Jennifer Garner was spotted with a friend on Monday, grabbing a quick bite together.

The 50-year-old Adam Project actress kept her ensemble casual and relaxed during her break from filming her latest project in San Francisco.

The mother-of-three has been cast to star in the Apple TV miniseries called The Last Thing He Told Me, and production for the show began in early May this year. 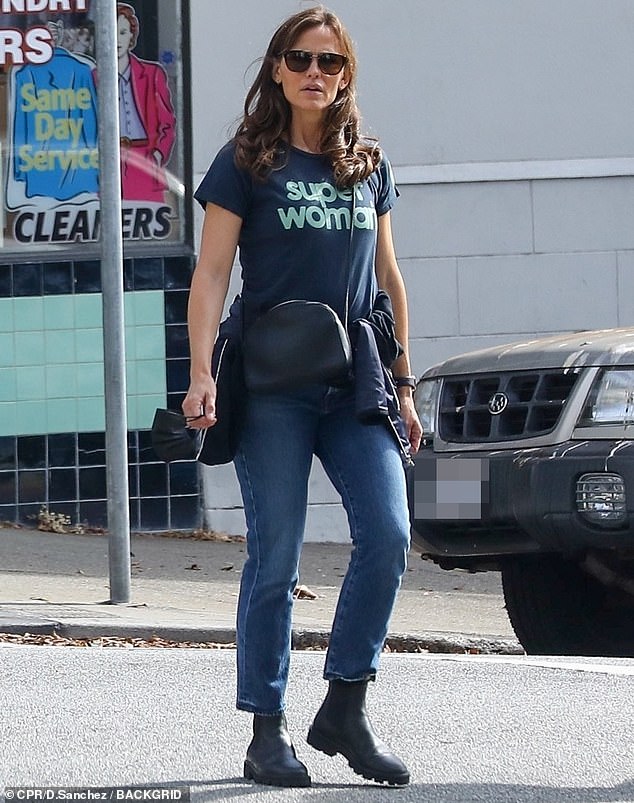 Casual outing: Jennifer Garner, 50, was spotted out for a quick lunch with a friend in San Francisco on Monday

The 13 Going On 30-star hotel chose comfort to head out into town for a delicious lunch.

She wore a short-sleeved t-shirt with the Super Woman printed in bold on the front.

Jennifer paired the top with classic blue jeans. For her short walk, the beauty slipped into black, rubber-soled boots.

When the day got a bit chilly or windy, the actress donned a navy blue jacket, which she left open.

Busy schedule: The talented actress was in San Francisco to film her latest Apple miniseries, The Last Thing He Told Me

The Golden Globe winner had her brunette hair parted in the middle while her long tresses cascaded down her shoulders in elegant curls.

She donned a pair of large, stylish sunglasses to protect her eyes from the bright afternoon sun.

Jennifer added a black cross-body purse that slung over her shoulder to stash a few essentials she needed throughout the day.

Excited: The star recently shared a photo on her Instagram of herself sending a smile on the set of The Last Thing He Told Me

Jennifer will play the role of Hannah Hall in the new Apple TV miniseries alongside other talented cast members such as Game Of Thrones’ Nikolaj Coster-Waldau and Criminal Minds star Aisha Tyler.

According to Variety, the show is based on a novel of the same name by Laura Dave.

The premise of the series follows Jennifer’s character as she tries to unravel the mystery behind her husband’s disappearance.

Filming recently began several months earlier in May and a set release date is yet to be confirmed.

Moving on: Jennifer appears to be in high spirits and moving on after her ex-husband Ben Affleck tied the knot with singer Jennifer Lopez; pictured in West Hollywood in March of this year

New Focus: The award-winning star is focused on raising her three children, whom she shares with Ex Ben, and her career; seen in Los Angeles in July

The couple first wed in July at the Little White Wedding Chapel in Las Vegas and embarked on a romantic trip to Paris with their children.

The Savannah wedding took place in front of a gazebo in front of close family and friends. At the time of the wedding ceremony, a source told People, “They’re going to have a pre-wedding party, ceremony and lots of fun.”

Jennifer and Ben’s three children, Violet, 16, Seraphina, 13, and Samuel, 10, were also in attendance. The Alias ​​star has been supportive of her ex-husband’s new marriage and continues to be co-parents with the Gone Girl actor.

Lavish wedding: Ben and Jennifer recently held a wedding ceremony in Savannah, Georgia in front of close friends and family on August 20; seen in 2021

Living her best life: Jennifer has moved on and co-parented her three children, whom she shares with Ben

https://www.dailymail.co.uk/tvshowbiz/article-11158917/Jennifer-Garner-pulls-Super-Woman-T-shirt-jeans-step-lunch-San-Francisco.html?ns_mchannel=rss&ns_campaign=1490&ito=1490 Jennifer Garner rocks a t-shirt and jeans to head out for lunch during a break in filming