Jessica Pegula advances to her FIRST US Open Quarterfinals in straight sets, setting up a potential showdown with World No. 1 Iga Swiatek

Crucially for Pegula, it’s her first time accomplishing the feat in Flushing Meadows.

The daughter of Buffalo Bills owners Terry and Kim meets Polish world No. 1 Iga Swiatek for a second time in a rematch of the French Open quarterfinals. 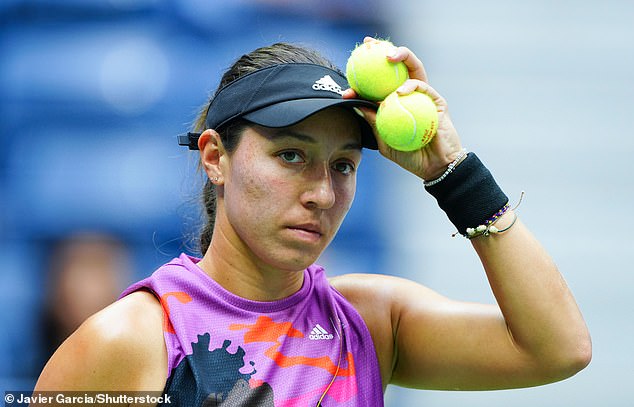 Jessica Pegula was in sensational form, dropping just one set in her first four games

Swiatek bounced back from a shock first-set loss to slip past German opponent Jule Niemeier to secure her spot in the last eight.

Pegula’s match against former two-time Wimbledon champion Kvitova was interrupted for about 45 minutes at 1-1 in the first set when it rained.

Arthur Ashe Stadium’s roof, while retractable, was only closed after a downpour soaked the pitch.

She reeled off the last three games of Monday’s opening set, which ended with a double fault from No. 21 Kvitova.

Pegula then reeled off the final six games of the match in the fourth round after falling 2-0 in the second set.

Despite the Open milestone, Pegula is 0-3 throughout her career in the Grand Slam quarterfinals.

Pegula meets number 1 Iga Swiatek (L) or Jule Niemeier (R) in the quarterfinals of the US Open.

These include losses at the Australian Open in January and the French in June.

Incidentally, the defeat in the last eight in Paris went to Swiatek. The couple meets on Wednesday.

Pegula is the highest-ranking American and the only native to place in the top 10 in both singles and doubles.

Pegula, who is half Korean, is the daughter of Buffalo Bills owners Terry and Kim Pegula

https://www.dailymail.co.uk/sport/tennis/article-11182571/Jessica-Pegula-advances-Open-quarterfinal-face-world-No-1-Iga-Swiatek.html?ns_mchannel=rss&ns_campaign=1490&ito=1490 Jessica Pegula is advancing into her first US Open quarterfinal and could face world No. 1 Iga Swiatek