Thousands of Australians have been stranded in Bali after multiple Jetstar flights were cancelled.

Since the beginning of September, several daily flights between Australia and Bali have been grounded due to technical problems.

About 4,000 Australians were affected at one point, a Jetstar spokesman told NCA NewsWire.

Some travelers have had to wait up to five days to be rebooked on another Jetstar flight or spend hundreds of dollars to book flights on another airline. 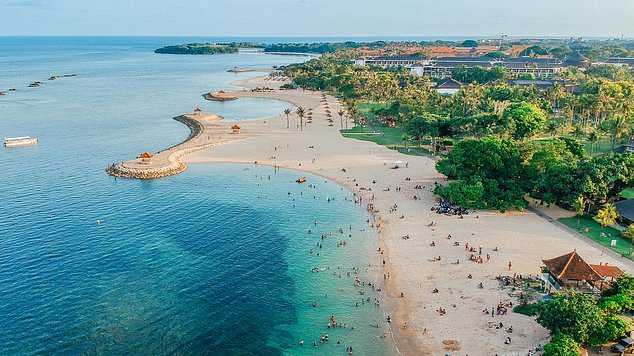 As of Monday, only 200 passengers were waiting for an alternative flight, the spokesman said.

Melburnian Meagan Mulder, her husband Adrian and two children, who were vacationing with 60 friends and family in the island hotspot, said their travel plans went smoothly until it was time to fly home.

“We had 12 friends who were on the midnight flight last night, their flight was cancelled, they can’t get another flight for seven people until Friday this week, so they had to get more accommodation and everything,” she said.

She explained that another four friends were forced to book flights with another airline and spent more than $10,000 on a detour to Kuala Lumpur.

“It’s a seven-hour delay for us, but we’re getting home,” Ms. Mulder said.

Melburnian Meagan Mulder, her husband Adrian and two children are stranded in Bali

Casey Emmerson and her friend Kim were supposed to be home on September 1st but are still stuck in Bali.

Cranbourne locals’ flights have twice been canceled by Jetstar as the couple struggle to find a way home.

“Our only way to get home faster is through Qantas, which costs over $1500 each, which we can’t afford as we still have to pay for housing, meals, dog sitting fees etc while we’re here before.” we will be reimbursed by Jetstar,” said Ms. Emmerson.

“Jetstar has told us the next flight they can get us is 8th September arriving on 9th September which is inconvenient for both of us.

“I’m self-employed and my girlfriend is a BAS agent… since we got stuck in Bali we’ve lost about $5,000 of income together.

Ms Emmerson said she also spoke to another woman who had to pay $5,500 to allow four people to return home.

The wife could not wait until September 9 as her husband ran out of blood pressure pills.

Another frustrated passenger, Pauline from Melbourne, had been trying to fly home from Bali for two days after losing her grandfather on Friday.

She finally boarded a plane with her family at 6:30 p.m. Sunday evening.

‘I am exhausted. I just want to fucking go home,’ she said.

“We have to go home.

“All flights were sold out, delayed, cancelled, we’ve been trying to catch the flight since Friday.”

Another passenger, Kylie from Melbourne, who was traveling with her two children and her partner, said she could not find any information about the changes to her flight on Sunday.

“The most frustrating thing was that three of the delays were not communicated to us, no information, no updates. Even online you couldn’t find the information,” she said.

The Jetstar spokesman said some flights between Australia and Bali’s capital Denpasar have been canceled due to “technical requirements”.

They apologized for the inconvenience caused by the disruption.

“Unfortunately, our Boeing 787 fleet was impacted by a number of issues including a lightning strike, a bird strike, damage caused by an object on the runway and delays in sourcing a specific spare part for one of our aircraft due to global supply chain challenges. The part must be shipped across the United States by road freight.

As of Monday, only 200 passengers were waiting for an alternative flight, a Jetstar spokesman said

“Our teams are evaluating all options to get passengers on their way as quickly as possible, including seating on Qantas flights and conducting ad hoc services where possible.

“A flight credit or refund will also be made available to passengers who no longer wish to travel.”

Jetstar’s fleet was impacted by numerous issues that required engineering work, including a lightning strike, a bird strike and delays in sourcing a specific spare part for one of the aircraft due to global supply chain challenges.

The airline has scheduled 26 flights from Australia to Bali from Monday to Thursday.

https://www.dailymail.co.uk/news/article-11180513/Jetstar-Bali-issues-Aussies-pay-thousands-home-sit-airport-hours.html?ns_mchannel=rss&ns_campaign=1490&ito=1490 Jetstar Bali problems: Aussies pay thousands to get home, sit for hours at the airport