Liberal Senator Jim Molan has died at the age of 72 after a long battle with prostate cancer.

His family released a statement on Tuesday, showing Molan’s health had deteriorated rapidly after Christmas before he died on Monday.

“He was many things — a soldier, a pilot, an author, a volunteer firefighter and a senator,” they said.

“Above all, he was a beloved husband, father, grandfather and brother. Our loss is immeasurable, but we are comforted in our memories of a fulfilling life lived courageously, devoted to family and serving the country he loved.’

He leaves behind his wife Anne, four children and five grandchildren.

Molan was a major general in the Army, which he served for 40 years before retiring in 2008 and entering politics in 2012.

He was diagnosed with an aggressive form of prostate cancer in 2021, but remains optimistic about his future battle with the disease. 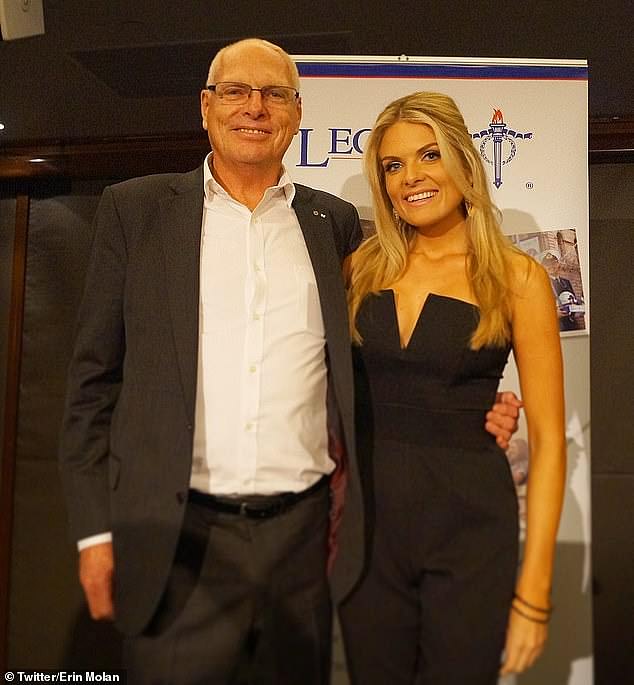 Senator Molan was a Major General in the Army, serving for 40 years and is survived by his wife Anne, four children and five grandchildren

“I receive the best possible care from my doctors and have the love, support and prayers of my family,” he said.

“I have never been afraid to lead the battles that must be fought and this is no exception.”

He took leave in April of the same year to start chemotherapy before returning to Parliament and being re-elected to a six-year term in the 2022 election.

Prime Minister Anthony Albanese paid tribute after the shocking news of his death.

“Jim Molan lived his life in the service of our country. He was a principled man and a politician by conviction. My condolences to his family, colleagues and friends,” he said.

“Jim’s high-level service in Iraq…was such as few Australian servicemen and women had ever experienced, such was the appreciation Jim’s military prowess was held.”

Another colleague and former Minister Keith Pitt said it was a “great loss” to Senator Molan’s family, Parliament and Australia.

“A guy who always takes your call,” Mr Pitt tweeted.

On Tuesday, his family released a statement confirming that Molan had died following a sudden decline in his health on Monday

“A deep thinker, an unstoppable force and a good friend – we will miss him.”

Sen. Simon Birmingham expressed his condolences and said the country had lost a “true patriot”.

“Jim Molan has served Australia as a soldier, senator, volunteer and strategist,” he said.

“A principled man willing to sacrifice for his beliefs, Jim embodied the best service to the nation.

“Jim’s passing will be met with great sadness by all of his colleagues, who all appreciated his continued commitment to Australia, his diligence as part of our Liberal Senate team and his thoughtful friendship.”

His sports presenter Erin broke down in tears and described her father as her “hero” shortly after the news of his diagnosis broke two years ago.

“He lived a lifetime of service to others and I grew up looking at him like he was my hero. He’s my best friend and we talk every day.’

In April 2004, he was seconded to Iraq for a year to serve as operations manager for the new headquarters of the multinational forces in Iraq

In 2016, Molan ran unsuccessfully as the Liberal Party candidate for the New South Wales Senate in the 2016 general election

“He’s an absolute fighter and when we got hit by the news we just wanted to hope and we got hope and there’s nobody I would support more to beat this fight because we need him too. We love you so much Dad.’

Molan was Commanding Officer of the 6th Battalion, Royal Australian Regiment and Commander of the 1st Brigade during his military career.

In April 2004, he was deployed to Iraq as operations manager of the new multinational force at headquarters.

For his roles in Indonesia and East Timor, he received an Officer in the Order of Australian, the Distinguished Service Cross and the Legion of Merit from the US government.

Molan retired in 2008 before being appointed special envoy for Operation Sovereign Borders under Tony Abbott’s administration.

He is credited with helping create the Stop the Boats and Asylum Seekers policies.

Molan ran unsuccessfully as the Liberal Party candidate for the New South Wales Senate in the 2016 general election.

Molan took over the role of Senator Arthur Sinodinos after resigning in November 2019.

He was re-elected to a six-year term in the 2022 election.

Molan was Commanding Officer of the 6th Battalion, Royal Australian Regiment and Commander of the 1st Brigade during his military career

* After finishing school he joined the Australian Army and graduated from RMC Duntroon in 1971.

* Played a key role as operations commander for coalition forces in Iraq, for which he was awarded the Distinguished Service Cross and the Legion of Merit by the Australian and US Governments respectively.

* He also received an Order of Australia for his service in Indonesia and East Timor before retiring in 2008.

* Entered the Senate in 2017 after Fiona Nash was disqualified by the High Court for having dual British citizenship.

* Defeated in the 2019 general election, but selected in November 2019 to fill a random vacancy created by Arthur Sinodinos’ resignation.

* Served as a volunteer firefighter and rescue helicopter pilot.

* Author of two books – Danger On Our Doorstep (about China’s rise and military build-up) and Running the War in Iraq – and a regular commentator on security issues.

* He is survived by his wife Anne, daughters Sarah, Erin and Felicity, son Michael and five grandchildren.