Joe Biden kept top secret documents at his Washington DC offices, it was revealed Friday, in addition to several other documents marked as classified.

The existence of the files from his time as Vice President was announced on Monday.

On Thursday, it emerged that a second find of documents was found at his home in Wilmington, Delaware. Some were kept in a garage with his beloved Corvette sports car.

It has now been revealed that several of the DC documents were top secret. None of those from Delaware were, CBS News reported.

A total of 20 documents were found at the two locations. 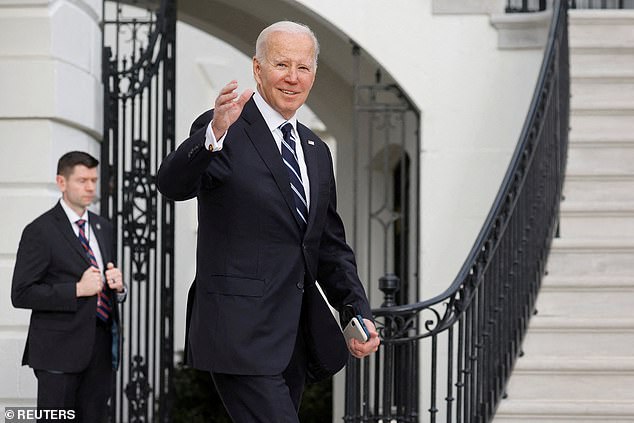 Joe Biden is seen leaving the White House on Friday to travel to his home in Wilmington, Delaware for the weekend. It emerged on Thursday that a tranche of classified documents had been illegally kept at the property

The Bidens’ lakeside home in Wilmington, where the President often spends his weekends

Secret documents were found in the garage of the Wilmington house

A special counsel was appointed on Thursday to investigate Biden’s handling of the documents.

Merrick Garland, the Attorney General, specifically authorized Robert Hur to investigate the “possible unauthorized removal and preservation of classified documents or other records”.

He is also permitted to “investigate all matters arising out of the initial investigation” handled by the US Attorney in Chicago, as well as anything that may arise “directly out of” his own investigation.

Biden’s team has denied any wrongdoing and has predicted he will be cleared of any crime.

“We have cooperated from the moment we notified the archives that a small number of documents had been found and we will continue to work together,” Richard Sauber, a senior White House counsel, said in a statement, adding that the documents were “accidentally misplaced” and not unlawfully mistreated.

The documents found in DC include US intelligence memorandums and intelligence materials covering issues such as Ukraine, Iran and the UK, CNN reported.

There was also a memo from Biden to President Obama, as well as two briefing memos preparing Biden for phone calls – one with the British Prime Minister, the other with Donald Tusk, the former Prime Minister of Poland who has served as President of the European Council since 2014-2019 .

It is unclear what was discussed in the Delaware documents.

“My Corvette is in a locked garage, okay? So it’s not like they’re sitting out on the street,” he said.

“But as I said earlier this week, people know I take classified documents and classified material seriously. I have also said that we are fully cooperating on the Justice Department’s review.’

The disclosure of the classified material is deeply uncomfortable for Biden, who condemned Donald Trump last year when it was revealed he had boxes of classified documents at Mar-a-Lago.

“How could that happen, how could someone be so irresponsible,” he told CBS News a year ago.

“And I thought: What data was in there that could compromise sources and methods. Just totally irresponsible.’

A special counsel, Jack Smith, was appointed in November to investigate Trump’s handling of classified documents.

Trump had more than 300 classified documents and spent months arguing with the Justice Department about their return.

In the end, the FBI searched Mar-a-Lago to secure the files, infuriating the former president.

White House press secretary Karine Jean-Pierre insisted on Friday that officials were not hiding from scrutiny as she faced a barrage of skeptical questions about President Joe Biden’s handling of classified documents.

And she tried to hit back when asked if it was a coincidence that the Treasury Secretary chose Friday to announce that the US is heading for a sovereign debt default in June, just as questions about documents in Biden’s garage at home intensified .

“Just to be perfectly clear, I’ve been in here almost every day since we got back from Mexico City … standing here and answering your questions at length so we don’t avoid anything here,” she said.

“And you’ve heard from the President at least twice.

“And we have presented several statements from the White House Office.

“Well, that suggestion, I just don’t agree with that.”

The White House has been fighting a pullback since reports Monday that classified documents had been discovered in a private office Biden used after he left the vice president.

Biden’s attorneys said on November 2, 10 classified documents were found at the Penn-Biden Center, a think tank in Washington, DC.

But the White House kept the discovery a secret for two months, until after the midterm elections, when the revelation could have been deeply politically damaging.

On Thursday, the White House acknowledged that other classified documents were found in the garage of Biden’s home in Wilmington, Delaware.

Amid mounting questions about the scandal, Janet Yellen provided bombshell news on Friday. The Treasury Secretary said the nation is likely to hit the $31.4 trillion debt ceiling by Jan. 19, forcing her department to embark on “extraordinary” cash management measures to avert a default by early June.

On Thursday, Attorney General Merrick Garland (right) appointed a special counsel to begin an independent investigation into Biden’s handling of the documents

Timeline of discovery of Biden documents and initial investigation

Nov 3: The National Archives were notified of the discovery

November 4: The Office of the Inspector General of the National Archives contacted a Justice Department prosecutor and informed him that classified material had been discovered at the Penn Biden Center. The documents were secured in an archive facility

November 9: The FBI began an evaluation to determine whether classified material had been mishandled

November 14: Attorney General Merrick Garland hired US Attorney for the Northern District of Illinois John Lausch to determine whether a special counsel was needed

12/20: The President’s personal attorney tells Lausch that more classified documents were found in Biden’s garage in Wilmington, Delaware. The FBI seized these documents

Jan. 9: The White House announces publicly classified documents from Biden’s time as vice president found in the office of his DC think tank

January 12: The President’s personal attorney informed Lausch that another document had been discovered at Biden’s Wilmington home

The issue sparked a series of questions in Jean-Pierre’s regular briefing, allowing her a break from questioning about the classified documents and the decision, made a day earlier, to appoint a special counsel to handle the investigation.

“What I can tell you is that we were not informed that Attorney General Garland was going to make his announcement about the special counsel yesterday,” Jean-Pierre said.

“We learned that, like many of you, from watching the news. I won’t go into that any further.’

She parried question after question, referring journalists to the Justice Department or the White House Legal Office until the inevitable happened.

Would she undertake to bring Presidential Advisor Richard Sauber to the briefing room to update him.

Instead, she urged journalists to contact his office directly.

“The Office of the White House Counsel has provided information on this this week, if appropriate,” she said.

Meanwhile, Republicans smell blood and have upped the ante.

In a letter to the White House, Rep. James Comer, the Republican chairman of the House Oversight Committee, said the address where the documents were found was listed as Hunter Biden’s address on his driver’s license until 2018.

“The Committee is concerned that President Biden kept classified documents in the same place where his son resided while conducting international business with opponents of the United States,” the letter said.

Comer asked for information on all classified documents retrieved by Biden aides at each location, as well as full lists of everyone who had searched for documents and locations that had been searched.

He also asked for all communications between the White House and the Justice Department and the National Archives and Records Administration (NARA).

Biden himself ignored questions raised on the subject on Friday as he welcomed Japanese Prime Minister Kishida Fumio to the White House.