Tim Cahill has revealed the Socceroos will leave nothing to chance ahead of their crucial game against Denmark on Thursday morning (AEDT) in Doha.

Australia’s all-time leading goalscorer provided a fascinating insight into how Graham Arnold’s side prepare for their date with football destiny – and it was impressive, to say the least.

The space-age Aspetar restoration facility is the ace up the sleeve for the Socceroos as they seek their first World Cup knockout round since 2006.

Hot and cold baths, treatment pools, massages and relaxation pods were all used by the likes of Mat Leckie, Ajdin Hrustic, Aaron Mooy, Riley McGree and Andrew Redmayne as Australia’s players prepared to shock the world at Al Janoub Stadium.

During training or regeneration, the 26-strong squad has the opportunity to refuel in Aspetar – and they are not short of opportunities. 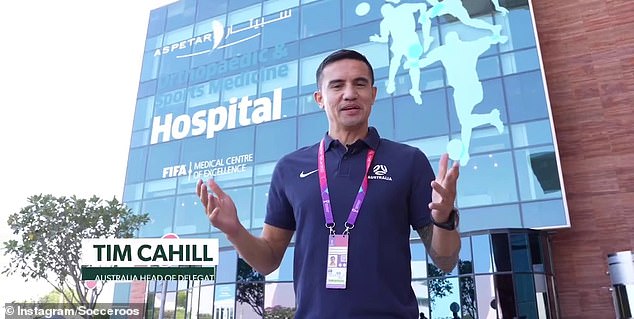 The likes of Ajdin Hrustic and Mat Leckie featured in Cahill’s clip, with recovery between games being crucial to the Socceroos’ chances of progressing to the knockout stages of the cup

Cahill, who lives in Qatar and is a global legacy ambassador alongside Brazilian legend Cafu, former Cameroonian striker Samuel Eto’o and Spaniard great Xavi Hernandez, is also chief sports officer at nearby Aspire Academy, which the Aussies have used as theirs training base.

While Cahill commented on the clip from the Aspetar facility, the former Everton midfielder said the key for the Socceroos is to make a difference.

“Recovery is a crucial aspect when it comes to excellence, that’s why we chose Aspetar ahead of the World Cup,” he said in the video.

“When the players need some time off, they can get together and play cricket or basketball.

“They come here to refuel their body, this environment is made for peak performance.”

As part of the powerful “specialized menu”, players also have the option to stretch and use the on-site gym.

Forward Jamie Maclaren – who credits Pilates with his longevity in the game – can be seen in the clip stretching while Ryan works on his upper body strength.

Middle East standout Craig Goodwin said the Socceroos are not afraid of Denmark, who need to win to advance through the group stage at Australia’s expense.

“We don’t want to be here just to see the World Cup,” he said. “We want to go as far as possible and do our best.

“We believe we can qualify for the knockout stages and get a result against Denmark.”

Kick-off at Al-Janoub Stadium is Thursday at 2am (AEDT).