Last weekend, police removed a group of lesbians calling themselves ‘Get The L Out’ from the Pride Cymru procession in Cardiff, claiming the women caused a ‘confrontation’ with trans activists and supporters.

Over the past few decades, we’ve grown accustomed to the notion that such pride marches are something we can all attend to celebrate diversity. But this incident tells me loud and clear that that’s just not true for lesbians like me anymore.

We are no longer welcome at such events; It’s time we broke away from the ever-growing list of identities that make up the current LGBTQQI acronym.

Has the rainbow acronym spread so far that it’s now meaningless? From my point of view, the voice alliance is now so deeply divided that it simply no longer makes sense for us, who have been campaigning for equality for lesbians and gays for years. 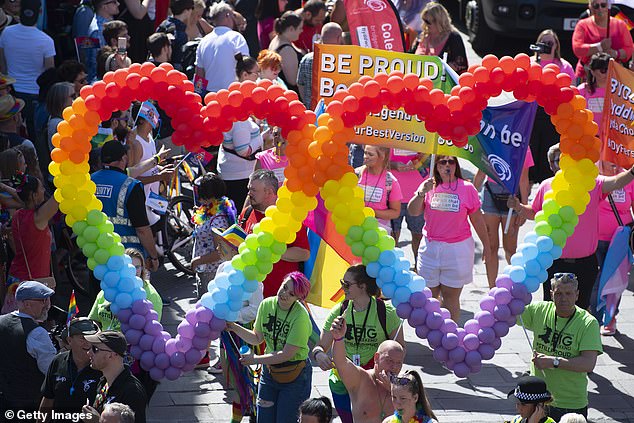 Alongside a growing number of lesbians, I think we’ve become increasingly invisible and irrelevant over the last few decades.

I have been told that my 40+ years of campaigning for lesbian rights and against all forms of discrimination against women is irrelevant because I have dared to speak out against Stonewall’s transgender ideology, which apparently embraces the entire same-sex gender has captured community.

I’ve been labeled “homophobic,” “biphobic,” and “transphobic” for asking when lesbians are getting attention from the so-called LGBT organizations that claim to speak on my behalf.

Get The L Out is a grassroots campaign group formed to fight back. They were with Pride Cymru to protest the continued invisibility and marginalization of lesbians within the ever-expanding Pride umbrella.

Many gay men have turned viciously on us

This includes, I think, more straights than gays now, such as male “kinsters” who have a penchant for choking women, or those with a foot fetish, all of whom can be defined as queer in the modern sense of rainbow flag advocates.

Police accused the women of “causing confrontation”, to which one protester replied: “We are lesbians: it’s Cardiff Pride.”

The women made it clear to the police that as lesbians they have every right to be there. The call for respect and inclusion doesn’t have to be confrontational, but Get The L Out made an important point: that Pride has been taken over by groups that seem to have a deep dislike for lesbians.

Yet it was they who were forced to leave – not the trans supporters who yelled at them and grabbed their banners.

Police claimed Get The L Out did not register as a protest group for the march and therefore have no right to be there – but at Pride of all places these women should have the absolute right to speak out. They talk about issues that have had a profound impact on young lesbians.

What on earth made us do this? How come lesbians feel so unwelcome in our supposedly own community?

Julie Bindel (pictured) has been labeled “homophobic”, “biphobic” and “transphobic” for asking when lesbians would receive attention from LGBT organisations

And why have so many gay men joined extreme trans activists and turned against us so viciously? The truth is that this schism in the LGBT alliance is nothing new.

I was beaten up by fascists in gay clubs while gay men turned a blind eye, and then not believed by the police when I reported it. I know many women who have had the same thing.

I was attacked outside Edinburgh University after giving a speech on male violence for being considered a bigot for disagreeing that ‘trans women are women’.

I thought lesbians had come a long way since the 1970’s when neither we nor gay men were legally protected from discrimination. The very word “lesbian” was felt to be off-putting, and I felt pressured to use the term “gay” to soften the blow.

Neighbors in our neighborhood told me I was a pervert and unsafe to babysit their kids; They asked if something happened in my childhood that made me “hate men.”

The current, tongue-twisting acronym given to Julie in its most expansive form is LGBTQQIAAPPO2S

After first encountering feminists in 1979 when I was 17, I finally began to be proud of my sexuality.

We shared some social spaces with gay men because we weren’t wanted in mainstream society, but while we played well, our common ground was always limited. After all, we were women and were therefore confronted with sexism in addition to other forms of discrimination – often by gay men themselves.

As we moved into the 1980s, in addition to gay pride marches, we began holding women-only Lesbian Strength marches—named in recognition of the fact that in those days it took a certain amount of courage and tenacity to to be an out lesbian.

Stereotypes of being “butch” have caused many women to dismiss the term, but we’ve managed to defy those stereotypes to a degree. Lesbians are often severely punished for sexually rejecting men, and in my experience they are under far more pressure to marry a man and do the conventional.

Gay men, on the other hand, now have more freedom to live their own lives, and I think they’re much more celebrated in society and popular culture these days than lesbians.

Lesbians are labeled as bigoted and fascist

Of course, when the AIDS epidemic hit in the mid-1980s, it brought with it terrible prejudice, bigotry, and violence against gay men. Many lesbians have directly supported gay men during this terrible time.

Section 28 (the homophobic legislation that banned schools from “encouraging homosexuality”) was introduced by the Thatcher government in 1988. This was the first time ever that lesbians and gays have been attacked together by lawmakers and we joined forces. But for many lesbians, it was an unfortunate alliance.

So cemented together we became “lesbian and gay,” then LGB to include bisexuals; and after that, the initials of other groups that have nothing to do with same-sex attraction at all (like transgender, asexual, aromantic, and queer) were simply added.

The current tongue-twisting acronym, in its most expansive form I’ve ever heard, is LGBTQQIAAPPO2S. As my friend Simon Fanshawe pointed out, this is more of an uncrackable WiFi code.

While lesbians and gay men are vilified for same-sex attraction, others represented by those letters don’t necessarily have anything in common with us. And no one has the right, whether they represent G, T or Q, to tell lesbians what to do.

Today, the word “lesbian” is once again stigmatized. Young lesbians seem to be under pressure to call themselves queer, non-binary, or to become trans men.

And we’re under pressure not only to accept the idea that trans women with male bodies are lesbians, but also to accept them as sexual partners.

Stonewall CEO Nancy Kelley has branded the notion of lesbians rejecting trans women as “analogue to issues like sexual racism.” As someone who has been told that all I need is a “good man” to “cure” me of my sexual perversion, that doesn’t sit well with me.

It is amazing to me that lesbians can be told that we are bigoted, fascist and discriminatory when we dare to complain that male trans women who identify as lesbians do not belong in our groups – or in ours dating pool.

I think the Get The L Out women are valiantly campaigning for lesbians to be able to choose what it means to be same-sex (as opposed to “same-sex”) dressed.

The good news is that the Lesbian Strength, which fizzled out in the 1990s, is back and set to march in Leeds later this month. For my part I will be there. It is high time that we focus on our own needs and the community – and realize that we are no longer welcome at Pride.

We have fought long and hard for lesbians to be accepted into mainstream society and we will not be pushed back.

https://www.dailymail.co.uk/femail/article-11165667/JULIE-BINDLE-says-time-break-growing-list-identities-make-LGBTQQI.html?ns_mchannel=rss&ns_campaign=1490&ito=1490 JULIE BINDEL says it’s time to break away from the ever-growing list of identities that make up LGBTQQI