Already on the easy road! Julie Chrisley is sent to the MEDICAL CENTER near Minimum Security Prison, where she is to serve seven years

After pulling up in a black Escalade at Lexington, Kentucky’s Federal Medical Center earlier this week, Julie, 49, began her stay at the prison medical center.

However, Julie’s stay in medical prison does not appear to indicate that she is currently on medical treatment. TMZ reported that a source close to the Chrisleys confirmed that she does not require any medical attention at this time.

The facility is described as a medical center with a nearby minimum-security detention center where Julie will serve, according to a Bureau of Prisons representative. 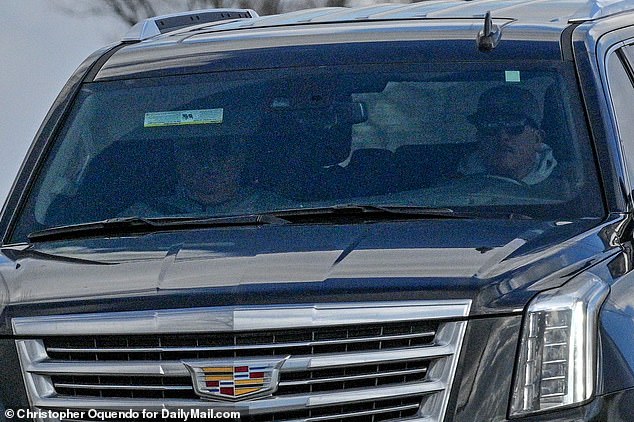 Exclusive DailyMail.com photos show Julie, 49, arriving at the Federal Medical Center (FMC) in Lexington, Kentucky, in a black Cadillac Escalade with her father Harvey and an unknown driver

The Federal Medical Center in Lexington, Kentucky, where Julie Chrisley reported earlier this week to begin her seven-year stint behind bars

It’s unclear why Julie’s prison location was switched at the last minute. She was originally scheduled to serve her seven-year sentence at FCI Marianna in Florida, which would have been closer to her husband Todd’s facility.

Todd began his 12-year prison sentence at the same time as Julie. He is serving at the federal prison camp in Pensacola, Florida.

Some fans of Julie speculated that her admission to a medical facility could portend a return of the breast cancer she battled in 2012. However, her condition had reportedly improved to the point that doctors gave her permission last year to stop taking anti-cancer drugs.

FMC Lexington is also currently home to another disgraced reality star – Jerry Harris of Netflix’s Cheer. The 23-year-old is serving a 12-year sentence for child pornography.

Julie and Todd have reportedly already begun to settle into their new normal in their respective prison camps.

Meanwhile, Todd, 53, was caught surrendering at his Federal Prison Camp after arriving in a blacked-out Range Rover. He is prisoner number 72600-019.

Later Tuesday morning, 650 miles away, Todd, 53, was caught surrendering at Federal Prison Camp in Pensacola, Fla., after arriving in a blacked-out Range Rover

The FPC has been described by Forbes as the second “most comfortable prison” in the United States, and legal experts likened it to a “college dorm room.”

Todd and Julie were found guilty of bank fraud and tax evasion, as well as filing false documents with banks to take out loans allegedly more than $30 million to fund their opulent lifestyle.

They also used a production company to hide earnings from the IRS, attorneys argued.

Todd was sentenced to 12 years in prison and Julie to seven, with a 16-month probation period for both after their release.

https://www.dailymail.co.uk/news/article-11653607/Julie-Chrisley-admitted-MEDICAL-CENTER-nearby-prison-set-serve-7-years.html?ns_mchannel=rss&ns_campaign=1490&ito=1490 Julie Chrisley was taken to the MEDICAL CENTER near the prison where she is to serve 7 years

What is MIT in Overwatch 2?