Kanye West isn’t ready to part with one of his massive ranches in Wyoming.

The 45-year-old rapper has pulled one of his two ranches from the market after initially trying to sell them for $11 million, according to the New York Post.

The ranch went on the market in October, but West appears to have received only lukewarm offers. 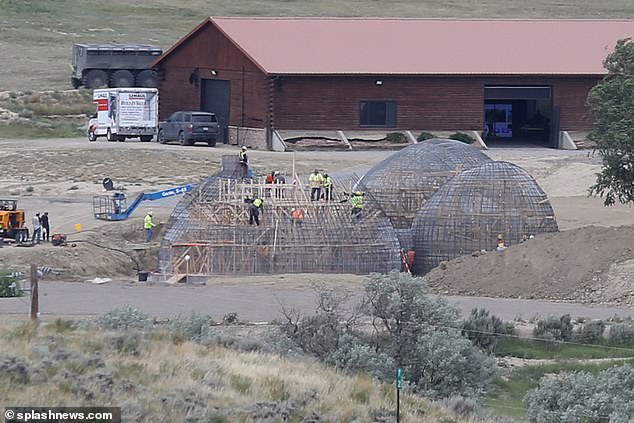 Break: Kanye West, 45, has taken his Monster Lake ranch in Wyoming off the market after originally listing it for $11 million in October, the New York Post reported

The ranch was known as Monster Lake Ranch at the time the producer bought the property, but he later changed the name to West Lake Ranch and referred to the property as the “Yeezy Campus.”

West owns another property about 50 miles from Monster Lake covering around 6,700 acres that cost him a whopping $14.5 million.

His Monster Lake Ranch offers stunning views of the nearby Rocky Mountains and is just over 50 miles from Yellowstone Natural Park, according to People.

According to the Post, West owns three of the eight lots on the ranch. On its plots are eight high-end cabins that can accommodate up to 20 people.

He has further adapted the property by buying up neighboring land, and property documents obtained by the publication show that he did not construct additional buildings on the property until January 2022.

The latest additions give his portion of the ranch an impressive total of 27 bedrooms and 17 bathrooms, though it’s not clear if most of these will ever be occupied.

According to Fox Business, the property included a barn for horses and a corral, as well as a go-kart track and restaurant for guests.

Back in 2020, West’s then-wife Kim Kardashian revealed that he had purchased a 14-horse pack of rare Friesian horses, which can cost as much as $600,000 per horse.

The animals have magnificent, thick manes and are particularly rare in the USA.

Bad times: West’s Wyoming real estate was reportedly a problem in the final days of his marriage to Kim Kardashian as he wanted her and their four children to move around all their time

West’s Wyoming real estate had reportedly been a point of contention in the final days of his marriage to Kardashian, as he appeared to want her and their four children to move to the state full-time.

He also spent much time away from his family while living and working at the ranch amid his doomed presidential campaign.

Last December, it was reported that the Monster rapper had bought a $4.5 million home directly across from his ex-wife’s Hidden Hills home, where she lives with their children North, nine; saint, six; Chicago, four; and Psalm, three.

However, it was later reported that he planned to demolish the building and build a new house in its place.

Doubled: West also owns a second, even larger ranch in Wyoming. In November, he sold his fleet of massive black trucks, suggesting he has no immediate plans to build; seen with Chaney Jones in Miami in March

In April 2020, West told GQ that he had dug something the “size of a spaceship” at his Monster Lake ranch and created “dome apartments” for guests to sleep in when attending Sunday services.

However, he sold a fleet of huge black trucks he bought for his Wyoming properties in November last year, suggesting he may have lost interest in making big changes.

In September, he bought a $60 million property in Malibu and was recently spotted overseeing work on the property.

https://www.dailymail.co.uk/tvshowbiz/article-11170983/Kanye-West-takes-Wyoming-ranch-market-listed-11million.html?ns_mchannel=rss&ns_campaign=1490&ito=1490 Kanye West is taking Wyoming ranch off the market after listing it for $11 million

Serena and Venus Williams vs. Lucie Hradecka and Linda Noskova – US Open: Live Results and Updates