Karl Stefanovic appeared to have finally had sufficient rest after a few days of chaos – after he intervened in a blazing row between the former Australia cricket captain and his wife Jade Yarbrough at a public park in Noosa.

Wild footage of a heated exchange between Clarke and his girlfriend was leaked on Wednesday, with Yarbrough accusing the former cricketer, 41, of sleeping with his ex Pip Edwards behind her back on December 17.

On Saturday, Stefanovic looked relaxed during his morning coffee run near his home in Sydney’s northern suburbs. 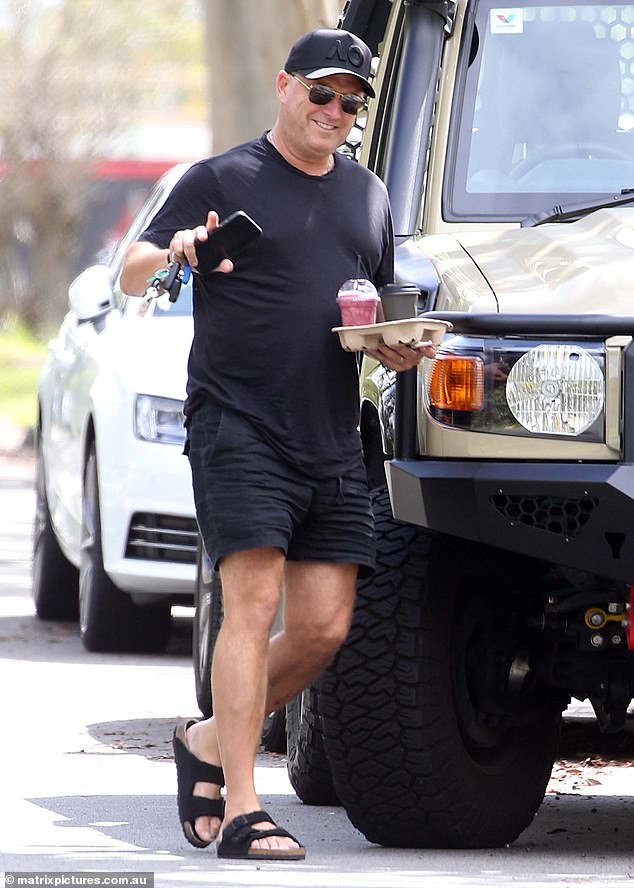 The Today show host, 48, smiled but stayed focused as he carried a tray with two takeaway coffees and a pink smoothie – perhaps for his daughter Harper, two.

He wore aviator glasses and a bunch of keys as he walked back to his car.

It comes after an exhausted Stefanovic made his way through Melbourne Airport to return to Sydney on Friday.

On Saturday, Stefanovic looked relaxed during his morning coffee run near his home in Sydney’s northern suburbs

The Today show host, 48, smiled but stayed focused as he carried a tray with two takeaway coffees and a pink smoothie

Despite his tiredness, he seemed in good spirits as he walked through security.

The Breakfast TV presenter, 48, admitted he was “quite tired” on Friday’s Today show after traveling from Sydney to Melbourne for Nine’s Australian Open coverage on Thursday.

Stefanovic blamed his fatigue for staying up all night to watch the thrilling Australian Open tennis match between Andy Murray and Thanasi Kokkinakis, which lasted five hours and 45 minutes before ending at 4:05am.

However, it’s also possible he played peacemaker into the wee hours, taking frantic calls from his wife, sister-in-law and good pal as they struggled with their dirty laundry being so publicly aired.

In footage of the brawl, Stefanovic can be seen intervening in a simmering argument between Clark and Yarbrough in a public park after accusing Clarke of cheating on her with Edwards.

The 60 Minutes reporter is yet to comment on the ordeal but was asked about the footage during an event at the Australian Open on Thursday.

According to the Herald Sun, he smiled when asked about the incident.

“You know what the answer will be,” he replied.

Clarke and Jade Yarbrough were filmed having an explosive argument on a Noosa street. Clarke’s partner accused the former Australia cricket captain of cheating on her

Dramatic footage, made available to the Daily Telegraph, shows a shirtless Clarke being yelled at and hit by his angry girlfriend while others in the group, including Stefanovic and famed accountant Anthony Bell, try to defuse the commotion.

Viral video of the Noosa incident shows Yarbrough accusing Clarke of sleeping with Edwards on December 17 and texting her that she is the “love of his life”.

All hell broke loose when Clarke, Stefanovic and the Yarbrough sisters had dinner with Bell at a beachfront restaurant in Noosa.

The video begins with Yarbrough yelling at Clarke before slapping him in the face and pushing him away after the cricketer insists he hasn’t cheated on her.

Viral video of the Noosa incident shows Yarbrough accusing Clarke of sleeping with Edwards on December 17 and sending her a message that she is the “love of his life” (Jade pictured left, kissing Karl and Jasmine supported in their first appearance as a couple in May 2017 )

As she is led away, Yarbrough is heard crying as she turns to Clarke and wails, “I f**king hate you.”

Clarke then tries to follow Yarbrough before unleashing a wave of anger on Stefanovic, seemingly for walking away with the two sisters.

Stefanovic’s decade-long friendship with Clarke is reportedly over.

The Today show host is “done” with the sports star, and sources tell New Idea that “Michael sent texts to Karl and another to Jade’s parents.

“So far they have fallen on deaf ears.”

“Karl wants Jade to cut her losses and move on and meet someone else and let Michael learn his lesson the hard way.”

How to improve Overwatch 2 FPS and performance