The Princess of Wales chose a necklace that appeared to have personal meaning for her engagement at Hampton Court Palace yesterday.

The royal mother-of-three, 41, looked effortlessly elegant in a £1,200 Roland Mouret burgundy suit as she arrived at her reception for members of the English wheelchair rugby league team.

Over her thin white jumper, Kate wore an £825 necklace from one of her favorite jewellers, Daniella Draper.

The brand’s Gold Citrine Baby Treasure Necklace features a thin and dainty chain and features one of November’s birthstones. 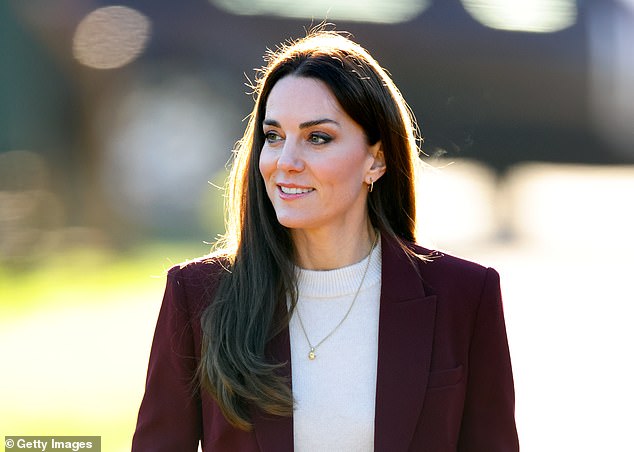 The Princess of Wales wore a burgundy suit by Roland Mouret for her engagement at Hampton Court yesterday. The mother-of-three completed her outfit with his £825 gold chain by Daniella Draper

According to the product description, this particular stone, which can vary from a pale yellow hue to a deep amber, is said to promote positivity in the wearer’s life.

The website states: “The citrine, the birthstone for November, helps to achieve your greatest dreams and bring more success and prosperity.”

The royal mother-of-three was previously pictured wearing two of the brand’s gold necklaces – both with her children’s initials.

In May 2021, Kate wore a £495 Daniella Draper necklace with ‘G’, ‘C’ and ‘L’ charms while visiting a tennis court in Scotland with Prince William.

The amber pendant “shows dreams and brings success,” according to the designer. The dainty necklace retails at £825

She also owns the £1,070 Personalized Gold Midnight Moon Necklace, engraved with the letters G, L, C and a trio of stars.

Kate wore this piece during a visit to Cardiff in January 2020 to launch a landmark early childhood development survey.

Online, the product description states: “The moon universally represents the rhythm of time as it embodies the cycle. The phases of the moon symbolize immortality, eternity and enlightenment.”

Daniella Draper, who hails from Cleethorpes, Lincolnshire, previously revealed that her fledgling business struck a chord at 21 when Kate Moss was photographed with an “armful” of her silver bangles.

Over a decade later, her brand is now loved by Ellie Goulding, Brooklyn Beckham, Ed Sheeran and Chloe Grace Moretz — and now royalty.

The necklace was engraved with ‘G, L, C’ in tribute to Prince George, Princess Charlotte and Prince Louis – and was complete with a trio of stars (pictured)

In his bombastic memoir Spare, which hit shelves earlier this month, Prince Harry claimed he was encouraged by his brother and sister-in-law to wear a controversial Nazi costume to a costume party.

Elsewhere in the book, the Duke of Sussex also shared personal text messages from Kate and Meghan Markle about Princess Charlotte’s bridesmaid dress ahead of his 2018 wedding.

Harry insists the incident was caused by his sister-in-law Kate, who seemed irritated that Meghan had taken a day to get back to her about the issue.

The disagreement between the two women, he claims, was exacerbated by Kate’s refusal to visit Meghan’s tailor at Kensington Palace and the suggestion that a party be thrown for the page boys when his bride-to-be was engaged in an argument with her father , Thomas Merkle.

Kate and Meghan exchanged a series of texts (reproduced above) about the bridesmaid dress, according to Harry

After informing Kate that she had arranged a tailor to sort Charlotte’s dress, the Princess of Wales reportedly told Meghan that her “own wedding dress designer” agreed with her that the dresses should be remade.

Harry writes: “Meg asked if Kate knew what was going on. With her father. Kate said she was well aware, but the clothes. And the wedding is in four days!’

He also claims that his sister-in-law “had issues with the way Meg planned her wedding. Anything to do with a party for the bellboys? It went back and forth’.

Speaking of his wife, the prince said: “I’m not sure what else to say. If the dress doesn’t fit, please take Charlotte to Ajay’s. He’s been waiting all day.”

Harry states that he returned home a short time later, suggesting that he and his ghostwriter got a report of the actual conversation from Meghan to find his fiancée “sobbing on the floor”.

While he says he was “appalled” to see her so upset, he didn’t consider it a disaster as emotions were understandably running high. He told Meghan that “Kate meant no harm”.

He suggests his point was proved when the then-Duchess of Cambridge stopped by with flowers and a card to apologize the next morning.

Over the years, there have been different versions of who made whom cry.

It was originally claimed Meghan made Kate cry, a suggestion that so enraged the Sussexes that they went to war with their press office and demanded that they issue a correction.

When officials refused, saying it would raise further questions about the incident and set a precedent for speaking about private family matters, the couple decreed that it was another example of the palace unwilling to stand up for them.