Sir Keir Starmer has vowed to support Rishi Sunak if he strikes a deal with the EU over Northern Ireland – urging him to ignore the hard-line Eurosceptic Tories’ “Brexit cult of purity”.

Visiting Ulster, the Labor leader said he was ready to provide “any political cover you need” to end years of rows over trade.

Speaking at Queen’s University in Belfast, Sir Keir said it was time for Rishi Sunak to face the hardliners at the Tory European Research Group (ERG) when they try to block a deal.

“Whatever political backing you need, whatever mechanisms you need in Westminster, we will support you where it is in our national interest and the people of Northern Ireland,” he said in a message to the Prime Minister. 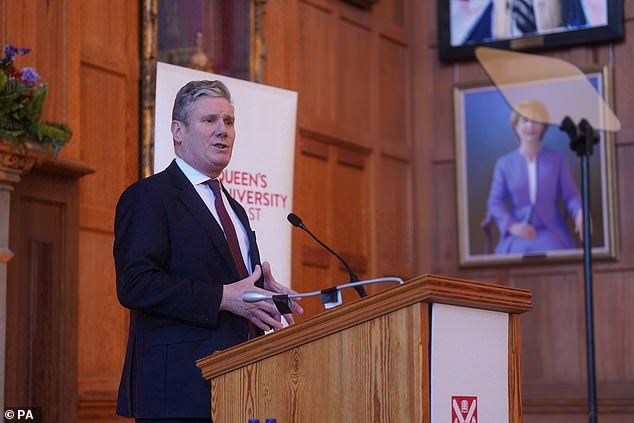 Visiting Ulster, the Labor leader said he was ready to provide “any political cover you need” to end years of rows over trade

Speaking at Queen’s University in Belfast, Sir Keir said it was time for Rishi Sunak (pictured in Scotland today) to face hardliners at the Tory European Research Group (ERG) when they try to block a deal.

Sir Keir is in Northern Ireland meeting local political leaders in the hope that an agreement can finally be reached before the 25th anniversary of the Good Friday Agreement.

The protocol was scrapped by then Prime Minister Mr Johnson and the EU in 2019 to break the deadlock on Brexit implementation.

To avoid a hard border on the island of Ireland, customs and food safety controls and procedures were moved to the Irish Sea, creating economic and administrative barriers to the movement of goods between Great Britain and Northern Ireland.

The protocol is vehemently opposed by many unionists and the DUP is currently blocking the work of a devolved government in Belfast in protest at the agreements.

The region’s main trade union party claims the Protocol undermined Northern Ireland’s place within the Union without the consent of the trade union community.

Sir Keir, speaking at Queen’s University Belfast, called on the UK government to “normalize and strengthen” relations with the Irish government.

Sir Keir called for a “change of direction from the Prime Minister” and told the audience: “The UK Government needs to normalize and strengthen relations with Dublin.

“Honestly, relations should never have been this strained. Brexit was a break in the UK’s diplomatic stance, a call for change in all areas of our society that needed to be acknowledged. I have made that very clear. My government will make it work.”

He said: “Nothing has been more self-defeating than the determination of some Conservative ministers to see our friends in Dublin as opposed to Brexit. It has hurt the political process here in Northern Ireland, no question.

A ministerial spokesman No. 10 was still working with Brussels to resolve the outstanding issues.

“We continue to work closely with our EU counterparts. It remains our ambition to reach an agreement with the EU as soon as possible,” said the spokesman.

“Obviously, as the Prime Minister has said, he would like to have broad agreement on the problems that the protocol is known to face.”