He recently attempted to recreate a viral dance from his classic film Footloose, which left his wife Kyra Sedgwick with an injured wrist.

But Kevin Bacon opted for a far more low-key performance on Sunday, when he posted a video to social media of himself singing an acoustic cover of Beyoncé’s new son, Heated.

The 64-year-old actor strummed a red guitar while sitting on a wooden platform at his Connecticut farm while his curious goats climbed up for a closer look. 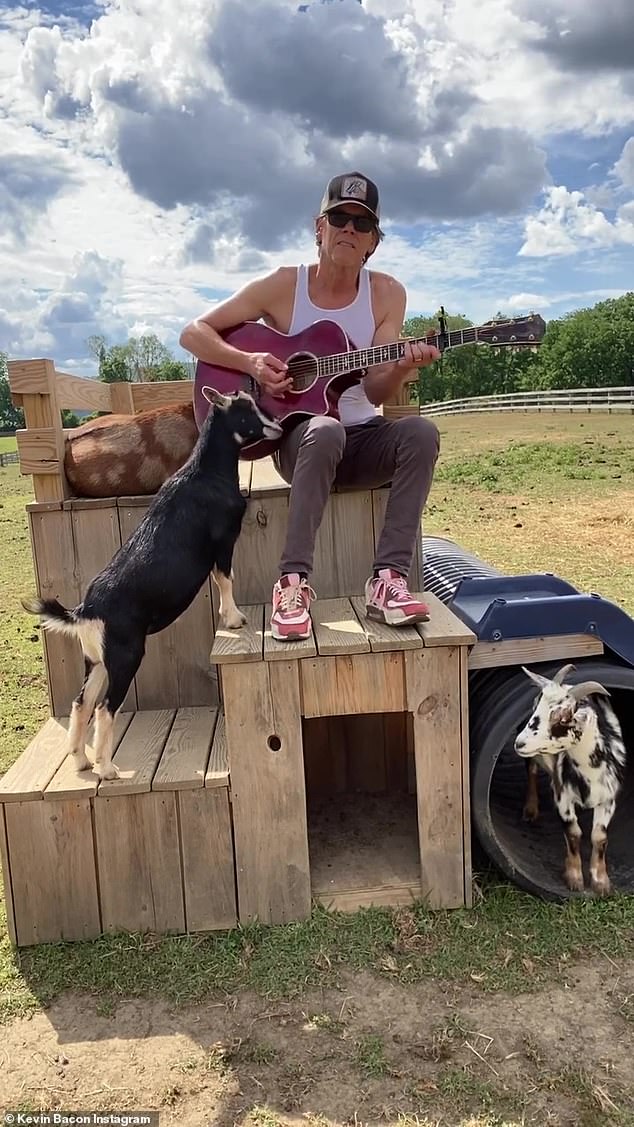 Barnyard Crooner: Kevin Bacon, 64, showed off his singing and guitar skills on Sunday when he posted a video of himself covering Beyoncé’s new song “Heated.”

Kevin’s video showed him sitting on a wooden platform that appeared to be a playground for his goats, with an open hide under his feet and a long plastic tube for them to walk to his side.

He was dressed casually on the sunny day with a white tank top, slim gray jeans and red and white sneakers while sporting a gray trucker hat and sunglasses.

“Hot day, hot song,” he said at the beginning of his clip, before beginning to strum his guitar.

Beyoncé’s original song, featured on her latest hit album Renaissance, begins with a sparse reggaeton beat, but Kevin’s version was radically different, with its whispered vocals and syncopated guitar.

Party Music: The song, which features a reggaeton beat and extended rapped coda by Beyoncé in the studio version, was included on her latest studio album, Renaissance

With an audience: Kevin’s lo-fi video showed him perched on a wooden platform that looked like a playground for his goats

Help from his friends: “He actually played!” Kevin exclaimed mid-performance after the black goat nibbled the strings and accidentally plucked a high note

Renaissance’s version of Heated ends with Beyoncé delivering a swaggering rap, but the Apollo 13 actor skipped that part and focused on the actual song.

Kevin’s goats couldn’t seem to get enough of his sweet tones, and one black goat climbed up the platform to nudge his guitar while another lay relaxed on its side behind him.

“He actually played!” exclaimed Kevin midway through his performance after the black goat nibbled on the strings and accidentally plucked a high note.

“The goats and I are feeling hot @Beyonce. I love this track. #GoatSongs #Renaissance,” Kevin added in his caption.

Love it: “The goats and I are feeling hot @Beyonce. I love this track. #GoatSongs #Renaissance,” Kevin added in his caption

‘That was pretty good!’ he said approvingly at the end of the clip before lovingly stroking his goats.

The album was an instant hit, debuting at the top of the Billboard 200 albums chart and receiving widespread critical acclaim.

Though he showed he’s still a capable singer, Kevin is better known as a dancer thanks to his breakout role in Footloose.

Earlier this summer he joined a viral dance from the film in which he had to hold his wife Kyra Sedgwick up sideways before dropping her and snapping her up by the arm.

The maneuver didn’t go as well as it appeared in the video, as he later shared a photo of the actress covering her injured wrist with ice.

still have it! Though he showed he’s still a capable singer, Kevin is better known as a dancer thanks to his breakout role in Footloose. Earlier this summer, he and his wife, Kyra Sedgwick, attempted a viral dance from the 1980s film

Ouch: The maneuver didn’t go as well as it appeared in the video, as he later shared a photo of the actress icing her injured wrist

https://www.dailymail.co.uk/tvshowbiz/article-11158687/Kevin-Bacon-serenades-GOATS-acoustic-cover-Beyonces-Heated-farmhouse.html?ns_mchannel=rss&ns_campaign=1490&ito=1490 Kevin Bacon serenades his GOATS with an acoustic cover of Beyonce’s Heated from his farmhouse