Kevin Spacey kept a low profile as he disembarked in Rome, Italy on Thursday.

The 63-year-old actor was holding a copy of Prince Harry’s controversial newly released memoir Spare as he got into a car to take him to the airport.

His outing comes ahead of a sexual assault trial in June, but he has strenuously denied the criminal charges against him, which are due to be heard in London. 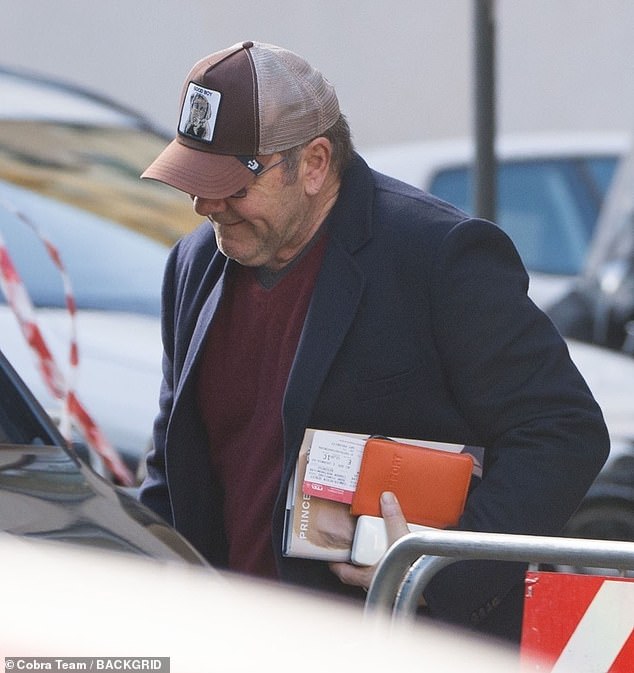 Outing: Kevin Spacey kept a low profile as he appeared with a copy of Prince Harry’s book Spare on Thursday in Rome, Italy

The House of Cards star wore thin-framed glasses and showed off some facial hair.

In addition to reading for the plane, he also had his passport in an orange case and his plane ticket with him.

Chilled: He wore a sleek navy coat over a burgundy sweater and gray t-shirt, and accessorized with a casual baseball cap

It comes after Kevin thanked the Italian National Cinema Museum for having “the balls” to take him in while accepting the Stella della Mole (Lifetime Achievement) award.

The Oscar winner said he felt “truly blessed and grateful” to be honored at Monday’s ceremony.

He donned a tuxedo and gave a master class while being hailed for his contribution to the growth of cinema – a decision that has proved controversial in the country.

Kevin – who saw a number of allegations leveled against him in the wake of the #MeToo movement – also presented a screening of his 1999 film American Beauty.

Wow! It comes after Kevin thanked the Italian National Cinema Museum for having “the balls” to take him in while accepting the Stella della Mole (Lifetime Achievement) award

He told the audience, “The first performance I ever did was in my drama class in junior high school. It was a little five minute scene that we had to create without words.

“But we could have music. I was 11 years old. And I decided to do a western scene so I could play a cowboy. Well, a bank robber. The villain, of course.

“I am so honored to have been part of the creative process with so many remarkable people. Filmmakers, artists and technicians I have had the privilege of working with.

“Who wouldn’t see the perfect opportunity to say ‘Thank you!’ accept? You don’t just honor me. you honor them all

“I am truly blessed and grateful and humbled. And my heart is very filled tonight by the National Museum of Cinema because it had the le palle to invite me tonight.’

“Le palle” means “a pair” in English and is used by Italians as “having balls”. He then thanked his manager Evan Lowenstein for his loyalty.

Kevin added: “It’s almost impossible to tell you everything he’s done. The level of guidance and wisdom he brought to my life. He is different from everyone else.

Honored: The actor said he felt “truly blessed and grateful” to be honored at Monday’s ceremony

“He’s a remarkable man and it was his ability to take all the setbacks we faced and kind of get up and move on.

“And that gave me the strength to kind of get up and follow him. I am truly blessed to have you as my brother. The brother I never had, so thank you.’

The sold-out events have been billed as Kevin’s first speaking engagements since the #MeToo era allegations.

The actor, who was shooting his last film, directed by Franco Nero, The Man Who Drew God, appeared in Turin in good spirits, smiling happily as he put on an animated performance during his time on stage.

The two-time Oscar winner lost his starring role on the Netflix series House of Cards and saw other opportunities dry up after sex abuse allegations surfaced in 2017.

Announcing the award in November 2022, Museum President Enzo Ghigo said: “We are honored that a guest as distinguished as Kevin Spacey has chosen Turin and our museum for this long-awaited return to an audience event.

“Well, among all the cities in the world, he chose Turin for a master class. He couldn’t have given us a better gift,” Domenico De Gaetano, director of the National Museum who will moderate the master class, was also quoted as saying.

The decision to lend Spacey the gong was met with widespread controversy as the actor has been at the center of multiple sexual abuse allegations.

Past winners of the Stella della Mole Award include actors Isabella Rossellini and Monica Bellucci, and director Dario Argento.

Weird decision: He gave a master class while being hailed for helping to grow cinema – a decision that has proved controversial in the country

Kevin accepted the award as the Oscar winner spoke up days after he dismissed seven other sex crime charges against a man in the early 2000s in a London court on Friday.

The Hollywood maverick told Italian news agency Ansa that he’s tried to live each day as it comes and that he’s not “living in a cave”.

He said: “I live my life every day, I go out to restaurants, I meet people, I drive, I play tennis, I’ve always met generous, genuine and compassionate people.

“I wasn’t hiding, I wasn’t living in a cave. What you see in the media is not real life, I don’t get my public life back because I never left it.

Allegations against the Hollywood star include sexual touching, touching over clothing and forcing the complainant’s hand against his private parts over clothing.

Spacey was arraigned at Southwark Crown Court on Friday after previously denying five allegations involving three other men, who are now in their 30s and 40s.

The new charges include three counts of indecent assault, three counts of sexual assault and one count of inducing an individual to engage in sexual activity without consent on unspecified dates between 2001 and 2005.

Spacey, who appeared at Southwark Crown Court in London via video link, confirmed his identity and pleaded not guilty to all seven charges against him.

The two-time Oscar winner, known for his starring roles in ‘American Beauty’, ‘The Usual Suspects’ and ‘House of Cards’, appeared at the Old Bailey in July last year to contest the five previous charges.

Dressed up and booted: Kevin wore a classic black tuxedo and red bow tie for the occasion in Turin

He pleaded not guilty to four counts of sexual assault and one count of causing a person to engage in penetrative sexual activity without consent.

The second alleged victim, a man in his 30s, claims to have been sexually assaulted by Spacey in London on August 31, 2008.

Spacey also faces a serious sex offense charge for causing a person to engage in penetrative sexual activity without the consent of the second alleged victim.

He is facing a fourth sexual assault charge in Gloucestershire in April 2013 against the third applicant, who is now in his 30s.

The actor has vowed to “prove his innocence”.

Spacey has been granted unconditional bail and will face a four-week trial on June 6 on all charges. A pre-trial review is scheduled to take place on April 5.

In October last year, the actor, who was artistic director at The Old Vic between 2004 and 2015, won a civil lawsuit in the United States alleging that he had “unwanted sexual advances” at a party in 1986.

In that lawsuit, Spacey “categorically” denied the allegations and said he “had no sexual interests or desires” at the time or since the alleged incident.

On October 20 last year, a jury found Spacey not liable, and the New York court dismissed the sexual assault lawsuit against the actor.

Speaking of which, the Hollywood outcast recently told Italian news outlet Ansa that he’s tried to live each day as it comes and that he hasn’t “gone to live in a cave.”