Kim Kardashian and Kanye West have finalized their divorce and reached an agreement over custody of their four children, parenting plans and splitting up their multi-million dollar real estate portfolio. 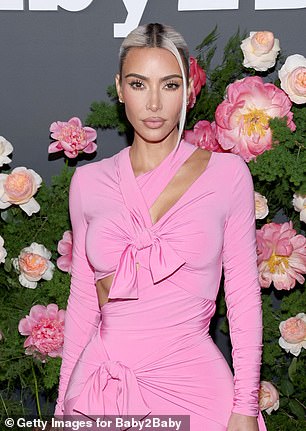 The latest: Kim Kardashian, 42, and Kanye West, 45, have finalized their divorce, with Kim receiving $200,000 a month in the agreement. She was photographed in LA earlier this month

Insiders told TMZ that Kardashian will have custody of the kids most of the time.

Under the terms of the agreement, West will be responsible for 50 percent of the education and safety expenses for the four children.

West and Kardashian agreed to participate in mediation should they have a parenting agreement, according to the outlet. In the event of non-attendance, the parent present decides on the respective topic.

The monthly payment of $200,000 must be deposited into Kim’s account on the first day of each month.

West and Kardashian – pictured at a 2020 Oscars party in LA – agreed to participate in mediation should they have a parenting agreement, according to TMZ

Split: During her high-profile legal battle, Kanye attempted to resist Kim’s efforts to be legally declared single – but a judge granted her request in March 2022. They were pictured at the Met Gala in NYC in May 2016

Both West and Kardashian waived spousal support under the terms of the prenuptial agreement they signed prior to their marriage, the outlet reported.

In the divorce settlement, West agreed to give Kardashian title to a $4.5 million home next to where Kardashian lives in Southern California, according to TMZ.

Kardashian will now be the owner of the five-bedroom home, which spans 3,650 square feet. She is expected to demolish the house – which West said he bought to be closer to his children – as it needs multiple renovations.

Sources told the outlet that over the course of the six months Kardashian has unsuccessfully attempted to reach a general divorce settlement with West, he has repeatedly refused to “take part in resolving the matter.”

“Kim’s patience was tested but she took things calmly and eventually Kanye came along,” the outlet’s source said.

According to the outlet, Kim’s attorney, Laura Wasser, was key in mediating between the parties to reach an agreement between the exes.

If they hadn’t reached an agreement, West would have had to testify in the case, and a trial would have started the next month.

Details: If they hadn’t reached an agreement, West would have had to testify in the case, and a court hearing would have started the next month. He was pictured in Paris last month

Kardashian has unsuccessfully tried to reach an agreement with West for the past six months, but he has consistently refused to participate in resolving the matter

The settlement comes less than two months after a report indicated West was preparing to agree to it.

The Blast reported on Oct. 18 that Kanye’s attorney had filed a “disclosure statement,” a sign that her case is nearing completion.

According to the documents, Kanye has turned over all of his financial information to his estranged wife’s legal department and has also reached an agreement with her on how their finances and property should be divided.

The new developments come amid Kanye’s latest worrying behavior, which has allegedly prompted Kim to distance herself from him, with the couple only communicating through assistants.

Regarding their divorce, The Blast writes, “In cases of this nature, disclosure is typically filed within days or weeks of the final judgment and settlement being filed.”

However, as the outlet noted, separating couples are able to settle everything related to their divorce, except for custody of their children, which Kanye may continue to fight over.

Kim married Kanye in Florence, Italy in 2014 and welcomed four children with him. She eventually filed to end the marriage in February 2021.

During her high-profile legal battle, Kanye tried to resist Kim’s efforts to be legally single, but a judge granted her request in March 2022.

Kanye has also gone through numerous attorneys during the split and recently hired his sixth attorney – the same attorney who represented Melinda Gates in her $130 billion divorce from ex-husband Bill Gates, Robert Stephan Cohen.

Because Cohen is in New York and Kanye’s legal separation is in Los Angeles, the rapper has also hired Beverly Hills-based attorney Nicholas A. Salick of Salick Family Law Group, APLC, to practice law in California, TMZ reports.

Things seem to have grown even chillier between the exes in recent months amid Kanye’s recent controversies, which include his “White Lives Matter” t-shirt and repeated anti-Semitic remarks.

New representation: The latest filing comes nearly a month after Kanye hired the same attorney who represented Melinda Gates in her $130 billion divorce from ex-husband Bill Gates in his own ongoing legal battle with Kim

According to Page Six, Kanye’s troubling behavior has caused Kim to distance herself from him and rely on assistants to communicate with him.

“They haven’t had any communication for several weeks and all communication regarding the children’s schedules is now being coordinated through assistants,” a source told the publication.

Insiders have told the site that Kim is disgusted by Kanye’s recent troubling behavior, which includes his interview with Tucker Carlson, WLM shirts and anti-Semitic remarks.

TMZ reported that Kim is “not taking Kanye’s calls” after he sparked controversy around the world last week by donning a black sweatshirt with the WLM slogan in it, which was in response to the Black Lives Matter movement, which formed in 2013, the fatal shooting of Trayvon Martin by George Zimmerman.

The publication claimed Kim hasn’t spoken “directly” to Kanye in weeks and is focused on her four young children, but in the past the star and her family have been on hand to help the rapper battle his sanity improved.

Sources close to Kanye say they “wish Kim was still in the picture to step in” and worry Kanye could lose “a lot of money” during this turbulent time in his life.

Professional fallout from West’s repeated statements about anti-Semitism included Adidas cutting ties with him on October 25 over his conduct.

Foot Locker and Gap also committed to removing Yeezy from their shelves, while fashion mainstays including Vogue magazine publicly distanced themselves from the rapper/fashion designer.

Talent agency CAA has removed West from their roster, while a documentary about West made by studio MRC has been shelved.

Family Matters: However, as The Blast noted, separating couples are able to work out everything from their divorce, except for custody of their children, which Kanye may continue to fight over

Last month, Kanye wore his controversial White Lives Matter shirt to his nine-year-old daughter North’s basketball game. An eyewitness told TMZ that Kim didn’t speak or look at her ex and pulled her car into the parking lot to avoid contact with him.

Kim reportedly paid for more security at her children’s private school after Kanye named the facility on social media.

According to TMZ, the school recently hired extra security as a precaution — with Kim footing the bill.

A source said officials at the school don’t believe Kanye poses a threat but are concerned someone might see his messages and show up on campus.

Their divorce was filed last year in February 2021, and the performer revealed that the TV personality is currently “growing up basically 80 percent of the time.”[s] these children.’

https://www.dailymail.co.uk/tvshowbiz/article-11483615/Kim-Kardashian-Kanye-West-SETTLE-divorce-Shell-200K-month-child-support.html?ns_mchannel=rss&ns_campaign=1490&ito=1490 Kim Kardashian and Kanye West are getting divorced: she’s getting $200,000 a month in child support