The treasury unveiled in King Tutankhamen’s tomb 100 years ago this week, including thrones, chariots and THIS death mask

By Mark Palmer for the Daily Mail

Patience is a virtue – but it must have waned at Highclere Castle in the summer of 1922 when Lord Carnarvon considered allowing Howard Carter a final season of excavation work in Egypt’s Valley of the Kings.

He had already spent £5-6million of today’s money and was disappointed that his investment showed so little return.

But he rolled again – and 100 years ago this week, he was rewarded with what is arguably the greatest archaeological discovery of all time. 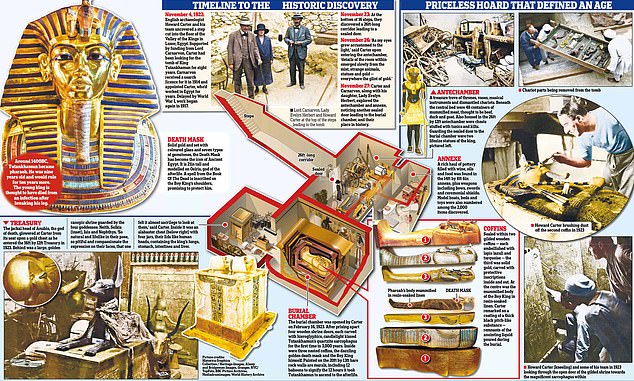 100 years ago this week, Lord Carnarvon was rewarded with a magnificent discovery – wonderful, priceless and hidden for 3,000 years, ultimately including King Tutankhamen’s sarcophagus

Carter and his team were examining a range of rocks in front of the tomb of Ramses VI when a young waterman stumbled over what turned out to be the top covered stairway.

After partially excavating the steps, they came upon a door with oval seals and hieroglyphs.

This was just the beginning of what was to come.

At this point, most of us would have unearthed – or smashed in – the door to see what it hid, but Carter faithfully yielded to his patron.

“I have finally made a wonderful discovery in Valley; a magnificent tomb with seals intact; reupholstered upon arrival; Congratulations,’ he reported in a telegram.

Lord Carnarvon and his daughter Evelyn left Highclere at once and arrived at Luxor on 23 November.

The next day, in the presence of the Carnarvons, Carter made a breakthrough in the corner of a second door deeper underground, allowing him to peer inside by candlelight.

‘Can you see anything?’ Carnarvon asked him.

Sarcophagus containing the golden coffin of Pharaoh Tutankhamen (r. 1333–1323 BC), in which his mummy was kept. From the Cairo Museum, Egypt

Wonderful, priceless, and hidden for 3,000 years, including ultimately the sarcophagus of King Tutankhamen – “the young king” who came to the throne at the age of eight or nine and ruled for a decade before prematurely declining at the age of 19 died. in 1323 BC after which he was mummified and buried in a tomb filled with artwork, jewelry, and other treasures.

The Daily Mail correspondent Arthur Weigall was present when the tomb was opened and saw Lord Carnarvon enter.

Over the next few weeks, now in the presence of eager Egyptian authorities, the full extent of the discovery was revealed: an antechamber of thrones, alabaster vases, musical instruments, and dismantled chariots; the treasury containing King Tut’s internal organs and 34 miniature statues of Tut; an outhouse used to store weapons and household goods; and the burial chamber with the king’s gold tomb.

Ultimately, more than 5,000 items were recovered – and the excavation work continues to this day.

For Lord Carnarvon – who died of an infected mosquito bite just five months later – it was a triumph after a lifelong interest in Egypt; and for Carter, a reward as an archaeologist in the country where he had worked since he was 17.

KING TUTANKHAMUN: THE PHARAOH WHO RULED EGYPT MORE THAN 3,000 YEARS AGO

The face of Tutankhamun was an Egyptian pharaoh of the 18th dynasty, reigning between 1332 BC and and 1323 B.C. That’s right, his famous golden death mask

Tutankhamun was an Egyptian pharaoh of the 18th dynasty, reigning between 1332 BC and and 1323 B.C.

He was the son of Akhenaten and ascended the throne at the age of nine or ten.

When he became king, he married his half-sister Ankhesenpaaten.

He died around the age of 18 and his cause of death is unknown.

In 1907 Lord Carnarvon George Herbert asked the English archaeologist and Egyptologist Howard Carter to oversee the excavations at the Valley of the Kings.

He spent several months cataloging the antechamber before opening the burial chamber and discovering the sarcophagus in February 1923.

When the tomb was discovered by archaeologist Howard Carter under the patronage of Lord Carnarvon in 1922, the media frenzy that followed was unprecedented.

It took Carter and his team 10 years to clear the tomb of its treasure because of the variety of items found inside.

For many, Tut embodies the glory of ancient Egypt because his tomb dates from 1569 to 1315 BC. BC was filled with the glittering wealth of the wealthy 18th dynasty.

Egypt’s antiquities chief Zahi Hawass (3rd L) oversees the removal of the lid of King Tutankhamun’s sarcophagus in his underground tomb in the famous Valley of the Kings in 2007.

https://www.dailymail.co.uk/news/article-11467277/The-treasure-trove-revealed-100-years-ago-week-King-Tuts-tomb.html?ns_mchannel=rss&ns_campaign=1490&ito=1490 King Tutankhamun: The treasury unveiled in his tomb 100 years ago this week