Chaos as a ferry with 210 passengers on board crashes into a busy pier, injuring a pregnant woman

A large ferry carrying more than 200 shocked passengers has crashed into a popular pier with a pregnant woman among the injured.

The ship Lady Cutler was attempting to dock at Yanonung Quay in Melbourne’s Docklands around 6pm on Saturday when it crashed into a concrete wall.

Dozens of police officers and paramedics rushed to the scene, where they spent at least an hour speaking and examining the large crowd.

All 210 passengers on board belonged to a local Somali community group, as witnesses recalled the “scary ordeal”.

A pregnant woman is believed to be among several injured after hitting her head and suffering concussion as a result. 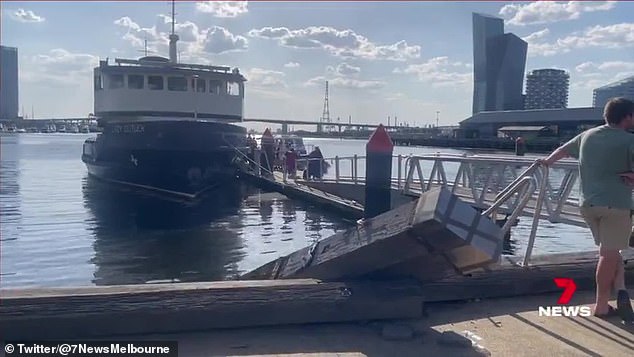 “A lot of people broke their teeth and someone was pregnant and they hurt themselves,” a shaken passenger told Nine News.

“A lot of people are just hurt.”

The busy precinct was packed with families witnessing the crash.

“We saw the boat come in pretty quickly and we see it’s about to dock and we figured there was no way he was going to save it even if he put it in reverse,” a group of young viewers told Seven News .

A shocked passenger revealed some of the 220 on board were injured, including a pregnant woman

A spokeswoman for Victoria Police said the incident was a matter for WorkSafe Victoria.

Ambulance Victoria is yet to provide details on the injured.

Formerly referred to as “VH08” before recently being renamed Yanonung Quay, it is a prominent point for locals and tourists alike when visiting the Docklands.

https://www.dailymail.co.uk/news/article-11634733/Lady-Cutler-ferry-210-passengers-board-crashes-Central-Pier-Docklands-Melbourne.html?ns_mchannel=rss&ns_campaign=1490&ito=1490 Lady Cutler ferry with 210 passengers on board crashes at Yanonung Quay in Docklands, Melbourne