Los Angeles, which prevailed in the 2022 final after beating Philadelphia Union on penalties, on Thursday confirmed its new partnership with the banking giants over naming rights to their Exposition Park stadium.

According to Forbes, BMO will pay the club $100 million over 10 years, which is the largest naming rights deal in Major League Soccer history by average annual value. 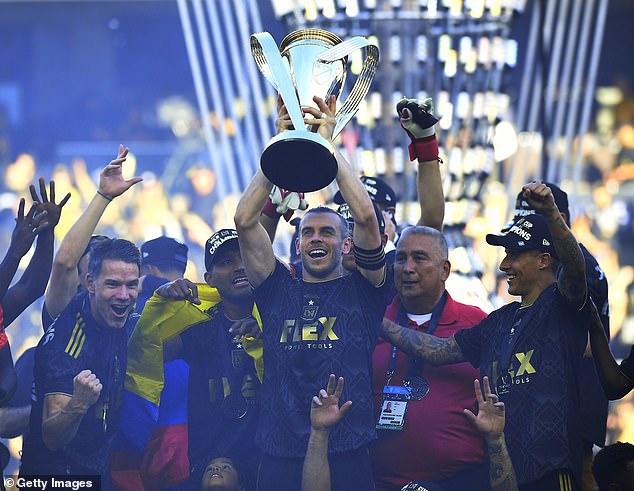 “More impressions of what we do on the pitch result in tangible added value for sponsors. Sponsors pay more for sponsorship. This leads to more income that we can reinvest in the club.”

LAFC’s new partnership with BMO, the eighth-largest bank in North America, also ends its pact with Banc of California, whose name has stood on Exposition Park since its own deal began in 2016.

The Banc of California was expected to pay them $100 million over 15 years, but four years into the contract, they agreed to a $20.1 million fee for termination, according to an SEC filing.

BMO has partnerships with a number of sports teams in the US and Canada, including the NBA’s Chicago Bulls (pictured).

BMO has now added another major sports team to its roster, sponsoring LAFC’s stadium while also partnering with the likes of the NHL’s Chicago Blackhawks, Minnesota Wild and St. Louis Blues, the NBA’s Chicago Bulls and Milwaukee Bucks, and the Toronto Argonauts and the CFL’s Montreal Alouettes.

The bank has also worked with other MLS teams in the past, including Toronto FC, CF Montreal and Vancouver Whitecaps FC.

“BMO is excited to partner with LAFC, which reaffirms our bank’s commitment to advancing the game of football throughout North America,” said Cameron Fowler, chief strategy and operations officer, BMO.

“Through BMO Stadium, we will share our passion for football and our commitment to the Los Angeles community, while bringing to life our purpose to boldly grow the good in business and in life. We look forward to supporting LAFC and its fans this season and beyond.’

The newly named BMO Stadium, which also serves as the home ground for NWSL’s Angel City FC, opened in 2018 and seats 22,000.

LAFC’s first home game after completing the nine-figure naming rights deal will be when the Portland Timbers visit on March 4th.