The Los Angeles Lakers are reportedly planning to train Meyers Leonard two years after he was suspended and required to meet with Jewish leaders for using an anti-Jewish slur during a video game live stream.

The Athletic’s Shams Charania reported that Leonard will be training Friday for the injury-plagued Lakers, who are still without All-Star Anthony Davis (foot).

The former Miami Heat center’s absence from the NBA may not necessarily be due to his use of the anti-Jewish slur. Leonard was only recently cleared to play following a series of ankle and shoulder surgeries, according to Charania.

The Lakers did not immediately respond to a request for confirmation.

SCROLL DOWN FOR VIDEO 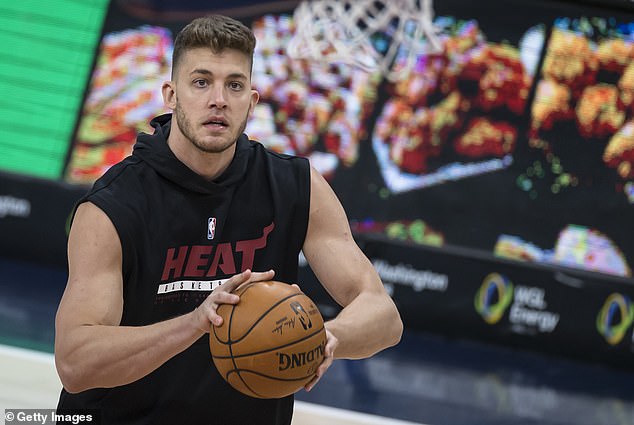 The Los Angeles Lakers are reportedly planning to coach Meyers Leonard, the former Miami Heat center who has been out of the league since he was heard using an anti-Jewish slur during a live video game stream

As for his standing in the league, Leonard is cleared to return.

‘[He] spent time with Jewish leaders and immersed himself in the Jewish community in recent years – which was well known to the League,” Charania tweeted.

Leonard has been out of the NBA since March 2021 after a video surfaced of him using an anti-Semitic slur while live-streaming a video game on website Twitch.

“Damn cowards,” Leonard, 30, is heard saying during the “Call of Duty” livestream. “Don’t fucking cut me off you fucking idiot.”

He apologized for the incident, which drew sharp criticism from the Heat, Jewish groups and NBA Commissioner Adam Silver, who fined Leonard $50,000 and barred him from being on the Heat for a week. The team had previously said that Leonard would be staying away from the team indefinitely.

Leonard, 30, was playing “Call of Duty” on website Twitch when he was caught saying “k***” – a derogatory term for a Jewish person

Leonard, who was injured at the time, was traded to the Oklahoma City Thunder in a salary dump but was not a fit for the team.

Silver said he believes Leonard is “really remorseful” for using the insult.

“Meyers Leonard’s comment was inexcusable and hurtful, and such an offensive term has no place in the NBA or in our society,” Silver said at the time.

Leonard was asked by the league to participate in a cultural diversity program. He also met with representatives of the Anti-Defamation League, a well-known Jewish organization working to stop extremism and educate about prejudice.

The Heat is owned by Israeli-American businessman Micky Arison (pictured)

Leonard released a statement after the incident, claiming he didn’t know what the word meant.

“I am deeply sorry for using an anti-Semitic slur during the live stream yesterday. Although I didn’t know what the word meant at the time, my ignorance of its history and how offensive it is to the Jewish community is absolutely no excuse and I was just plain wrong.

“I’m more aware of its importance now and am committed to finding people who can help me educate myself about this type of hate and how we can fight it. I acknowledge and own my mistake, and there is no running away from something that is so hurtful to someone else.

“This is not a fair representation of who I am and I apologize for that [Miami Heat owner Micky Arison and his family]my teammates, coaches, the front office and everyone associated with the Miami Heat organization, my family, our loyal fans and others in the Jewish community that I have hurt.

“I promise to do better and know that my future actions will be more powerful than my use of that word.”

Former New England Patriots wide receiver Julian Edelman, who is Jewish, reached out to Leonard via social media and offered to meet with him.

“I have a feeling you didn’t use that word out of hatred, but out of ignorance,” Edelman wrote. “Most likely, in your comment, you weren’t trying to offend anyone or profile Jews. That’s what makes it so destructive. When someone wants to be hateful, there is usually a lot of resistance.

“Casual ignorance is harder to fight and has a longer reach, especially when you have great influence. Hate is like a virus. Even accidentally, it can spread quickly.

Edelman (pictured) didn’t believe Leonard had any harmful intentions, but said he was showing “casual ignorance,” which was more dangerous

“I’m down in Miami quite often. Let’s have a Shabbat meal with some friends. I’ll show you a fun time.’

Leonard is not known beyond basketball fans, but he rose to national prominence during the restart of the 2019-20 NBA season in Orlando when he decided to stand up for the national anthem when his Miami teammates knelt to protest racism.

He explained his decision in August 2020, saying he could be a patriot while supporting the Black Lives Matter movement.

“Some of the conversations I’ve had over the last three days have literally been the toughest,” Leonard told The Associated Press ahead of a game in the league bubble in Orlando. “I’m with the Black Lives Matter movement and I love and support the military and my brother and the people who have fought to defend our rights in this country.”

The 7-foot-tall former University of Illinois star was drafted 11th pick in the 2012 NBA Draft from Portland, where he played most of his career.

Leonard has earned nearly $60 million over nine NBA seasons, the last two of which have been in Miami.

https://www.dailymail.co.uk/sport/nba/article-11629859/Lakers-work-Meyers-Leonard-two-years-suspended-using-anti-Jewish-slur.html?ns_mchannel=rss&ns_campaign=1490&ito=1490 Lakers “to coach Meyers Leonard” two years after he was suspended for using an anti-Jewish slur

James Foley's mom: DOJ told the family ISIS Beatle 'George' is 'very much in federal custody in US'