Jackson, a former MVP, has not been in the lineup since the Ravens’ December 4 win over the Denver Broncos when he sustained an MCL in his right knee.

Speaking on Fox’s pregame show, Vick Jackson encouraged playing the Bengals: “It’s the playoffs. You’re three games away [from the Super Bowl]. Put a bracket on it. Here we go… I played a full season with a sprained MCL.” 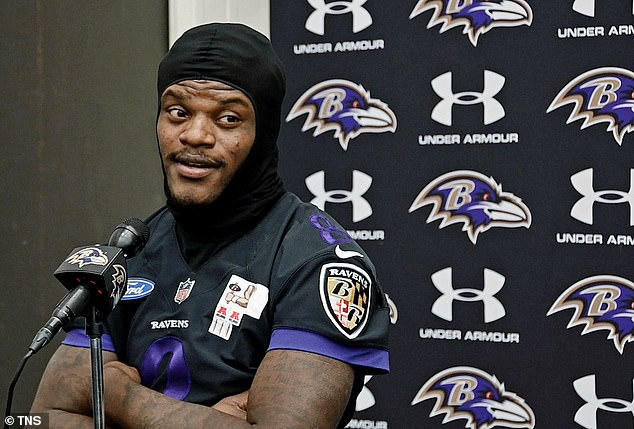 Jackson, a former MVP, has not been in the lineup since the Ravens’ December 4 win over the Denver Broncos when he sustained an MCL in his right knee. He missed Sunday’s game in Cincinnati as the Ravens suffered a season-ending loss

Co-hosts Charles Woodson and Sean Payton both cautioned Vick, saying the severity of the injury may not have been clear to the retired quarterback.

But it was another former signal caller, Griffin, who really took aim at Vick for suggesting that Jackson should risk further injury as he is close to becoming a free agent.

“That’s why you don’t just put a brace on him and play,” Griffin wrote on Twitter alongside a picture of the former Washington quarterback’s infamous knee injury in a playoff game against the Seattle Seahawks.

“Looking back is 20/20,” said Griffin, whose career never recovered from his second knee injury in 2013. “I didn’t have the luxury of it. Lamar does. He DOES THE RIGHT THING.”

The debate over Jackson’s injury — and public suspicion that he is physically fit to play in Cincinnati on Sunday — stems from his looming contract situation. Risking more injuries could put Jackson at risk of what is likely to be a nine-figure contract this offseason.

The former Heisman winner previously turned down a reported $250 million offer from the Ravens because the deal was not fully guaranteed, according to a September report from ESPN’s Adam Schefter.

Woodson, himself a former Heisman winner, seemed to suggest Jackson was shielding himself from Vick’s controversial testimony for a future contract.

“Kudos to him,” Woodson said of Jackson. ‘It’s his business. He reckons they don’t want to pay him.’

Payton, the former head coach for the New Orleans Saints, said he wouldn’t play an injured Jackson if he was in charge in Baltimore.

“He’s going to end up in the press box with a lower body injury,” Payton said. “He will not be on the field for me.”

“Thank you all for your support and concerns about my injuries,” Jackson tweeted. “I want to give you all an update while I am in the recovery process. I sustained a grade 2 PCL sprain bordering on a grade 3 strain. My knee is still inflamed and my knee remains unstable.

“I remain positive as I continue with treatments on the road to recovery. I wish I could be out there with my boys more than anything, but I can’t give 100% of myself to my boys and fans. I still hope we have another chance.

The Ravens nearly beat the Bengals without Jackson, but a late fumble on the goal line by Baltimore backup quarterback Tyler Huntley was returned by Cincinnati’s Sam Hubbard for a game-winning touchdown after 98 yards.

The Bengals are now advancing to face the Bills in the divisional round while the Ravens weigh whether or not to keep Jackson.

Jackson tweeted after the Cincinnati loss: “If you have a good thing, you don’t play with it. You take no risk of losing it. You don’t neglect it. If you have something good, pour into it. You appreciate it. Because when you take care of good, good takes care of you.”

Many of Jackson’s teammates remain strong for his return.

“You can’t let a guy like him go,” Calais Campbell said on Sunday. “There’s always a new, exciting kid that has the potential to go out and be great. But this is a “certain” and “known” business, and you know who Lamar Jackson is. I think it’s in the Ravens organization’s best interest to give him a long-term contract and make him “the guy.”

“In my mind I know he’ll be here,” he said. “He’s a competitor. He wants to win. This is his team and this is his offense. Money is not the most important thing at Lamar. He really wants to win, contrary to popular belief.”

The NFL calendar changes on March 15th. Teams are allowed to begin negotiations with free agents one day earlier, at 12 p.m. Eastern.