Lauren Goodger put on a busty show on Wednesday as she showed off her curves in a pink bikini top on Instagram.

The former TOWIE star, 35, took to her Instagram Stories to share a positive message following her alleged assault and the tragic death of her daughter Lorena.

Filming herself, she panned the camera down to show off her ample cleavage in the pink bralette, which she paired with a pair of denim shorts. 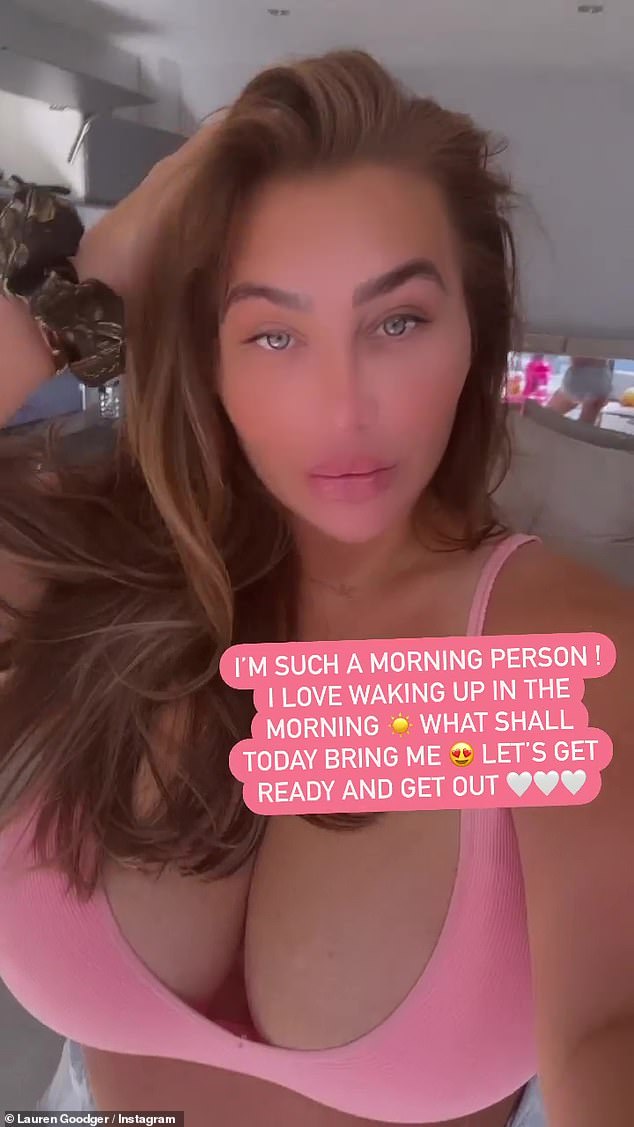 Pulse racing: Lauren Goodger put on a busty show on Wednesday as she showed off her curves in a pink bikini top on Instagram

Looking fresh, she wore a light makeup palette that emphasized her natural beauty.

Her long brunette tresses were left loose to fall past her shoulders as she prepared to start the day.

Lauren captioned the clip: “I’m such a morning person! I love waking up in the morning. What should I bring today? Let’s get ready and get out’.

Lauren tragically lost her newborn baby Lorena due to complications during her birth last month.

Moving on: The former TOWIE star, 35, took to her Instagram Stories to share a positive message following her alleged assault and the tragic death of her daughter Lorena

She was allegedly attacked on the day of her baby’s funeral. Her boyfriend Charles Drury, 25, was later arrested after the incident and released on bail.

She went through a “terrible whirlwind” dealing with the deaths of Lorena and her ex-boyfriend Jake McLean – who lost his life when his car plunged 70ft off a cliff in Turkey last month.

In her latest caption, the influencer claimed she was feeling “pretty again” on her “road to recovery,” while referencing her recent “heartbreak, pain and trauma.”

Busty Display: Filming herself, she panned the camera down to show off her luscious cleavage in the pink bralette, which she paired with a pair of denim shorts

She wrote: “My first post from me in a long time…. It’s a path of recovery and I’m embracing every bit of self-love I can.

“Thank you @cosmessex Emmie for making me feel pretty again. It’s been two years since I worked on my face. I’ve had two babies back to back and I’ve had a lot of heartache, pain and trauma, but I’m finding myself again.

“It will be some time before my body shape returns and my mind stops thinking about it, but I’m slowly on my way to having lips, nose and anti-wrinkles… #self love.”

She admitted she was “heartbroken” after the tragedy and said she will one day write a book to help others who may be going through the same thing.

‘I’m heartbroken at this terrible time of pain’: Lauren recently penned a moving post following the tragic death of her newborn daughter

“Just want to say thank you everyone for the support, I’m broken,” Lauren wrote on her Instagram Stories.

“One day I will write my second book and tell my story of everything I’ve been through when I’m old. And hopefully it can be someone’s survival guide.”

Lauren published her first book, Secrets of an Essex Girl, in 2013.

In her post, Lauren said she is “strong” and actively gets up every day and does things to help cope with her grief.

Open: The influencer admitted she was “heartbroken” after the tragedy and said she will one day write a book to help others who may be going through the same thing

“I’m strong and I’m not going to fall down, I get up and I keep going and what I’ve found is that I’m doing all the things I couldn’t do while pregnant,” she said.

“My house is immaculate and I do zero washing, it’s constantly being cleaned… I go out every day to do a job, even if it’s for me or Larose,” she said of her daughter, 12 months.

Lauren said she remains “positive,” adding that she has set a number of goals for the next year.

“I have goals in this terrible time of pain. I’ve set goals and by this time next year life will be different,” she concluded.

Health scare: Just days ago, Lauren had to take Larose to the doctors for a mysterious illness she first thought was chickenpox or foot-and-mouth disease

Cute: Lauren said Thursday that her daughter is fine after the scare and shared a sweet snap of the toddler at home in her high chair

A few days ago, Lauren was forced to take Larose to the doctors due to a mysterious illness that she initially thought was chickenpox or foot and mouth disease. But Lauren said Thursday her daughter is fine now after the scare.

Lorena was born with two knots in her umbilical cord tied around her neck, and although ten doctors fought to save her, she died shortly after birth.

On Sunday, Lauren revealed her touching tribute tattoo honoring Lorena, which was created from her late daughter’s ashes.

She said: “Every day I went through my list which is full of things I need to do for either my babies, my home, my future, my Larose and my angel baby.

“This was one on my list that I think about every day and I’m so glad it’s done.”

Cremation tattoos are created using a mixture of regular tattoo ink and a small amount of cremation ashes to make the tribute more meaningful.

The reality star filmed the inking on her wrist and revealed the tribute via Instagram – writing “For you my baby girl”.

Lauren was also allegedly assaulted on the day of her baby’s funeral. Her boyfriend Charles Drury, 25, was later arrested after the incident and released on bail.

Tribute: On Sunday, Lauren unveiled her touching tribute tattoo honoring Lorena, which was created using the ashes of her late child

She recently thanked her fans for their support during a “horrible heartbroken time.”

Lauren wrote on Instagram: “I just want to say thank you to everyone for all the love and support during this terrible hurricane in my life over the last few weeks. I read your messages, thanks!

“During that traumatic time I lost, but I also gained some values ​​during this horrible, heartbroken time…some new friends and got closer to my current ones and family.”

“It really showed me who I want in my life and I love every single one of you.”

More heartbreak: It comes as she was going through a ‘terrible hurricane’ dealing with the deaths of Lorena and her ex-boyfriend Jake McLean – who lost his life last month

Lauren continued, “I only have a few and that’s all I need and it taught me some lifelong lessons, no matter how hard it was.

“I asked Lorena when I had her home the night before her funeral: ‘Please guide me, please let my life lead the way it is meant to be and give me strength and courage.’

“And I change immediately and I trust her to walk my new path, thank you Lorena, I love you and I know you are always with me.”

“And I know you’ve cleared out and made room for what’s meant to be. I don’t know why I don’t have any answers but I have to trust the process.

Jake, 33, and Lauren dated Jake from 2012 to 2016 — and they had reportedly gotten together two years ago — but he tragically passed his life when his car crashed 70 feet from a crash on Sunday, July 3 Crashed cliff in Bodrum, Turkey.

https://www.dailymail.co.uk/tvshowbiz/article-11164137/Lauren-Goodger-sends-temperatures-soaring-parades-ample-cleavage-pink-bikini-top.html?ns_mchannel=rss&ns_campaign=1490&ito=1490 Lauren Goodger causes the temperatures to soar as she flaunts her luscious cleavage in a pink bikini top

Apex Legends Leak reveals how the gift system could work