Referee Sam Purkiss is set down on a stretcher after being hit in the head with a clearance during Swindon’s League Two clash with Grimsby – leaving the official left in the hospital room “dazed and dazed”.

Referee Sam Purkiss had to be put on a stretcher during Swindon’s win over Grimsby in League Two.

Purkiss was hit in the head by a ball in the eleventh minute of play at the County Ground.

The referee received treatment on the pitch before being carried off the field in the 17th minute. 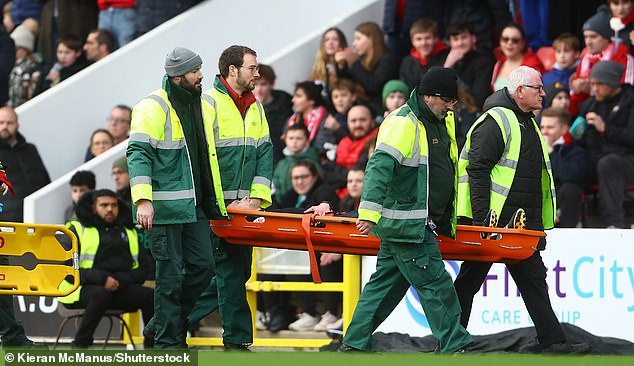 The players urged Purkiss to seek medical attention after the incident

According to The Athletic, Purkiss was left dazed and dazed in the hospital room after the incident, but was sitting up and talking.

Fourth Official Gareth Viccars took over from Purkiss of the game.

Viccars sent off Grimsby’s Danny Amos in the 34th minute.

Purkiss was mentored, with fourth official Gareth Viccars later taking over as referee

Purkiss was left dazed and dazed in the hospital room, but sat up and talked

Swindon took the lead through Charlie Austin in the 25th minute, and Marcel Lavinier made it 2-0 after the break.

Jonathan Williams, Ronan Darcy and Saido Khan also made it into the scorer list.

Swindon are sixth in the second tier, Grimsby 16th.

https://www.dailymail.co.uk/sport/football/article-11636177/League-Two-Referee-Sam-Purkiss-stretchered-hit-head-clearance.html?ns_mchannel=rss&ns_campaign=1490&ito=1490 League Two umpire Sam Purkiss stretched out after being hit in the head with a clearance

Mom reveals her horror at caring for daughter with extreme eczema