They need to follow up on this over the weekend or it’s another false dawn for Leeds United. It certainly took Jesse Marsch, victory inspired by the scintillating Willy Gnonto, to bolster claims that they are turning a corner.

Cardiff City, who sacked Mark Hudson at the weekend amid a similarly miserable run, were very friendly opponents – much friendlier than during the dramatic draw in Wales earlier this month.

Marsch will hope to see that repetition as a blessing over time, on the night Leeds have found themselves again after just two wins in 17. That will be clearer when Brentford comes here on Sunday. Two points off the bottom three is a lot more important than getting a draw against Accrington or Boreham Wood in the fourth round. 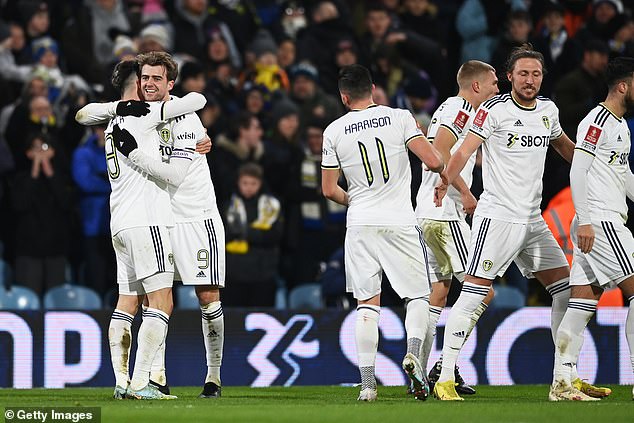 “This is an important moment for the momentum,” said Marsch. “I’ve taken a lot of criticism, some rightly so, but I feel like we’re going in the right direction. It creates trust. it comes together

“We can have a strategy to be quite explosive. I know it’s hard for people to be patient and I get the spotlight. I want us to believe in this team. We are not finished yet.’

Last night was all about admiring the naïve brilliance of Gnonto, the 19-year-old who breathes life into the club. And revel in Patrick Bamford’s continued return to fitness with a double off the bench.

Gnonto first. Such a goal is often best described by the reaction of the viewers. Not necessarily when it goes online, but after it’s played on the big screen.

Elland Road knew what had just happened but still took a sharp breath as Rodrigo, intelligently falling from the front, was shown slicing a pass just over the back of Cardiff right-back Tom Sang.

Gnonto in the box somehow had his body twisted 45 degrees when the cross fell over Sang, but went wrong-footed. It fitted on the left, he went on the right. And then the new darling of those parts 23 years ago for West Ham against Wimbledon executed a volley that had all the hallmarks of Paolo Di Canios.

In fact, it was pretty much a copy. Beauty floating in the air, poor Jak Alnwick beckoning her in. As it flashed onscreen, the involuntary screech of Elland Road pretty much spoke of the boldness of the punch that also possessed Di Canio’s purity. And yes, the home fans briefly sang the song with the original lyrics. “I remember Di Canio’s goal, I think his was better,” said Gnonto modestly.

So Leeds were up within 29 seconds and Georginio Rutter was suitably impressed as he sat in the box. Rutter, the £35.5million conqueror from Hoffenheim, had happily snapped selfies with fans before receiving a standing ovation as he was paraded onto the pitch.

Gnonto bundled Sam Greenwood’s cross in the six-yard box but Leeds were never in danger of giving up their lead. That doubled 11 minutes before the break. Jack Harrison pulled the strings on the left and sliced ​​through Cardiff with a pass to Rodrigo. The Spain international set Alnwick down and rolled into the opposite corner.

And what Leeds needed to keep here was a relentlessness that continued to pick off Cardiff to extend the game. Harrison advanced through the middle third, passing Gnonto and hitting hard early on to catch Alnwick cold at his near post after 36 minutes.

Poor Dean Whitehead, Cardiff’s caretaker manager, could only stare into the distance. They seemed to get one back – Curtis Nelson nodded off from a corner, only VAR intervened and ruled Andy Rinomhota, who was vaguely in Illan Meslier’s line of sight, was offside.

Gnonto was later withdrawn, had time to milk the applause. Bamford also had great moments, bringing home a long through ball precisely on the side foot when the visitors got too high, then deftly poking in with no backlift. “The longer you’re out, the harder it is to come back,” Bamford said. “It was frustrating, hopefully the surgery solved my problems.”

The only problems for Marsh came in the final moments. Callum Robinson’s late consolation hardly seemed to register, although Cardiff then conceded an even later penalty for handball, also cleared by Robinson. “A difficult evening,” Whitehead said. “We made a lot of mistakes. We were punished.’