Leonardo DiCaprio fans mocked the Hollywood star on social media after correctly predicting the actor would end his relationship with Camila Morrone due to her age.

The 47-year-old Oscar winner and the 25-year-old beauty “quietly ended their relationship” earlier this summer, a source close to Leo told The Sun on Tuesday.

DiCaprio’s recent split only seems to reinforce a pattern the Once Upon a Time in Hollywood star has established of never publicly dating a woman over 25. 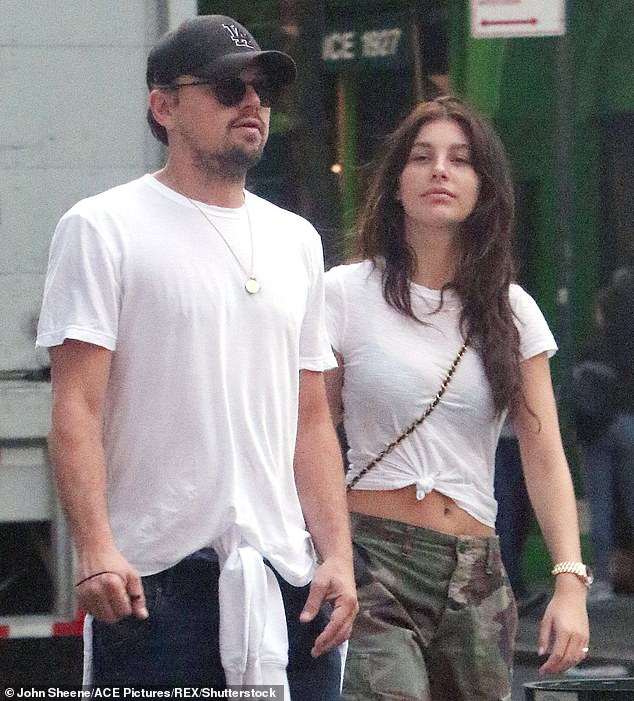 Mature? Social media users have teased Leonardo DiCaprio after predicting his split from girlfriend Camila Morrone after she turned 25

News of the split immediately set Twitter on fire as fans couldn’t believe their jokes about the couple’s doomed relationship were coming true just a month after Morrone’s birthday.

One fan tweeted: “Three things in life are certain: -death, -taxes, -Leonardo Dicaprio breaks up with his girlfriend before her prefrontal cortex is fully developed.”

Another added, “May we all be as consistent as Leonardo DiCaprio but about less scary things.”

“Leonardo DiCaprio is actually with everyone under the age of 25 that he can to help spread the word about climate change to those who will be hardest hit,” joked a third.

Predictable: Twitter users have claimed the split has reinforced a pattern the Once Upon A Time In Hollywood star has established of never publicly dating a woman in her mid-20s

Another Twitter user shared: “There is no more reliable phenomenon on this planet than Leonardo Dicaprio breaking up with his girlfriend at the age of 25. The stats are stunning.”

Others mused on how DiCaprio might have ended the romance, as one said, “I need to know how Leonardo Dicaprio manages these breakups. Does he start fights months before the age of 25 in order to be less conspicuous?

“Wake up on your birthday to a note that says ‘sorry I can’t hate myself’ please someone (sic) investigate.”

Some went on to joke about the age of the next young woman the Titanic star would be dating next, with one writing: “The girl Leonardo DiCaprio will dump when he’s 72 was born today.”

Another tweeted, “The thought of Leonardo DiCaprio possibly dating someone born in the 2000s is truly chilling.”

While others couldn’t resist just poking fun at the situation, one Twitter user joked, “Titanic turns 25 this year, at which point I’m assuming Leonardo DiCaprio doesn’t want to be a part of it anymore.”

In the playful online comment, fans continued their long-running jokes about the Titanic star’s fondness for younger women, which peaked on Morrone’s birthday on June 16.

At the time, a Twitter user shared a TikTok video of the couple with the 1986 song The Final Countdown by Europe playing over a montage of the couple.

Followers were immediately amused by the song choices, which made the clear joke that Morrone’s birthday would be the beginning of the end of her romance with the Oscar winner.

One fan commented: “Happy birthday cutie!!! It’s time for us to call it quits.’

Another remarked: “Your lease is almost up.”

Moving on to the next: Social media users then began joking about what would happen in DiCaprio’s next relationship

“If they make it another year it will be both his longest relationship and she will be the first 26-year-old he’s been with,” said one fan.

A fourth person added, “I have a feeling he might wait another year just so he can get rid of the media.”

Elsewhere, a user tweeted a snap of the couple and a photo of a Wikipedia page that listed Morrone’s age and birthday, before making another joke about the imminent split.

“Condolences in advance to this Queen,” they wrote.

Countdown: Twitter users began claiming that DiCaprio would be a single man again in June

As for the actor’s recent breakup, insiders close to DiCaprio have claimed that he and Morrone have recently been growing apart.

“Leo and Camila ended their relationship over the summer,” a source told The Sun. “There are no bad feelings between them. It just came to a natural conclusion.’

25 and fabulous! Morrone shared her gratitude for the online birthday wishes she received on June 16 from friends, fans and family

His longtime friend Al Pacino, who had dated Camila’s mother Lucila Solá for years, introduced himself, and Leonardo apparently remained friends with the family for years.

Morrone, who has been the object of Leo’s affections since 2017, began dating the 47-year-old Oscar winner when she was just 20 years old.

In 2019, she slammed critics of their 23-year age difference in an interview with the LA Times.

“There are so many relationships in Hollywood — and in world history — where people have big age gaps,” she said. “I just think everyone should be able to choose who to date.”

Happier times: Morrone, who has been the object of Leo’s affections since 2017, began dating the Oscar winner when she was 20

Defensive: In 2019, the model lashed out at critics of their 23-year age difference in an interview

Although they’ve attended many high-profile events, the two have always made it a point to walk the red carpet separately.

Back in March 2022, Oscars co-host Amy Schumer joked about the star’s love life during the opening monologue, saying, “Leonardo DiCaprio does so much for the planet. He’ll leave it in better shape to his friends.’

But when she explained the origin of the joke on The Howard Stern Show in April, Schumer revealed the aviator star didn’t mind ripping her.

‘He said, ‘Go on.’ They didn’t care,’ she said. “And his girlfriend Cami sucks. She’s actually the coolest slut you’ll meet.”

The Django Unchained star has famously made a habit of never dating any woman over the age of 25.

Gisele and Leonardo at the 2005 Academy Awards

Leo’s first high-profile relationship was with the Brazilian model, who was 18 when the couple met. She broke off the relationship five years later at the age of 23.

The actor’s relationship with Bar Refaeli ended after 5 years of dating – coincidentally, around the same time that the Israeli model turned 25 years old.

Ryan Reynolds’ current wife only dated Leo for a year – when she was 23.

The Victoria’s Secret Angel alum was just 22 years old when she began dating DiCaprio in 2012.

German-born model Garrn was just 21 when she and Leo split after two years of dating.

Kelly Rohrbach on the set of Baywatch

The Baywatch reboot star was 25 when she and DiCaprio dated from June to around December 2015, with the split reportedly being a joint decision

Things ended between Leo and the Danish swimsuit model after she turned 25 in 2017.

Leo and the model-turned-actress began dating just months after his split from Nina Agdal. The two were reported to be more serious than ever at the start of the coronavirus pandemic, but the two reportedly split in the summer of 2022.