Comedian Leslie Jones returned to television on Tuesday as a guest host on The Daily Show, bringing her outrageous sense of humor to the controversy over Boston’s new statue of Martin Luther King Jr.

Jones, formerly a star of Saturday Night Live and the failed Ghostbusters reboot, tackled the statue while guest-hosting the show for the week following Trevor Noah’s departure.

Many have poked fun at the statue’s appearance, with Jones taking a new angle, saying that the statue resembled oral sex.

“They’re celebrating you in Boston right now,” Jones exclaimed, referring to people who had taken part in the activity. 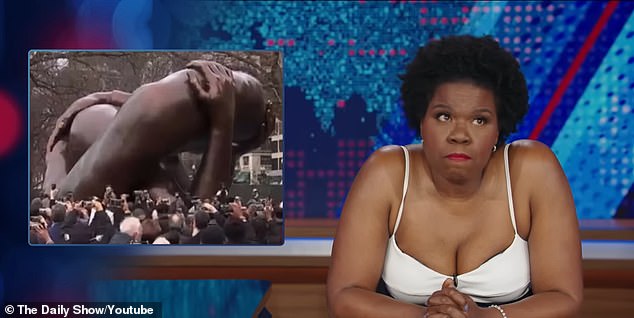 Comedian Leslie Jones returned to television on Tuesday as a guest host on The Daily Show, bringing her outrageous sense of humor to the controversy over Boston’s new statue of Martin Luther King Jr

Jones then addressed the backlash against the statue, which included people like everyone from right-wing pundits to Coretta Scott King’s cousin, saying she only speaks to black viewers as King is “our civil rights icon.”

“Okay, black people, what the hell should we do? We need to talk about this because you know if black people and the Proud Boys hate the same statue, it’s screwed up,” she said.

She then got more thoughtful and suggested the statue might age well, acknowledging that people didn’t like the Eiffel Tower when it was unveiled.

“Maybe it’s just a matter of time, over time we’ll see this statue for what it really is,” she joked.

She then returned to it with correspondent Dulcé Sloan, who said that designers never get the statue of Martin Luther King right, especially regarding the one in Washington DC, before addressing “white people”.

“That’s what the liberals need to do, make a statue of MLK in his suit on a horse.”

When Jones asked Sloan if King even had a horse, Sloan replied, “I don’t know, and neither do any of you. So put him on a horse, put him on a throne, dammit, put him in Joe Biden’s Corvette! At least we would know who it was.”

Jones then addressed the backlash against the statue, which included people like everyone from right-wing pundits to Coretta Scott King’s cousin, saying she only speaks to black viewers as King is “our civil rights icon.”

The sculpture was inspired by a hug given by Dr. King and his wife Coretta shared when he learned he had won the Nobel Peace Prize

Dulcé Sloan, who said that designers never get the statue of Martin Luther King right, specifically referring to the King’s memorial in Washington DC

The sculpture, titled The Embrace, was inspired by a photograph of the couple embracing in 1964 after learning that Dr. King Jr. was awarded the Nobel Peace Prize.

Hank Willis Thomas, the Brooklyn-based artist behind it, said he wanted to create a sculpture dedicated to love, not war, and that the image symbolized the strength of the legendary couple’s marriage. Members of the King family were there yesterday to watch the unveiling of the sculpture in Boston.

But while the idea behind the play is undeniably moving, the end result fell flat for many critics — not to mention Coretta’s cousin.

Former Guardian art critic Waldemar Januszczak said the 19-ton sculpture was a “particularly poor memorial to Martin Luther King,” while others called it “awful” and “a waste of money.”

Many questioned why the artist chose to depict the couple’s arms and shoulders but not their heads or faces, saying it was difficult to “wrap the brains around”.

“Were you really that scared to commission a full-length, lifelike likeness?” asked one critic.

‘Too bad, maybe the concept was a lot better than the execution…it just looks…terrible!’

Unfazed: The sculpture fell flat for many, who wondered why the artist removed the couple’s heads

Artists and art critics were similarly unimpressed by the sculpture

“This is a sculpture that doesn’t do well in a photograph; a single angle view does not capture it.

“Amazing idea, nice concept but hard to get your head around,” said another.

According to a New York Times interview with the artist, Embrace Boston – part of the Boston Foundation – paid for the sculpture in part.

According to the Times report, “The charity works for racial and economic justice.”

It helped deploy Resources and $10.5 million in appropriations” which includes a “maintenance fund” for the sculpture and the park in which it is located.

Artist Hank Willis Thomas at the unveiling yesterday. He said he wanted to create a sculpture dedicated to “love” and not war

Jones is the first guest presenter in The Daily Show’s post-Trevor Noah era after the South African comedian resigned in December.

Noah stunned his peers when he announced his departure from the show during a taping in front of a studio audience, according to a new report.

Noah, who has hosted the Comedy Central program for seven years, announced his intention to leave during taping for the September 29 episode, surprising audiences and the show’s staff.

In an interview with The Hollywood Reporter published Monday, showrunner Jen Flanz said she and head writer Zhubin Parang were sitting at a desk together when Noah broke the news to the camera.

“He starts talking and talking, and I look at Zhubin like, ‘What is he doing? We have to revise that,” recalls Flanz.

Flanz, who has been with the Daily Show since Craig Kilborn in the late ’90s, said that she and Parang “lost all feeling in our bodies” when they realized what was happening.

‘Did you know?’ Parang whispered to her and she replied, “Seems like I knew?”

In September, Noah broke the news to his audience that he was finishing his time on the show, telling viewers, “There’s another part of my life that I want to explore further.”

Noah explained to THR that he decided to announce his departure in front of the audience because it was the best way to let everyone in attendance know of his decision at the same time.

“And here we create the thing. [The show] Here we are together, our space, and so it felt like the most natural way for me to say it to everyone at once,” he told the outlet.

Noah said in the new interview that the stresses of producing the show during the pandemic had started to weigh on him and said he was ready for a new chapter in life.

“Maybe that’s because you didn’t grow up in America, but I think it should all end,” he said.

“A lot of American companies and American media just say, ‘Keep going as long as you can,’ but I think it’s healthy for things to end when they’re still in a good place. I want to leave before I burn out because there are many other things I would like to do,” Noah added.

Noah’s final episode with The Daily Show aired on December 8, and the comedian plans to quickly launch his next gig with a 28-city stand-up comedy tour.