Lionel Messi has shared a video of him hugging his great rival Cristiano Ronaldo ahead of what could be the last time they share a soccer pitch.

The pair put on a show in Riyadh that saw both men on the scoresheet in a game that took fans back to the heyday of their legendary rivalry during the El Clasico games between Real Madrid and Barcelona. 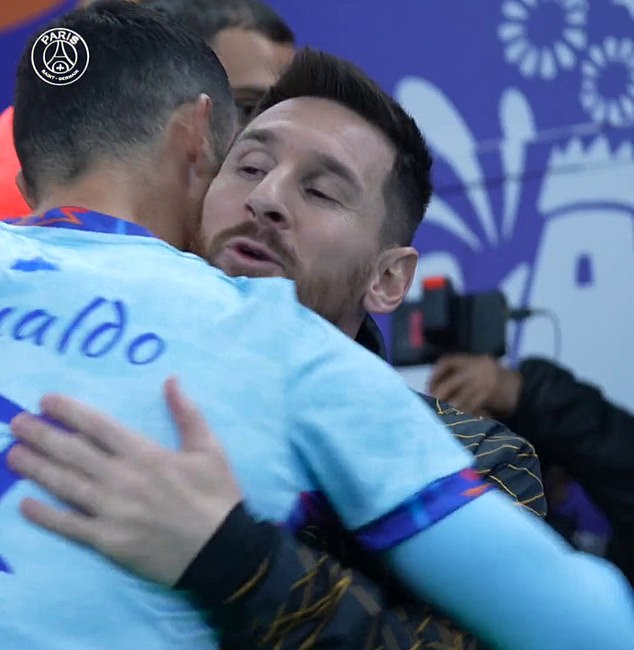 After dominating the footballing landscape for over a decade, the pair are now entering the final years of their incredible careers and the long-time rivals seemed extremely happy to share the spot together for what is likely to be their last time.

After the game, Messi shared an Instagram story with his 421 million followers, showing the couple shaking hands and hugging before the game begins.

It came after Ronaldo also took to social media, where he shared a picture of the pair to his 537million followers, captioning it: ‘So happy to be back on the pitch and archway!! And nice to see some old friends.’

Their careers have long been intertwined, with debates spanning more than a decade as to which of the two is the greatest of their generation, or even of all time.

They have shared 12 Ballon d’Ors together (Messi with seven and Ronaldo with five) and have been at odds for a long time in LaLiga when Real Madrid signed the Portuguese great in 2009.

After years of sharing records and trophies between their clubs, their rivalry began to slow down in 2018 when Ronaldo left Madrid for Juventus.

The pair are now heading in separate directions with Messi, who recently won the World Cup with Argentina, still playing his football at the highest level with Paris Saint-Germain.

While Ronaldo, two years older than Messi, has now dropped out of European football and moved to Saudi Arabia following his turbulent end at Manchester United.

The pair are unlikely to play each other unless Messi decides to step away from European football in the future and join the same league as Ronaldo, or the pair decide to continue their international career long enough for Portugal to face Argentina can.

Ronaldo, who inked a record-breaking £173m-a-year deal with Al-Nassr, was impressed as he took his Man of the Match and scored twice.

In the 11th minute, Ronaldo snagged the ball on the halfway line and deftly delivered a nutmeg to Carlos Soler, prompting a roar from the Saudi supporters.

Throughout their careers, they have dominated the football landscape because of their performances

He then scored with a smart finish from the penalty spot in the 34th minute, equalizing Messi’s penalty in the third minute and giving the new kingdom a taste of what the Saudi Pro League is in store for.

The Portuguese superstar was awarded the penalty as he rose above the defenders and was accidentally punched in the face by former Real Madrid team-mate Keylor Navas.

The veteran scored again in injury time at the end of the first half before making room in the second half.

https://www.dailymail.co.uk/sport/football/article-11657193/Lionel-Messi-shares-video-Cristiano-Ronaldo-ahead-potential-final-reunion-pitch.html?ns_mchannel=rss&ns_campaign=1490&ito=1490 Lionel Messi shares a video with Cristiano Ronaldo ahead of a possible final on-pitch reunion

No one was Spared! William and Kate see popularity plunge - with Harry and Meghan also down