Lisa Marie Presley was locked in a bitter custody battle with her ex-husband Michael Lockwood for years after she falsely accused him of having hundreds of child pornography images and videos on his computer.

Presley and Lockwood, a session musician, were married for ten years between 2006 and 2016. In 2008, Presley gave birth to twin girls, Harper and Finley, who are now 14 years old. Despite splitting in 2016, the couple’s divorce was not finalized until 2021.

Presley died Jan. 12 at the age of 54 after suffering “complete cardiac arrest” at her home in Calabasas.

In a statement from his attorney Joseph Yanny on his ex-wife’s death, Lockwood said: “Michael had hoped for a speedy and full recovery because their children needed it. It’s very sad that it didn’t happen that way.”

“Michael’s world has been turned upside down. He’s with his two daughters now,” Yanny added. Presley and Lockwood were believed to have had a 60-40 split, with Presley paying the guitarist just $4,000 in child support.

In 2017, shortly after the couple announced their split, Presley claimed she found a plethora of objectionable images and videos of children on Lockwood’s computer. The allegations were investigated and no charges were brought. 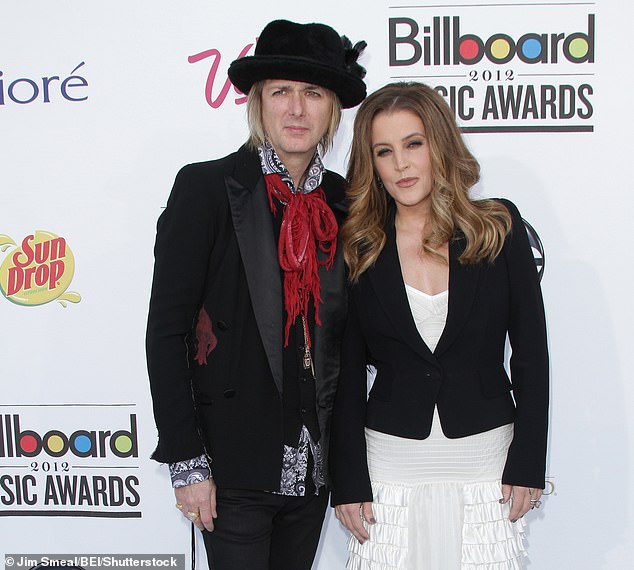 Presley and Lockwood, a session musician, were married for ten years between 2006 and 2016. In 2008, Presley gave birth to twin girls Harper and Finley

Harper and Finley photographed together at the handprint ceremony honoring their grandmother, Priscilla, in June 2022

Following Presley’s allegations that her estranged husband kept a stash of disturbing photos and videos of children on his computer at their Tennessee home, their then eight-year-old twins were placed in protective custody.

This was later found to be false and it was revealed that after their parents split up they lived with Priscilla Presley, her grandmother.

The heiress said in a court filing at the time: “I was shocked and horrified and had a stomach ache.”

Presley – Elvis Presley’s only child – told the newspapers that Beverly Hills police found 80 of Lockwood’s devices during a raid on her home. She added the police still have them and they haven’t been fully analyzed yet.

“To my knowledge, Tennessee law enforcement is also conducting an investigation related to the photos and videos I discovered,” she said, according to the documents.

“I have no idea what else might be on these devices and I am concerned that there will be more and worse images and evidence on these unanalyzed devices.

The documents also reveal pending allegations of sexual abuse and neglect by Lockwood.

The papers state: “While the defendant [Lockwood] The fact that he has not yet been convicted of crimes related to his possession of these photos, that he possessed them is documented evidence of behavior that disrupted the petitioner’s mental or emotional calm and, as in the Schu case, domestic violence “after a reasonable definition of the term.”‘

Presley died Jan. 12 at the age of 54 after suffering “complete cardiac arrest” at her home in Calabasas

Criminal charges have never been filed in connection with Presley’s allegations.

The Tennessee Bureau of Investigation investigated the issue but did not find the actions criminal.

The agency’s Public Information Officer said at the time: “Barring new potential evidence or information, we have concluded our involvement in this matter. We have found no crime committed in Tennessee and accordingly have no open investigation.’

While Lockwood’s attorney said Presley’s statements were “inaccurate and one-sided.”

Attorney Jeff Sturman continued, “Mr. Lockwood will not release very negative information about Ms. Presley to retaliate. Therefore, while Mr. Lockwood denies the truth of what Ms. Presley put in the press.’

Presley and Lockwood collaborated musically for free, although he later claimed she got him to work for free

According to Radar Online, the couple’s legal disputes appear to have been settled last October, when they settled longstanding child support issues.

Lockwood had demanded payment from Presley. The couple had a prenuptial agreement during their marriage that prevented Lockwood from seeking financial support from his former wife.

The guitarist claimed his ex-wife’s financial situation is better than first reported thanks to money raised from her father’s estate and the financial success of the Baz Lurhmann film Elvis.

He continued to portray himself as a starving artist, saying that while he was married to Presley, she forced him to approach paid music gigs to play music with her for free.

The final settlement was not published. During a previous custody hearing, Lockwood asked Presley for $40,000 a month. At this point, Presley also filed for full custody of the couple’s children.

Days after the settlement in October, Lockwood remarried when he tied the knot with Beauty Beach Lounge’s hairstylist Stephanie Hobgood.

The blonde bride wore a long-sleeved, plunging Pronovias wedding dress and clutched a bouquet of yellow roses as her father walked her down the aisle.

Fine art photographer Stephen Linsley officiated the wedding for the couple, who got engaged in December 2018 after a year of dating.

“It’s been said before that it’s hard to put into words what love can mean to a human being. What effect does it have if it is given or withdrawn?’ Michael mused on Instagram.

“I offer this picture of Stephanie and I as a snapshot of what love can bring. These are the smiles of two people watching the sunrise and sunset after five years of being together. my heart is whole We shared love and laughter yesterday with our friends and family who have supported and nurtured us and continue to support us. Love wins.’