The daughter and only child of rock and roll legend Elvis Presley had a love life befitting the genre her father helped found.

Lisa Marie Presley, a musician herself, first married rock ‘n’ roll guitarist Danny Keough, whom she met as a teenager when they were both admitted to a drug rehabilitation center.

The couple were married for six years and had two children together, but Presley shrugged off Keough with a quick divorce in the Dominican Republic before eloping with the King of Pop, Michael Jackson, in 1994.

Their marriage — marred by Jackson’s child molestation charges, jet set trips around the world and a very awkward kiss on stage — lasted just a year and a half before their paths parted.

After Jackson, Presley was engaged to musician John Oszajca in 2000, but dumped him after meeting actor Nicholas Cage at a party. She and Cage married in August 2002, only to file for divorce three months later. 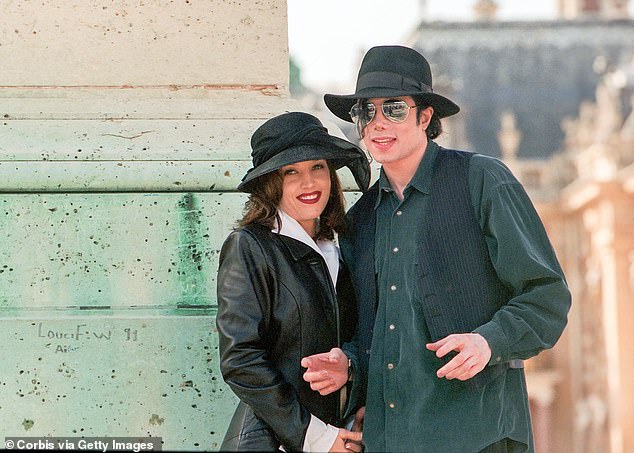 Presley then settled down with another musician, guitarist Michael Lockwood. They married in 2006 and had twins together, but divorced 10 years later after Presley claimed she found hundreds of child pornography images on his computer. Lockwood has denied the allegation.

After dropping out of high school in her junior year, Presley developed a substance abuse problem and was sent to the Scientology Celebrity Center for drug rehabilitation.

There she met Keough, a rock ‘n’ roller like her father, and the two were married in October 1988.

They had two children together – Song Benjamin and daughter Danielle Riley. Benjamin died by suicide in July 2020.

Although Presley and Keough divorced in 1994, the two remained close throughout their lives.

“I don’t know how, but we’ve managed to stay close,” she said of their relationship in 2008, according to the Star Tribune. “There are others that I associate pain or betrayal with that I have nothing to do with.” will have to do. But he and I had something special. Necessarily.’

He played guitar on some of their records and even lived in a house on their property. It was Keough who found her unresponsive on January 12 and called 9/11 before her death.

Lisa Marie Presley and Danny Keough. The two had two children together and remained close after the divorce

Lisa Marie Presley and her first husband Danny Keough. They married in 1989

In 1992, Presley was reintroduced to Michael Jackson, whom she had met in the 1970s when she was just seven years old.

The two struck up a friendship, calling each other frequently on the phone and chatting for hours.

That friendship turned romantic in 1993 when Jackson was accused of molesting 13-year-old Jordan Chandler. Presley became the embattled pop star’s support system during this time, and he eventually proposed to her during one of her calls.

The couple flew to the Dominican Republic in May 1994 to escape the press and eloped in a small, private ceremony.

Their marriage was plagued by theories that they only married to deflect allegations against Jackson of not having sex together and speculation as to when they would inevitably divorce.

Both struggled to stay ahead of the conversation, going so far as to be awkward on stage when they opened the 1994 MTV Video Music Awards.

“Welcome to the MTV Video Music Awards,” Jackson said as he and Presley walked onto the stage hand in hand. “I am very happy to be here. Just think, no one thought this would last.’

And in a 1995 interview with Diane Sawyer, Presley tried to face the asexual rumors head-on.

‘Are we having sex?’ Presley asked, then she and Jackson shouted together, “Yes! Yes! Yes!’ They added that they intended to have children together.

As if to emphasize their sexual attitude, Jackson released the music video for You Are Not Alone a month later, in which he and Presley were making out in a desert temple, soaking wet and naked.

Lisa Marie Presley and John Oszajca in Los Angeles in 1999

After struggling for several years to overcome her divorce from Jackson, she met and became engaged to musician John Oszajca in 2000.

But after meeting Nicolas Cage at a party, she broke off her engagement to Oszajca and started dating the actor.

Cage said he was “thunderstruck” when she met Presley at the party, and their whirlwind relationship was marked by highs followed by tumultuous fights, along with rumors that Cage intended to buy Elvis’ Graceland mansion.

Presley described the relationship as a “wild ride” in a 2003 interview with Rolling Stone.

“You can’t throw a tantrum and then call me four days later and expect everything to be okay… so it was… We were both basically like two 12-year-olds in a sandbox.”

“We’re both so dramatic and dynamic that when it was good it was incredibly good and when it was bad it was just a bloody nightmare for everyone.”

Despite the famously short marriage, it would be almost two years before they finalized their divorce.

In 2006, Presley married her music producer Michael Lockwood, who had also worked extensively with musicians such as Carly Simon and Aimee Mann.

Shortly after the wedding, they had twins together – Finley Aaron Love and Harper Vivienne Ann – and stayed together for ten years.

The dissolution of their marriage was anything but friendly. As the couple fought for custody of their children, Presley said she found hundreds of explicit photos of children on his computer.

‘When I saw the photos [Lockwood’s] computer and watched the videos, I was shocked and horrified and had nausea in my stomach,” Presley wrote in a court filing demanding custody of the children. “I hadn’t guessed that [he] took these photos. Out of respect for my family’s privacy, I will refrain from describing the photos in detail.’

The police investigated the allegations, but later rejected them, citing a lack of evidence.

“Barring new potential evidence or information, we have closed our involvement in this matter,” the Tennessee Bureau of Investigation said. “We found no crime in Tennessee.”

Lisa Marie Presley and Michael Lockwood at the Palladium in Hollywood, 2005

When the couple challenged it, Lockwood returned fire by demanding custody of the children and fearing Presley would lapse back into substance abuse after the death of their son Benjamin.

Presley had long tried to keep her addiction issues under wraps, but court documents from the divorce threw it all out.

In a 2017 statement obtained by Radar Online, she admitted to abusing cocaine, opioids, painkillers and alcohol.

“In the last three years … I’ve had to go to rehab several times,” she said, later putting the exact number at between three and five wards at a Mexican treatment facility.

Presley said her addiction peaked when her marriage ended in 2016.

“During the last year of our marriage, I abused cocaine terribly,” she said, according to court records.

When asked if her drug use was heavy, she said, “It was bad, yes.”

She added, “I’ve only been mixing the pills and alcohol for the past two years.”