Liverpool and Arsenal will be in contention for Norwegian striker Andreas Schjelderup, who is being dubbed the next Erling Haaland.

The 18-year-old reportedly caught the attention of the Premier League giants by scoring five goals in ten games for Nordsjaelland this season.

Liverpool and Arsenal would also likely face competition from Sevilla, Borussia Dortmund, Inter Milan and Juventus for the Norway Under-21 international, with Europe’s top clubs stunned by his talent. 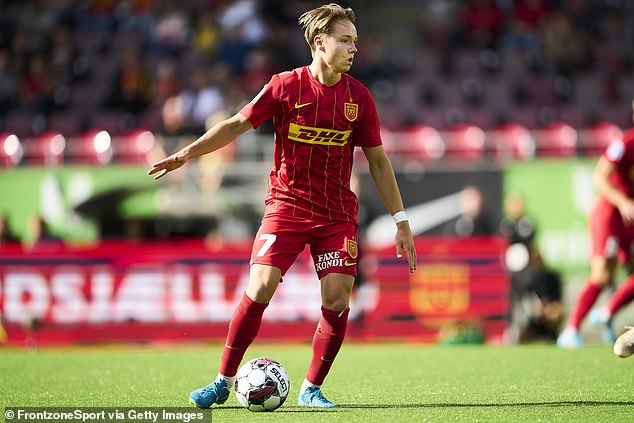 Liverpool and Arsenal will battle for Norwegian striker Andreas Schjelderup

According to Calciomercato, both Liverpool and Arsenal are interested in the striker, who is valued at around £17.5m by Nordsjaelland.

It is believed Nordsjaelland will stick to their asking price as they have already rejected a heavily discounted £3.5million bid from Sevilla.

Schjelderup’s contract currently expires in 2024. Therefore, he could leave the club in the summer of next year.

Moreover, Nordsjaelland could look to concede the striker sooner rather than later in order not to lose him on a free transfer when his contract expires.

Arsenal would likely be seen as an attractive option for Schjelderup. Mikel Arteta is known for developing young players and a move to north London could see him join forces with compatriot Martin Odegaard.

However, Liverpool will be keen to secure his services as they seek to strengthen their squad to return to the top of the Premier League.