Liverpool’s struggles this year could be a ‘dip’ – similar to what Man United have been through at times with Sir Alex Ferguson, claims Gary Neville… as he urges the ‘incredible’ Jurgen Klopp to reverse the Reds’ form

Gary Neville has compared Liverpool’s slump in form to situations he went through during his Manchester United playing career.

Jurgen Klopp’s problems only grew worse as his side were beaten 3-0 by Brighton on Saturday afternoon, with Solly March and Danny Welbeck combining for the Seagulls.

The result leaves the Merseyside club in ninth place – just in the top half of the table – and after the game Neville was quick to assess their struggling form. 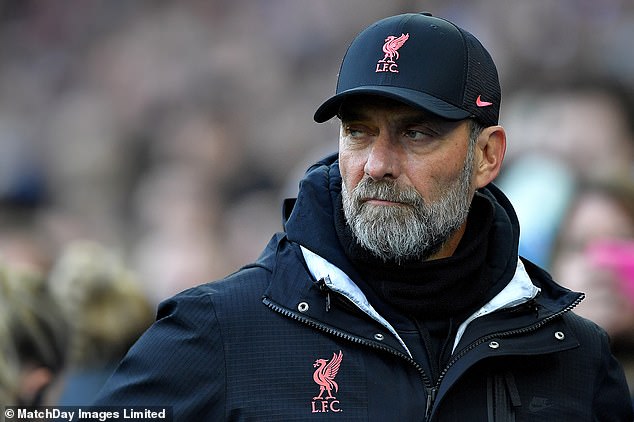 After the game, Gary Neville claimed Klopp needed to ‘regroup’ his Liverpool players

Speaking on the Gary Neville Podcast, Neville was asked if he thought Klopp had asked “too much effort” from his aging Liverpool side. Neville said, “I don’t know about that.

“Manchester United, I was there for 20 years under a manager who demanded that effort every day and there was a group of players who were there for 10 or 15 years.

“Yes, there’s been a season or two of slumps – and that could be this – but it’s crass to watch at times because you’re watching them and they’re a mess in the back, they’re everywhere. You look like you could score against them with any attack.”

Klopp’s side are without a win in three games. Before losing at Amex, Liverpool lost 3-1 to Brentford and drew 1-1 to Wolves in the FA Cup.

The result left the Reds in ninth place in the table. By comparison, Neville – under the guise of Sir Alex Ferguson – finished outside the top two spots in the league just three times in 21 seasons in the top flight.

Neville went on to suggest Klopp should be in charge at Anfield and backed the “incredible” manager to change Liverpool’s fortunes this season.

“They need to regroup, I think Jurgen Klopp will regroup. He’s not the type to back down, Jurgen Klopp, he’s a tremendous character,” Neville explained.

“I think he’s given an incredible leadership performance in those five, six, seven years, just as or better than Pep Guardiola, I really do.

“And they have new owners. They spent money but you can imagine if Jurgen Klopp gets the money that Chelsea gave their manager [he would use it well].

“If Jurgen Klopp can get that money – that £200m-250m – from new owners, and if he spends it as wisely as he has over the last six or seven years, then next season he will be empowered to go and convert this team.’

The former United defender concluded by assuring Klopp’s abilities, claiming it presents an opportunity for a ‘fresh start’ for the German.

“I don’t see that he thinks this will be the end, I think he will see this as a new beginning.

“I think because of the credit he’s built up you’re not going to put the boot on Jurgen Klopp and the Liverpool players.

“Yes you will criticize them, they defend really badly, they are too easy to play, they are bad in midfield.”

https://www.dailymail.co.uk/sport/football/article-11640805/Liverpools-struggles-year-just-dip-claims-Gary-Neville.html?ns_mchannel=rss&ns_campaign=1490&ito=1490 Liverpool’s struggles this year could just be a ‘dip’, claims Gary Neville