By Daniel Harper For Mailonline

Many people living in and around Stockholm have felt a strange rumble, with seismologists adamantly denying it was an earthquake.

According to the Swedish National Seismological Network (SNSN), nothing was detected that would indicate an earthquake.

“We can definitely rule out that it was an earthquake,” says Peter Schmidt, seismologist at SNSN 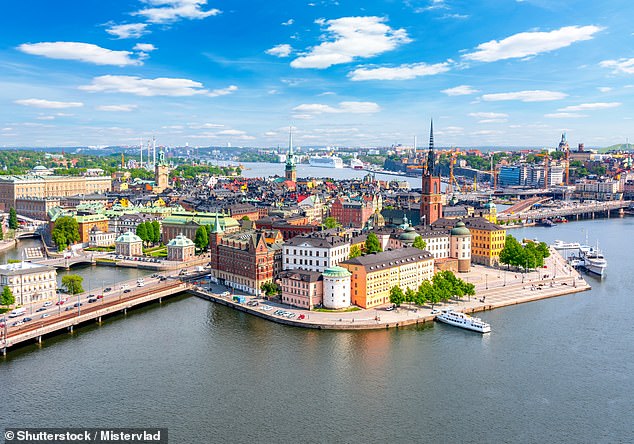 The strange earthquake-like tremors in Stockholm have left many, including experts, confused as to what might be causing them

Louise Levin, chief of communications for the Swedish Air Force, joked: “You can call Saab (the Swedish aerospace company) about this.”

The Air Force has actually conducted tests in the area that may be responsible. “I can’t say for sure there was noise, but it sounds like it,” says Air Force Press Manager Mattias Rådström

Locals tweeted about the mysterious shaking in the Swedish city: “If it wasn’t an earthquake, then what was it? It shook violently,” wrote a local resident.

Another commenter asked, “Is it an earthquake out here?”.

In a local Facebook group there were more comments about the quake: “It hit like a thunderbolt and then it trembled.” said a resident of an island outside of Stockholm.

“The house shook badly about an hour ago. At first I thought it was the building… but this was something different, much stronger,” said another.

The Stockholm County Emergency Rescue Service suspects that the vibrations are caused by road construction, “but we don’t know,” comments Henrik Jynnersjö from the emergency rescue service.

According to the Swedish Transport Authority, they are not aware of any major works in the area.

Although there are earthquakes in Sweden every day, they are usually too small to be felt by anyone except advanced seismic technology

Sweden experiences earthquakes every day, but only at minimal levels, so minimal that they can often only be detected with seismic-sensitive equipment. This is not to say that the country has never felt a stronger earthquake.

“We can get earthquakes up to a magnitude of six on the Richter scale. Five point four is the strongest that we’re absolutely sure about. This happened in 1904 near the Koster Islands off the west coast. It was so big that it shook all of southern and central Sweden, Norway and all of Denmark. And it should even be felt as far as Saint Petersburg,” says Björn Lund, head of the SNSN.

According to a website that tracks seismic activity, Sweden’s last confirmed earthquake occurred on January 19 in a district northeast of Stockholm, measuring 1.1 on the Richter scale.

However, there are some unusual anomalies where earthquake pockets appear that appear to be shifted geographically by the shifting effect of tectonic plate movement.

“Over the past 20 years, we’ve observed a cluster of seismic sites that aren’t behaving quite as we thought they would. We don’t know why they are there,” Lund explains in a short film released by SNSN.