Roger Williams, chairman of Texas-based Small Business, confirmed Santos’ appointment to the panel, and two members of the GOP steering committee said the New York congressman will also sit on the space and technology committee.

When asked if Santos would distract his committee, Williams replied, “It’s just going to be a distraction for those who want to distract.”

The newly appointed congressman is already facing multiple scandals and investigations from federal, state, and local prosecutors over his personal and campaign finances and lies about his resume and family heritage. 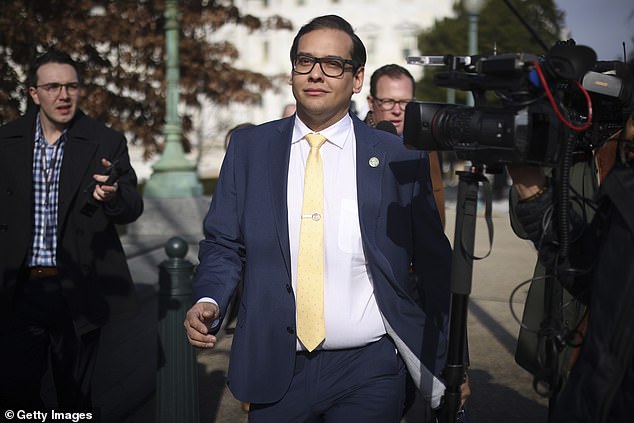 Rep. George Santos (R-NY) has been given a seat on two House committees, despite peers and constituents demanding he resign over misrepresentation

“I’m here to show my support for the concerned citizens of NY-03 who have been systematically deceived and betrayed by their own congressman,” Torres said.

the The Bronx congressman said he was sending a letter to the FEC to launch an investigation into what he called the “network of incestuous relationships” between Santos’ campaign, his company and the Redstone Strategies group. According to the New York Times, the fundraising group has no record of the group’s donors or expenses.

Rep. Ritchie Torres (D-NY) is demanding not only that Santos resign immediately, but that the Ethics Committee and FEC investigate allegations of fraud and misuse of election funds

Swarmed daily by reporters in the Capitol, the congressman has flatly dismissed the growing call for his resignation, saying, “I won’t.”

McCarthy continues to stand by the beleaguered congressman and says his constituents made their choice.

“The voters have decided. He has a right of service,” said House Speaker Kevin McCarthy. “If it turns out he did something wrong, we’ll deal with that later.”

The Democrats have been scathing in their criticism.

“Kevin McCarthy belongs to George Santos, lock and barrel,” said Rep. Pete Aguilar of California, chair of the House Democratic Caucus. “It’s the only reason he sat here to give George Santos the opportunity to vote for Kevin McCarthy. So let’s call it exactly what it is. There should be an impact,” he told ABC News.

The next steps of the ethics committee are unclear. As part of the new house rules package, every citizen can now lodge a complaint against the legislator. Ethics advocates have warned that other new rules will weaken the committee’s staff and membership.

The committee has not yet fully formed as House Republicans are in the process of selecting committee chairs and members and setting up the new Congress.

Idaho suspect Bryan Kohberger repeatedly messaged the victim on INSTAGRAM prior to the murders.