The abbot of a Buddhist temple in Louisiana is embroiled in a civil lawsuit after temple members accused him of impregnating a nun and then sending her back to Vietnam when a local abortion clinic refused because the pregnancy was too advanced.

Some members of the Tam Bao Temple in Baton Rouge alleged that Abbot Quyen Van Ho – whose religious name is Thich Dao Quang – repeatedly recruited Buddhist nuns from Vietnam and then had inappropriate sexual relations with them.

The lawsuit said Ho had caused irreparable harm to the temple by “violating his vows of Buddhism, including his vow of celibacy,” and called for his removal from the temple.

‘Quyen Van Ho’s immoral actions caused all monks, nuns and novices (except Quyen Van Ho himself and one other monk) to leave Tam Bao Temple. As a result, membership has declined and therefore the opportunity for fundraising through Temple members has declined,” the lawsuit reads, according to The Advocate.

Ho denied all the allegations against him, and his attorney Yigal Bander called them “slanderous lies” and argued they don’t even belong in court.

“The courts are not there to decide who is a good pastor, whether a pastor should be hired or fired, whether or not a pastor is honoring his faith,” Bander said.

It’s unclear whether the court will rule on the lawsuit, as it falls under the line of First Amendment protections that prohibit the government from interfering with the freedom to practice religion.

Meanwhile, the court has ordered both sides to negotiate and hold a leadership election inside the temple, which could result in Ho’s removal. 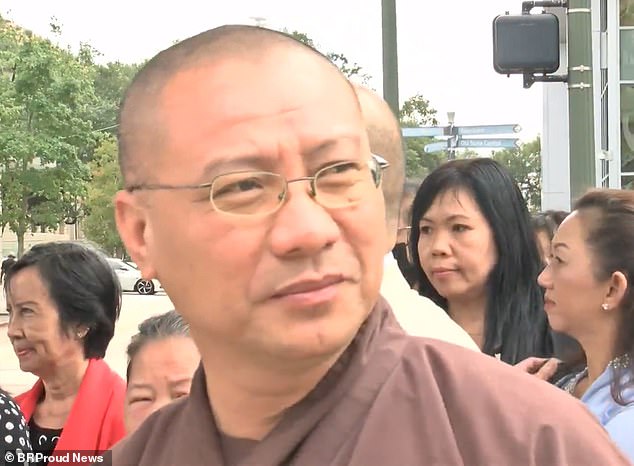 Abbot Quyen Van Ho, head of Tam Bao Temple in Baton Rouge, has been accused of recruiting Buddhist nuns from Vietnam and then having sex with them

Ho has headed Tam Bao Temple since 2003, and plaintiffs allege his behavior continued for years before the lawsuit was first filed in April.

Plaintiffs Phuong Le, Lan Tran, Lien Ta and Elizabeth Le said they first confronted Ho about the allegations in 2020, but their efforts to remove him went nowhere.

“We have tried so many avenues to offer him forgiveness, and it is only time the court stepped in,” Temple member Lila Ton said outside a Baton Rouge courthouse this week.

Another Temple member, Mya Tran, also spoke outside the courthouse and said female Temple members had been “silenced.”

“I think it’s really important for us to shed light on this situation and not be silent, especially as a younger Buddhist woman,” Tran said, “I look up to a lot of these women, especially for what they did for our.” community, and to see them being so suppressed and silenced in this situation has really upset me.

Temple member Lila Ton speaks outside a courthouse in Baton Rouge this week. She says the Temple community tried to remove Ho but was silenced

The plaintiffs not only prompted en masse exodus of Temple members, but also feared that Ho might misappropriate Temple funds donated by parishioners.

In addition to his own sexual misconduct, the lawsuit alleges that Ho allowed sexual relations between monks and nuns in the temple and flouted vows of celibacy.

The plaintiffs said they had evidence against Ho, including suggestive text messages and nude photos sent between Ho and nuns.

No matter what evidence of bad Buddhist behavior temple members may have, Ho’s lawyers maintain that the court has nothing to do with deciding his fate inside the temple.

“You’ve made a lot of allegations that, as you’ve heard, are none of the court’s business,” Bander said outside the courthouse this week.

“The government doesn’t get to choose who our religious leaders are,” said Tanner Woods, Bander’s co-counsel.

Abbot Quyen Van Ho has headed Tam Bao Temple since 2003. Prosecutors allege that his wrongdoing has continued for years

The Tam Bao Temple in Baton Rouge, Louisiana. The court has ordered the Temple to hold an internal leadership election to decide Ho’s fate