Luciano Spalletti insisted on shaking hands with Massimiliano Allegri after his Napoli side beat Juventus 5-1 on Friday, with the Juventus coach seemingly keen to leave the field.

The Napoli boss tried to catch his opponent’s eyes after the game as Allegri, eyes seemingly glued to the ground, walked towards the tunnel at the Stadio Diego Armando Maradona before finally spotting Spalletti and shaking his hand.

Victor Osimhen continued his unbridled form since the restart by starring for the Neapolitans as their champagne football prevailed against Juventus’ ugly style, with the hosts 10 points clear at the top of Serie A. 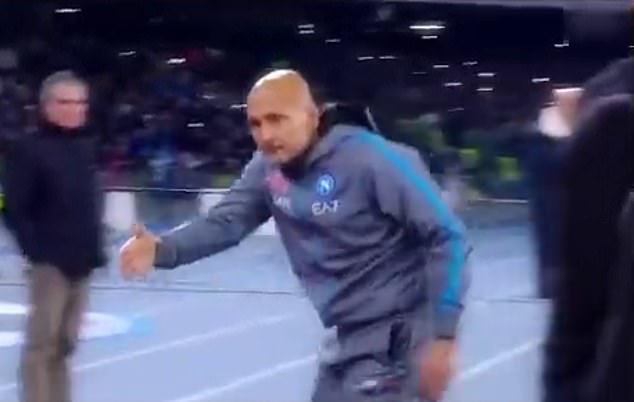 With the game won, Spalletti seemed to offer his hand for an upcoming handshake from his defeated rival, but Allegri seemed to have other plans.

The Juventus boss turned on his heel and marched straight towards the tunnel, leaving Spalletti in the awkward position with his hand outstretched but refusing to let Allegri go without the sporting gesture.

Spalletti then pursued Allegri towards the tunnel for a few seconds, the latter seemingly oblivious to his outstretched hand, before finally seeing the Napoli coach and failing to give him a warm hug.

Juve had come into play and seemed to be in a much tougher position than at the start of the season when they were largely written off as title contenders, winning eight games in a row before meeting the league leaders.

But a brace from Osimhen and goals from Khvicha Kvaratskhelia, Amir Rrahmani and Elif Elmas ensured the streak ended on Friday night.

“The team played a great game and kept up the pace,” Spalletti told DAZN after the game.

“It was a beautiful evening, especially because there was a great audience. The Neapolitans always have our back, but this team was able to recreate the love for these colors.”

With that run of eight straight wins, Juventus had entered the title race, starting the day seven points behind Napoli, level with AC Milan and therefore could have moved up a point to second place.

However, Angel Di Maria’s goal just before half-time to make it 2-1 did not lead to a comeback as the visitors were hit with a sword in the second period.

“It was a deserved defeat because we went into the game with less energy,” said Allegri after his 450th Serie A meeting as coach.

“The situations we conceded were also pretty easy to read and predict, but sometimes luck is on your side and sometimes it isn’t. We tried to turn it around at half-time but Napoli absolutely deserved it (to win).’

'Excuse!' Prince Harry has asked the royal family to apologize to Meghan