Spencer Matthews and Hugo Taylor looked every inch the doting dads on Sunday as they spent the day together with their children.

The Made In Chelsea stars, who have given up partying for family life, took to Instagram to share sweet snaps with their children.

Spencer shares Otto, seven months, Theodore, four, and daughter Gigi, two, with his wife Vogue Williams, whom he met on the Channel 4 show. 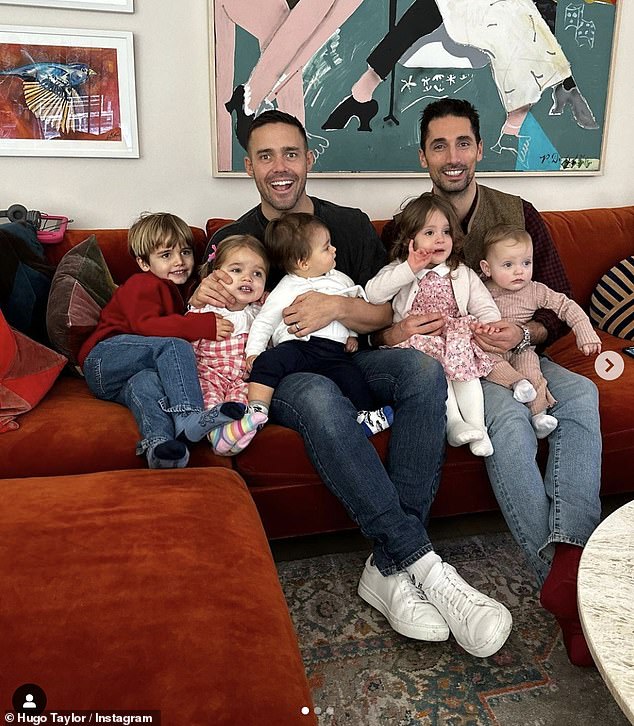 Cute: Spencer Matthews and Hugo Taylor looked every inch the doting dads on Sunday as they spent the day together with their kids

Hugo and his wife Millie Mackintosh, who also met on the reality show, share Sienna Grace and Aurelia Violet.

Alongside the adorable snap of the kids sitting on their dad’s laps, Hugo wrote: “Sunday morning with the whole gang.”

Hugo and Millie dated briefly during their Made In Chelsea days in 2011, and their relationship ended during a dramatic reality TV showdown in which Millie accused Hugo of cheating on her with best friend Rosie Fortescue.

Alongside the adorable snap of the kids sitting on their dad’s laps, Hugo wrote: “Sunday morning with the whole gang.”

The couple reunited in May 2016 shortly after Millie’s split from her first husband, rapper Professor Green, 38.

The former TV personality was married to musician Stephen Manderson for two and a half years before they announced their split in February 2016.

Millie and Hugo married at Whithurst Park in June 2018, a year after he proposed while vacationing on the Greek island of Mykonos.

Family: The kids enjoyed a fun playdate while the parents caught up

Happy family: Since tying the knot, Millie and her former Made In Chelsea co-star husband have become the proud parents of their two adorable little girls (pictured in June)

Spencer and Vogue have been together since they met at Channel 4’s celebrity ski competition The Jump in early 2017.

They announced their engagement in February 2018 and married in June 2018 in a secret ceremony in the Scottish Highlands on Spencer’s family’s 30,000-acre estate.

Vogue told MailOnline earlier this year that she is looking to add a fourth addition to her family after tying the knot with Otto in April.

Happy family: Otto, seven months, is the youngest of Spencer and Vogue’s three children; They are also the proud parents of son Theodore (4) and daughter Gigi (2).

In an exclusive interview, Vogue said: “I would have a million kids, I love having kids around and having a big family.

“I hate the thought of never having a baby again because I love the whole newborn phase. Being a mom is literally my favorite thing in the world.

“I’d like to think we have another one, but now I have to see how we do as a family of five. I had a nice job with Otto.

“I had a great day with Spencer. I’ve been loving all day I went to the hospital thinking I would do this as a job if only I could give birth to other people – and not be pregnant – I would love to do it.

“We were lucky because I know it’s not the same for everyone. It hurts, the gas and air was great fun and I did that and ended up getting an epidural which was very much needed.”

Romance: Spencer and Vogue announced their engagement in February 2018 and married in June 2018 in a secret ceremony in the Scottish Highlands at Spencer’s family’s 30,000-acre estate

https://www.dailymail.co.uk/tvshowbiz/article-11637615/Made-Chelseas-Spencer-Matthews-Hugo-Taylor-share-sweet-snap-kids.html?ns_mchannel=rss&ns_campaign=1490&ito=1490 Made In Chelsea’s Spencer Matthews and Hugo Taylor share sweet snaps with their kids

The Simple 5 Minute Breathing Exercise That Will Make You Happy (It's Even Better Than Meditation!)