A 34-year-old man has been arrested on suspicion of murder and attempted murder in connection with the killing of nine-year-old Olivia Pratt-Korbel, Merseyside Police said today.

A second man, 41, was also arrested on suspicion of aiding and abetting a perpetrator. Both were arrested in Runcorn, south-west Liverpool, in the early hours of this morning.

Both remain in custody, the 34-year-old is being questioned by detectives.

Olivia was shot in the chest on August 22 by a balaclava-clad gunman chasing a former burglar who had been released from prison on license in the city’s Dovecot area in an alleged gangland feud.

The killer was stalking 35-year-old Joseph Nee, who made his way inside after noticing Olivia’s mother, 46-year-old Cheryl Korbel, had opened the door to see what was going on outside.

The gunman shot into the home, hitting Olivia, her mother Cheryl in the wrist and the 35-year-old fleeing 35-year-old in the upper body.

A 41-year-old man from Knowsley was arrested on suspicion of being an accessory to a criminal and is also in custody. 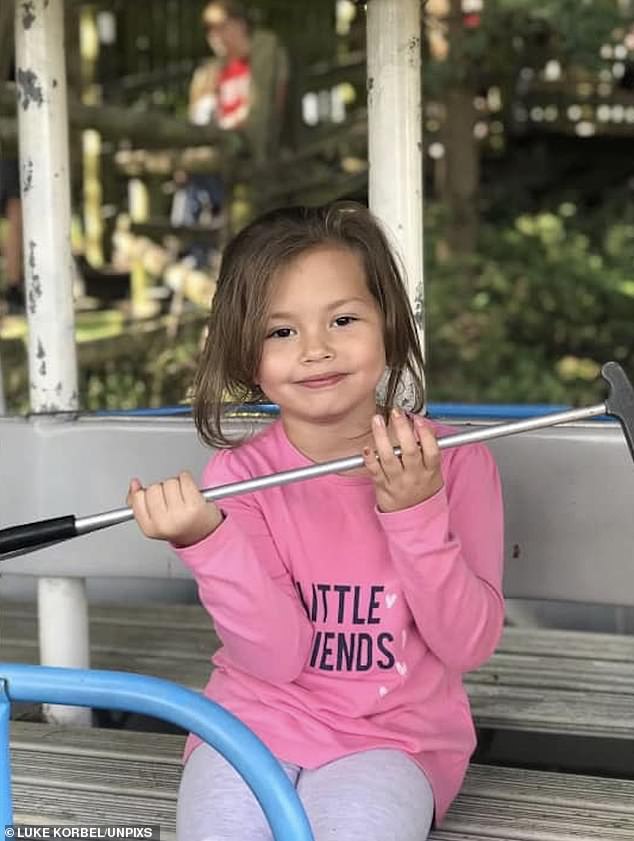 Olivia Pratt-Korbel, 9, was shot dead in her own home after a gun chase swept through her family’s home

Joseph Nee, 35, entered Olivia’s home to flee the gunman who was chasing him after her mother opened the door to see what the noise was outside

It is understood Nee’s staff took him to the hospital in a car after the shooting, leaving little Olivia behind.

Police said officers picked up Olivia and took her to Alder Hey Children’s Hospital in the back of a police car, but the nine-year-old was pronounced dead an hour later.

An autopsy determined her medical cause of death was a gunshot wound to the chest.

Officials previously shared CCTV footage of two men they wanted to follow in connection with the tragic incident – one of whom was in the area at the time while the other was wanted as a suspect.

They also appealed directly to the shooter’s criminal allies to report the killer.

The death of the youngster has caused sadness and shock in the Merseyside community. Many laid wreaths and left cards near Olivia’s family home, and more than 200 mourners attended a vigil in her memory last night.

Detective Kameen warned those “shielding” the perpetrator that officers will “do everything lawful to bring you to justice”.

“It’s incomprehensible how anyone can protect a person responsible for the killing of a nine-year-old little girl,” he added.

Detective Chief Superintendent and Lead Investigator Mark Kameen said: “I continue to urge anyone with information that may assist our investigation into the tragic murder of Olivia to please come forward so we can bring those responsible to justice.

“Several people have been arrested in connection with this investigation. However, we still need the public’s help to ensure we can build a strong body of evidence to bring justice to Olivia and her family.

“This is my appeal to those who have information, no matter how small, that may further assist our inquiries to contact us directly or anonymously and we will do the rest.

“The investigation into Olivia’s tragic murder is ongoing and we have yet to build a strong body of evidence before we can bring those responsible to justice.”

Ahead of the early hours arrests, Detective Kameen of Merseyside Police detailed the hunt for the killer by releasing CCTV footage to the public.

He said: “I’m going to show you footage of the man who murdered little Olivia. I’m doing this because people might recognize what he’s wearing.

“It might also help people remember seeing him in the area the night of Olivia’s murder and help us understand where he went next.”

Police say the footage shows the gunman running down Finch Lane off Kingsheath Avenue and then turning right onto Berryford Road, where he disappeared from sight.

“We know he climbs in and through people’s gardens to avoid being seen,” he said.

A 36-year-old man from Huyton and a 33-year-old from Dovecot, who were previously arrested on suspicion of murder and two counts of attempted murder in connection with Olivia’s death, have been released on bail.

Anyone with information is asked to contact Merseyside Police or @CrimestoppersUK on 0800 555 111.

https://www.dailymail.co.uk/news/article-11178623/Man-34-arrested-suspicion-murder-Olivia-Pratt-Korbel-shot-dead-home.html?ns_mchannel=rss&ns_campaign=1490&ito=1490 Man, 34, arrested on suspicion of murder after Olivia Pratt-Korbel was shot dead at her home

Woman, 19, speaks after being beaten by a mob of youths in South Norwood, Croydon, London