Cristiano Ronaldo suffers a HORROR injury in Portugal’s win over the Czech Republic, with the Man United star’s face bloodied after a clash with goalkeeper Tomas Vaclik… but the striker still made it through the full 90 minutes

By David Wood for MailOnline

Portugal star Cristiano Ronaldo was covered in blood after a violent clash with Czech goalkeeper Tomas Vaclik on Saturday night.

The Manchester United striker went down after the mid-air clash in the 13th minute of the Nations League clash.

He was left bleeding, bruised and dazed on the lawn. 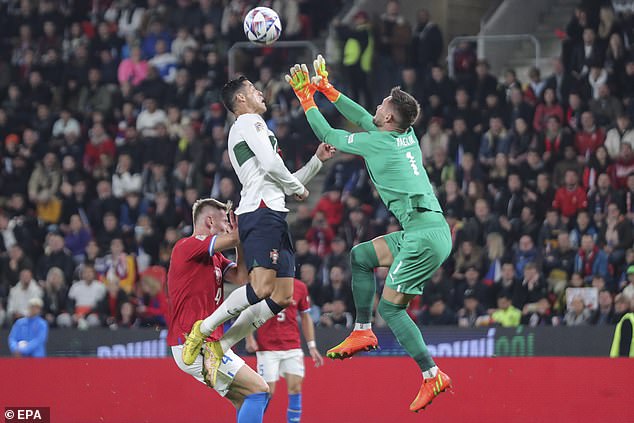 To anyone who’s worried, Cristiano Ronaldo is fine.

Despite the difficult spectacle, the Portuguese striker recovered from his injury and continued playing as usual against the Czech Republic. pic.twitter.com/1JP6rP6IvH

Ronaldo required medical attention on the pitch but later returned with a bandage on his nose.

And he was soon back in the thick of things when he conceded a penalty after a handball, although Patrik Schick missed from the penalty spot.

Portugal emerged 4-0 winners to set up a showdown at home against Spain on Tuesday.

Ronaldo’s shot from a corner was knocked home for a fourth late by Liverpool’s Diogo Jota.

The 2019 winners took full advantage of Spain’s defeat by Switzerland to move two points clear at the top of Group A2.

Portugal need to avoid defeat in their final group game against Spain on Tuesday to reach the semi-finals.