By Simon Jones for the Daily Mail

Manchester United have agreed a loan with Newcastle United with a £5million option for goalkeeper Martin Dubravka.

The 33-year-old Slovakia international will travel to Manchester for his medical on Tuesday after Newcastle gave way to now wanting a £5million fee.

Dubravka had asked Newcastle to let him go following United’s approach last week. After arriving from Burnley he became an understudy to Nick Pope and wanted a chance to move to Old Trafford where he can challenge David de Gea and Tom Heaton. 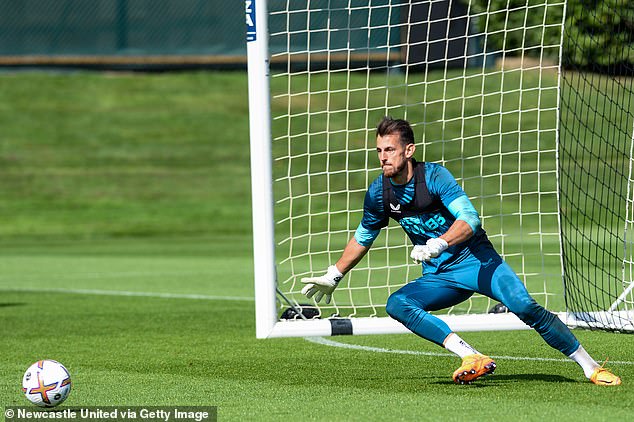 Dubravka was not long ago regarded as one of the better goalkeepers in the Premier League having established himself as number one at St James’ Park.

The goalkeeper had made 130 appearances for Newcastle in all competitions, keeping 37 clean sheets.

United hope to complete two new signings by Tuesday night, with Ajax winger Antony on his way to a medical tonight.

United have agreed to pay £84.4million for the Brazilian after a breakthrough in talks on Sunday.

The attacker was a key target for Erik ten Hag but they struggled to agree a deal with Ajax after multiple offers were rejected before the breakthrough.