There’s that roar again! New £85.5million Mann United hero Antony celebrates in front of the cameras on a night out on the town, with a sumptuous steak dinner topping his brilliant debut day

Antony was still celebrating his debut goal for Manchester United on Sunday night after enjoying a dinner with friends to mark his perfect start at Old Trafford.

The Brazilian, who joined the club in a deal worth £85.5million from Ajax last week, scored the opener in his first appearance as United extended their Premier League winning streak to four games with a win over leaders Arsenal.

Antony had apparently enjoyed his first taste of life as a United player in front of a boisterous home crowd when he returned from dinner at Manchester’s Hawksmoor Steakhouse, where a fillet steak can cost up to £39.75 and a cocktail £15. 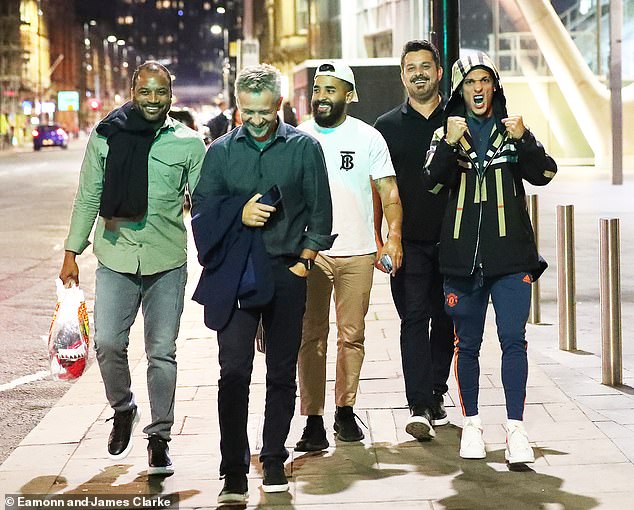 Antony has just arrived at the club and is currently staying at The Lowry Hotel, notorious for being Jose Mourinho’s residence during his tenure as United boss.

As Antony strolled the streets of his new town he was alongside five friends who all looked equally delighted after the day’s events.

The new United hero was still donning his club tracksuit when a photographer snapped him roaring with delight and clenching his fists for the camera.

Antony’s delight at his move to United was shown last week when the Brazilian admitted how badly he and his family wanted to bring him to England.

However, United fans were treated to a display of skill and passion as their new Brazilian hero scored within 35 minutes of his debut for the club.

“You can see his full potential,” said Ten Hag about Antony after the game.

“He will be a threat in the Premier League. We were missing a player on the right wing. [Jadon] Sancho and [Marcus] Rashford can play there but they prefer left so now we have the missing link who can play well on the right,” he added.

“We needed that on the right wing with his pace, his dribbling and his expression. It (the Premier League) will be a challenge for him but we saw his potential. We have to keep pushing. I set high standards every day. Everyone has to bring it to Carrington every day.”

Despite being dominated for most of the opening period, United met Arsenal at the break, with Antony appearing to have already developed a relationship with fellow attackers Rashford, Bruno Fernandes and Sancho.

Arsenal came to Old Trafford after five straight wins, the only side to start the league season in perfect form. However, their dominance didn’t pay off as they suffered three counter hits.

Although Bukayo Saka equalized midway through the second half, Rashford’s speed and United attacking midfielders’ power United found a way to victory.

The result means United have won their last four and, after a devilish start that saw them lose at home to Brighton, have risen to fifth in the league table before a comprehensive 4-0 defeat at Brentford.

They travel to Crystal Palace on Sunday after their Europa League season got underway at home against Real Sociedad this week.

When does Fortnite Chapter 3 Season 4 begin?

Australian teenager jailed in US jail for 10 days over visa issues: Cameron Carter