Man United goalkeeper David de Gea ‘could leave for FREE’ at the end of the season… as the Red Devils ‘consider extending his current contract for a further 12 months’ after the club offered a 19.1% pay rise last year had announced

Manchester United are yet to decide on David de Gea’s future at Old Trafford as the club consider extending his current contract by a year.

The Spanish goalkeeper’s current United deal expires at the end of the season and they are currently risking letting one of their most important figures go for nothing in nine months time.

United earlier this week announced payroll increases of £61.6m year-on-year – up 19.1% – as a result of high-profile acquisitions and De Gea’s current deal netted him around £350,000 a week last season. 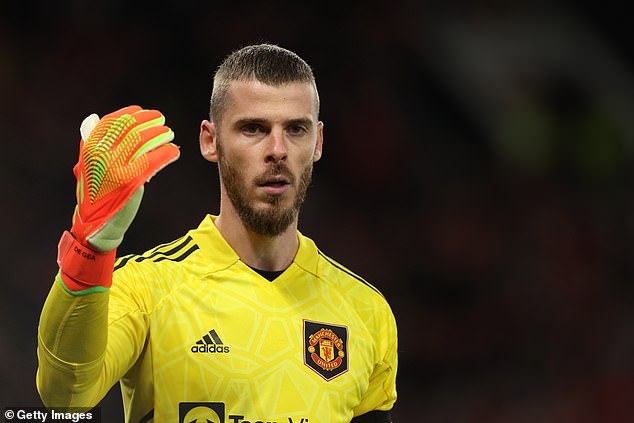 During his 11-year stint at Old Trafford, the Spain goalkeeper has worked his way up to the top of the pile in the United dressing room and is the only remaining player from the club’s last title-winning team to play regularly.

But his staggering wages could prove a hindrance going forward as United declared £115.5million in losses earlier this week.

Despite several high-profile mistakes in his United career, including a costly mistake at Brentford in the second game of the season, he has already had the support of his manager Erik ten Hag, who claimed: ‘I’m convinced he can do it.’

The Red Devils appeared to have a successor in the wings in Dean Henderson before he publicly criticized his perception of how the club were treating him after a loan move to Nottingham Forest.

The England goalkeeper blew up at the club in August, saying: “It’s probably been the toughest 12 months of my career, to be perfectly honest. It was tough, it was tough and I’m so happy that I got out of the other end now.

“The conversation I had coming out of the Euro squad (with England) was you come back here (to United) to be the No. 1 goalkeeper. I got Covid then unfortunately nobody followed everything they told me.

“It’s also frustrating because last summer I turned down so many good loans for this reason and they wouldn’t let me go. Sitting there and wasting 12 months is really criminal at my age. I was angry.”

As a result, Everton’s Jordan Pickford’s future becomes all the more attractive for United with the England goalkeeper’s contract expiring at the end of 2023/24 and the Toffees will surely be looking to capitalize on one of their most valuable players until then.

At 28, the former Sunderland stopper has not yet reached his goalkeeping prime and as a homegrown player he would help any club in European competitions when it comes to player registrations.

However, it would still be a surprise if United let De Gea – who was voted club player of the season four times between 2013 and 2018 – go for free at the end of his contract.

In 11 years at the club, De Gea has won the Premier League, Europa League, FA Cup and Carabao Cup, as well as three Community Shields and kept 168 clean sheets in 495 games.

Jordan Pickford, 28, is sparking interest with his own contract due to expire in late 2023-24

https://www.dailymail.co.uk/sport/football/article-11245931/Manchester-Uniteds-Spanish-goalkeeper-David-Gea-leave-FREE-end-season.html?ns_mchannel=rss&ns_campaign=1490&ito=1490 Manchester United’s Spain goalkeeper David de Gea could leave for FREE at the end of the season.