Araiza, 22, was accused along with two others of the gang rape of a 17-year-old girl last year in a civil lawsuit filed on Thursday and was released by the team on Saturday.

The lawsuit, filed in San Diego County Superior Court, accuses Araiza and his then SDSU teammates Zavier Leonard and Nowlin ‘Pa’a’ Ewaliko of raping the teen at a Halloween party in 2021.

Araiza’s lawyer, Kerry Armstrong, told DailyMail.com that he has witnesses who would refute the claims made in the lawsuit, including allegations that Araiza spiked the teenager’s drink and led her into a bedroom. 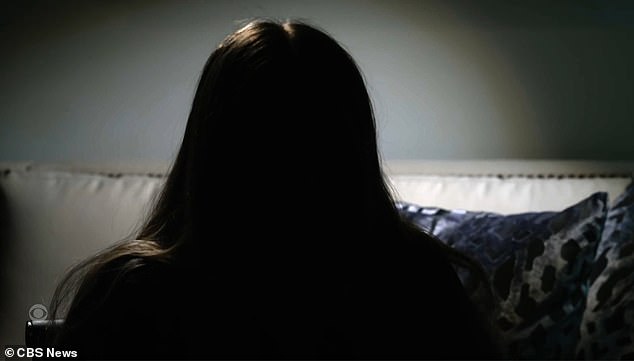 In a new interview with CBS News, the unnamed woman said, “I was crying and my boyfriend was asking me what happened. And I told her, “I just got raped”

Araiza, 22, was accused along with two others of the gang rape of a 17-year-old girl last year in a civil lawsuit filed on Thursday

The victim said in the interview: “I had to deal with this terrible traumatic experience, which I never asked for.”

A lawsuit regarding the allegations, filed in San Diego County Superior Court, accuses Araiza, Zavier Leonard and Nowlin ‘Pa’a’ Ewaliko of raping the teen at a Halloween party at that home

In an exclusive statement, Armstrong said: “Matt never offered or gave her anything to drink. He has never put drugs or substances in a drink. He never took her into a bedroom in the house. And he definitely never raped her in any form.’

Armstrong continued, “In fact, he was never in a bedroom of the house that night. From what I’ve seen so far, the accuser is the only one who says he did it.’

“I don’t know what happened to that young lady in the bedroom of the house, but I do know that Araiza had nothing to do with it,” the attorney continued.

The attorney’s testimony came after the bombshell interview the victim, known only as Jane Doe, gave to CBS News on Aug. 29.

She told the network: “I was crying and my boyfriend was asking me what happened. And I told her, “I just got raped.”

Araiza’s attorney said of the victim’s allegations, “I don’t know what happened to that young lady in the bedroom of the house, but I do know that Araiza had nothing to do with it.”

The teenager shared photos showing her bruises and injuries after their encounter.

In screenshots from her journal, the teen wrote after the encounter, “All I keep imagining is lying face down in some random bed just waiting for it to be over.”

She told the network, “I had to deal with this horrific traumatic experience that I never asked for.”

In a separate interview, Araizia’s attorney, Kerry Armstrong, told CBS that he doesn’t expect his client to be charged with a crime.

Armstrong said, “If she really was raped in that back bedroom, that’s awful. It’s a terrible thing to happen to anyone.’

He continued, “But all I know is that Mr. Araiza had nothing to do with it and the only thing I can think of why she put him in this civil lawsuit is for the money.”

When the issue of money was sacrificed, she told CBS News that she felt “stomach sickness.”

She continued, “I reported it the day after it happened. I was 17 and had no idea who Matt Araiza was.”

The woman concluded, “I cannot put into words how upsetting it was when I was faced with consequences for his actions.”

Araiza’s college football coach Brady Hoke said Monday he was unaware the star punter had been accused of taking part in the gang rape until the civil suit was filed.

At the time of writing, Araiza has not been charged with a felony by the San Diego Attorney’s Office.

According to the Los Angeles Times, which first reported on the lawsuit, a criminal investigation into the allegations is ongoing. No arrests have been made and the San Diego Police Department has not publicly identified any suspects.

Araiza would not be subject to the NFL’s personal conduct policy for the alleged rape, which occurred in 2021 before he was a league player.

The lawsuit says the teenager had been drinking with friends when they decided to go to the party on Oct. 17 and that she was “visibly drunk on arrival.” She was separated from her friends and approached by Araiza, who offered her a drink, according to the lawsuit.

She told Araiza, who was 21 at the time, that she was a high school grad, according to the lawsuit. She claims he then led her to a side yard where he asked her to perform oral sex and then had sex with her before taking her to a bedroom in the house.

According to the complaint, there were at least three other men in the room, including Leonard and Ewaliko. The lawsuit states that Araiza threw the teenager onto the bed and she passed out during the rape. It added: “But she remembers some moments of the horrifying gang rape.”

She immediately told her friends about the rape and reported it to police the next day and underwent a rape investigation, according to the lawsuit. Officials trained her to call Araiza, which she did 10 days later when detectives recorded it, according to the complaint.

During the call, Araiza admitted to having sex with her, the lawsuit states, but later when she asked him, “And did we have real sex?” he replied: “This is Matt Araiza. I don’t remember anything that happened that night’ and hung up.

But before she hung up, Araiza urged Doe to get tested for chlamydia.

The parents of deleted Buffalo Bills star Matt Araiza issue an angry statement defending their son amid gang rape allegations by a 17-year-old and reveal their entire family has faced death threats: “The rule of law is innocent until their… guilt is proven.”

The parents of canceled Buffalo Bills kicker Matt Araiza have issued a cruel statement defending their son amid allegations he was involved in the gang rape of a 17-year-old girl last year.

The 22-year-old punter was released by Super Bowl favorites Bills on Saturday and his career is in tatters as he awaits further news on last Thursday’s civil lawsuit.

Amid the backlash, Araiza’s parents have now released a statement of their own to the media, revealing death threats to her entire family and repeating that their son should be “innocent until proven guilty”.

The message goes on to explain the “vitriol” Araiza has received since the allegations were made public and asks why the former Bills star is the “only one receiving this type of treatment” and seems to the other two who do as well the gang are accused of nodding rape.

Her son’s staunch defense concludes by speaking of “salacious rumors growing as facts,” before adding, “There are several witness accounts that dispute the allegations made against him. The legal system is designed to find facts and make decisions. They should be allowed to do that.’

https://www.dailymail.co.uk/news/article-11158993/Matt-Araizas-lawyer-slams-claim-gang-rape-17-year-old-girl.html?ns_mchannel=rss&ns_campaign=1490&ito=1490 Matt Araiza’s lawyer has criticized claims he was involved in the gang rape of a 17-year-old girl

Is Breaking Bad in Fortnite?