Police have confirmed they are investigating the stunning confrontation between Michael Clarke and his girlfriend Jade Yarbrough where the shirtless ex-Australian cricket captain was slapped during a blazing row.

Extraordinary footage emerged on Wednesday of a heated exchange between the couple in a public park in Noosa, with Jade accusing Clarke, 41, of sleeping with his ex Edwards behind her back on December 17.

‘Queensland Police are investigating an incident between a 30-year-old woman and 41-year-old man depicted in footage at Lions Park on Gympie Terrace in Noosaville earlier this month,’ police said.

‘As this matter on January 10, 2023 is under investigation the Queensland Police Service is unable to provide any further comment.’

Meanwhile, it has been revealed that Pip Edwards posted a saucy selfie the same day Yarbrough accused Clarke of cheating on her with the P.E Nation designer.

Edwards, 42, shared a steamy mirror selfie as she headed to a wild party with her friends. 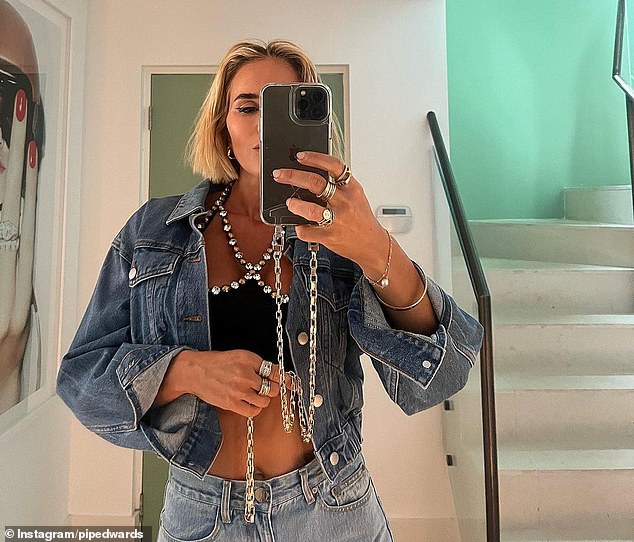 In the photo, the fashion entrepreneur was seen wearing denim jeans with a matching jacket and a black top encrusted with large diamantes, all by Area NYC.

Accessorising with stacked rings and bracelets, Edwards held her phone in front of her face as a thick chain hung down from the case.

‘Denim and Diamonds,’ the December 17 post was captioned, referring to a denim-themed party she was attending at The Establishment in Sydney’s CBD.

She has since turned the comments off for the photo.

On Wednesday night, dramatic footage, obtained by the Daily Telegraph, showed a  shirtless Clarke being screamed at and slapped by his furious girlfriend Jade.

Others in the group, including Karl Stefanovic his partner Jasmine, who is also Jade’s sister, and celebrity accountant Anthony Bell, try to defuse the fracas.

The melee was over Clarke’s ex-Edwards, with Jade accusing the former cricket star of cheating with her.

Dramatic footage leaked on Wednesday showed a shirtless Clarke being slapped by his angry girlfriend Jade Yarbrough. The melee was over Clarke’s ex-girlfriend Pip Edwards, with Jade accusing the former Australian cricket captain of cheating with the P.E Nation designer

A now-viral video shows Yarbrough accusing Clarke of sleeping with Edwards on December 17 and messaging her to say she is the ‘love of his life’.

The video begins with Yarbrough screaming at Clarke before she slaps him in the face and pushes him away after the cricketer insists he didn’t cheated on her.

‘I’m wrong? I’m f**king wrong! You’re a f***ing liar. I can see everything. You called her,’ she screams, apparently referring to messages between Clarke and Edwards.

Clarke then tries to reassure Yarbrough he didn’t seep with Edwards on December 17, saying he was with Bell that night.

He then swore on his daughter Kelsey Lee’s life he did not cheat on her.

But Yarbrough refuses to believe Clarke’s desperate protests and claims she spoke to Pip.

Clarke again denies sleeping with Edwards and replies: ‘No I didn’t. You can hit me. That’s not true, that’s not true.’

He appeared to have injured his hamstring in the melee after he was pushed to the ground by Yarbrough, as he was seen hobbling across the public park.

Stefanovic’s wife Jasmine eventually steps in and grabs her distressed sister by the arm and drags her away.

As she is led away, Jade can be heard crying as she turns to Clarke and howls: ‘I f**king hate you.’

Clarke then tries to follow Jade before he unleashes a wave of fury at Stefanovic, seemingly because he is walking away with the two sisters.

This comment sparks fury from Jade, who defends her brother-in-law before slapping Clarke repeatedly in the face.

Stefanovic and Bell can be heard telling the couple to stop, which falls on deaf ears.

Michael Clarke has taken responsibility for the drama, saying he is ‘absolutely gutted’ he has pulled people he holds the ‘highest regard’ into the situation

Pip Edwards, 42, was having none of the drama when she returned to her eastern suburbs home late Wednesday evening. ‘This is not my circus. Yet again, Michael in his true nature has not taken responsibility for his actions and I was blatantly lied to,’ she told Daily Mail Australia

She makes reference to a text she allegedly saw on Clarke’s phone inviting Edwards to come to India with him.

‘Oh yeah, “You’re the love of my life Pip, come to India,”‘ Yarbrough says, to which Clark replies: ‘Don’t ever talk to me again.’

The two-minute clip ends with Jasmine and Bell separating the feuding couple.

The ugly altercation unfolded in front of young children nearby, according to stunned witnesses.

A remorseful Clarke has since taken full responsibility for what happened.

‘I’m absolutely gutted I’ve put people I hold in the highest regard in this position. My actions in the lead-up to this altercation were nothing short of shameful and regrettable,’ he told The Daily Telegraph on Wednesday.

‘I am shattered that because of my actions I’ve drawn women of class and integrity, and my mates, into this situation.’

Daily Mail Australia has contacted all other parties involved for comment.

Meanwhile, Edwards was having none of the drama when she returned to her eastern suburbs home late Wednesday evening after attending Elton John’s Farewell Yellow Brick Road concert at Allianz Stadium in Moore Park.

‘This is not my circus. Yet again, Michael in his true nature has not taken responsibility for his actions and I was blatantly lied to,’ she said in a statement to Daily Mail Australia.

He and Pip had been friends for more than a decade before that, but grew close while working on a fashion project together.

Michael was married to model Kyly Clarke, 40, from 2012 until 2019, but they didn’t announce their separation until February 2020. They are pictured here with their daughter Kelsey Lee

The former couple called it quits in December 2021.

The former Australian Test cricket captain was married to ex-model Kyly, 40, from 2012 until 2019, but the couple didn’t announce their separation until February 2020.

The Clarkes had kept their separation quiet for several months before she put out a statement on Instagram saying their priority was their daughter.

In a statement at the time, the pair said the ‘amicable’ decision to separate was ‘the best course’ for their daughter.

The Clarkes had kept their separation quiet for several months before she put out a statement on Instagram saying their priority was their daughter. Pictured: Kyly and daughter Kelsey Lee