Eddie Jordan has claimed his plans to visit Michael Schumacher’s home were rejected by the seven-time Formula One champion’s wife, Corinna.

Schumacher suffered a skiing accident in December 2013 and was placed in a medically induced coma.

He was taken to the family home on Lake Geneva in September 2014, where a team of medical staff are now assisting Corinna in caring for the 53-year-old.

Jordan, who is loosely linked to the Schumacher family, has now claimed he tried to pay a visit to the ailing driver, only to see his request was denied.

“Corina [Schumacher, Michael’s wife]was a friend of our driver Heinz-Harald Frentzen for a time, who later left and married Schumacher,” Jordan told the Irish Daily Mirror.

“So there was a connection and I reached out and at one point I asked if it was appropriate and if I think we should go see him?

“The answer was no. No visits for anyone at this moment other than actual immediate family. 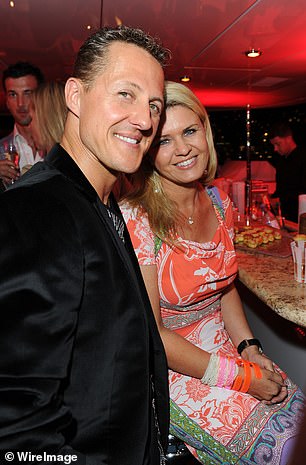 “But since then young Mick Schumacher – Michael’s son – has approached me and he has been exceptional.”

Schumacher’s health remains private at the request of his family, and so few details are being released about the current state of his condition.

But ex-FIA President Jean Todt, who said in May 2021 that he visits Schumacher twice a month, has revealed the German is “in the best of hands” with the medical team working at his home.

Todt told the German publication Bild: “I’m happy that the fans, not only in Germany, think of him so much.

“People ask about Michael so much. The fans should know that he is in the best hands.

“At best, he can be surrounded by people who love him.”

Schumacher and Todt have enjoyed a long-standing relationship at Ferrari – where the German driver won an unprecedented five consecutive world titles between 2000 and 2004.

It has been revealed that the couple watch Formula 1 races together when Todt is visiting.

In July, Todt, together with Schumacher’s wife Corinna and daughter Gina, accepted the State Prize of the State of North Rhine-Westphalia for the former Jordan, Benetton, Ferrari and Mercedes racing driver.

It is the highest civilian honor for those born in the region and can be awarded to anyone who has made an outstanding contribution to the world.

The ceremony took place in Cologne, around six kilometers from Hürth, where Schumacher and his brother Ralf were born.

https://www.dailymail.co.uk/sport/sportsnews/article-11168623/Michael-Schumacher-family-rule-visits-place-wife-Corinna.html?ns_mchannel=rss&ns_campaign=1490&ito=1490 Michael Schumacher has a “families only” rule on visits that was introduced by Ms. Corinna