A new study has found that the average wealth of millennials was lower than that of any other generation after entering the workforce during the Great Recession.

The report, released by the National Bureau of Economic Research, concluded that those born between 1981 and 1996 had less average wealth than all other age groups in the workforce in 2016, with those 75 and older having the most wealth.

Researchers said that key factors limiting millennial wealth included the impact of the Great Recession of 2007, which hit indebted young workers harder than older, more established Americans, some of whom experienced wealth gains of up to 60 percent after the Recession.

It comes as the Biden administration is addressing the latter issue after announcing forgiveness of $10,000-$20,000 in student loans. 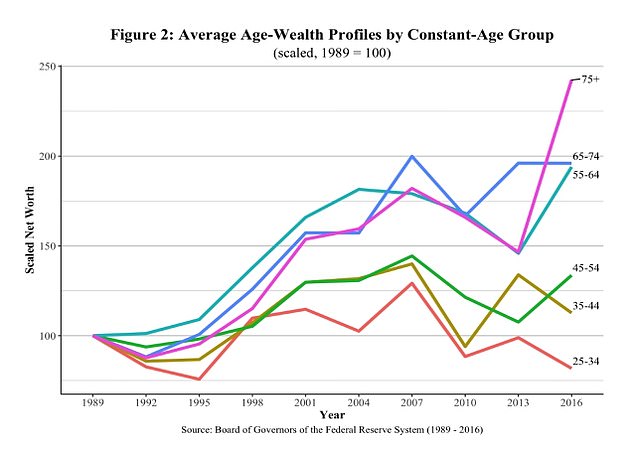 According to the NBER report, millennials suffered the most as the Great Recession reduced wealth across all age groups as they were just entering the workforce.

The Great Recession, which lasted until 2009, created an unstable economy where millennials struggled to find jobs outside of college and started their careers with lower average wages.

Unlike other age groups that have bounced back, millennials’ average wealth continued to decline, a scenario likely to repeat itself after the COVID-19 economic shutdown in 2020.

“Between the Great Recession and the COVID pandemic, adult millennials have already experienced two major economic disruptions,” the researchers write.

“Substantial economic inequality was an enduring part of millennial adulthood.

“While each generation faces its own unique set of opportunities and challenges, many people feel that the obstacles faced by the millennial generation are particularly acute.”

Finally, the researchers found that the younger generation’s paths to wealth accumulation “become more and more delayed over the course of their lives.”

Millennials and younger generations study longer on average, resulting in delayed entry into the labor market and higher student debt.

The average borrower who graduated from a four-year public college retained $26,700 in debt in 2020, an 18 percent increase from the average two decades ago, according to the College Board.

Millennials continue to marry, buy houses and receive inheritances later in life when they are much older as their parents live longer.

However, the NBER report notes that inheritance will only have a meaningful impact on the wealth of higher-income millennials, leaving about 80 percent without a large increase in their wealth.

The researchers also found that minorities, who typically face greater economic challenges than their white counterparts, make up a larger proportion of millennials compared to older generations.

‘Our finding that wealth disparities between whites and minorities appear to have increased over time is consistent with a substantial body of literature,’ the researchers write.

“The widening of the gap, at least over the past decade, seems to reflect the decline in housing wealth during the Great Recession, which hit low-wealth households more than high-wealth households.”

The study concluded that a wide range of policy measures would be needed to reduce the wealth gap, including inheritance tax reform and student loan forgiveness.

Biden’s plan was related to the fifth and final extension of the federal student loan repayment moratorium, which will end in January 2023

Biden on Wednesday announced a waiver of up to $10,000 for borrowers who make less than $125,000 individually or $250,000 combined. Those with Pell Grants are eligible for $20,000 in federal student loan debt, which will be eliminated in Biden’s new plan.

It is estimated that the relief will cost American taxpayers as much as $600 billion over the next decade, and a separate analysis finds that individuals – even those who did not benefit from the enactment – ended up paying more than $2,000 in dollars will pay to pay off the debt.

Republicans’ biggest criticism of the plan is that it’s not fair for Americans who haven’t gone to college or worked hard and planned accordingly to be able to pay college or pay their debts on time.

The GOP claims these Americans are being penalized for sound financial planning.

Some Democrats also agree with this view.

Democratic Rep. Tim Ryan, who is running for the open Senate seat in Ohio, said in a statement last week that Biden’s relief plan “sends the wrong message to millions of Ohioans who don’t have a degree that works just as hard to make ends meet.” come”.

While most mainstream Democrats are urging President Biden to leave behind Americans who don’t benefit from the relief plan, more progressive members say the plan is insufficient to contain the student loan crisis.

“Well, the truth is, in a way, criticism is right,” Sanders told ABC’s This Week on Sunday morning.

The answer to the debt crisis, according to Sanders, is “not to refuse help to people who can’t cope with this horrendous student debt”.

Sanders claims the relief will disproportionately benefit those in higher income brackets, but the Biden administration insists that the bulk of people receiving blanket forgiveness are those earning less than $75,000.

The forgiveness announcement came at the same time as Biden announced the fifth and final extension of the federal student loan repayment moratorium, which was previously scheduled to end on August 31, 2022.

The extension, the administration noted, is the last of the pandemic — and student loan payments will resume in January 2023.

Outstanding loans and accrued interest were suspended in March 2020 with the start of the coronavirus pandemic.

https://www.dailymail.co.uk/news/article-11160535/Millennials-poorest-generation-People-born-1981-1996-average-wealth.html?ns_mchannel=rss&ns_campaign=1490&ito=1490 Millennials ARE the poorest generation: People born between 1981 and 1996 had less than average wealth