She is known for her edgy style and racy nude Instagram posts.

And Australian model Cat McNeil certainly made a statement as she tied the knot with American basketball player Miles Plumlee in a New York courthouse on Thursday.

The 33-year-old turned heads in a shift dress that slit at the top on both sides to reveal her extensive tattoo collection and long, slender legs. 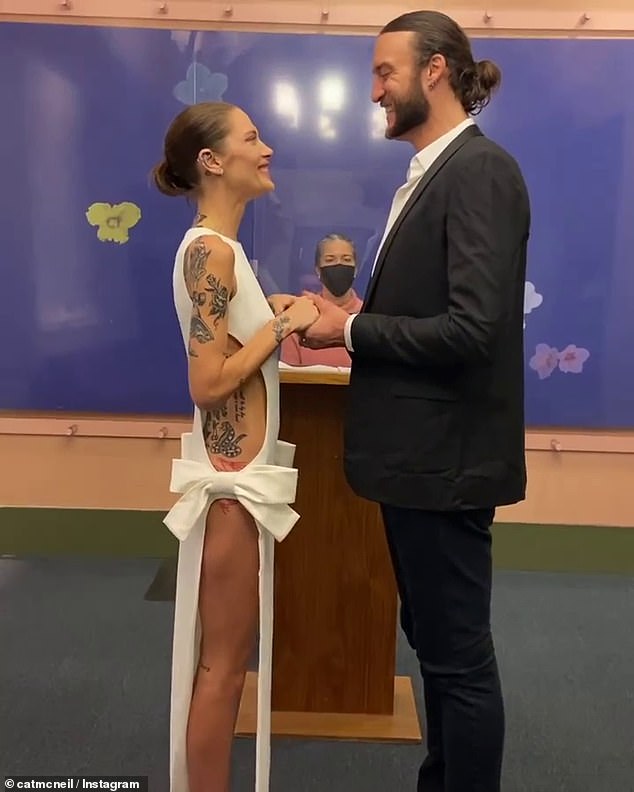 Cat chose to wear the dress completely lingerie free, exposing her nipples and almost her modesty.

The Australia’s Next Top Model star let the dress do the talking by going bare-bones and tying her hair back in a simple bun for her big day.

The 33-year-old turned heads in a shift dress that slit at the top on both sides to reveal her extensive tattoo collection and long, slender legs

Cat chose to go completely underwear-free in the dress, which exposed her nipples and almost her modesty

Cat posted two videos of the wedding to her Instagram page – including one of the couple exchanging vows and another of the happy couple posing for photos outside the courthouse.

She captioned the video: “Mr and Mrs Plumlee. By far the happiest day of my life!!! Thank you to everyone who made this possible. Love you all.’

Many of her famous friends congratulated the beauty, including her ex-fiancé Ruby Rose.

The high-profile couple dated for just over a year and got engaged before splitting in 2010.

After their wedding, the couple hosted a reception at popular Italian restaurant Locanda Verde with their stylish and handsome friends.

They enjoyed a delicious meal, dancing and speeches during which Miles presented his bride with a Rolex watch.

Cat announced her engagement to Miles in June 2022.

She posted a series of pictures of the proposal to Instagram, with her lover, also 33, hugging her as she showed off her diamond sparkler.

“Of course I said YES. @milesplumlee can’t wait to spend the rest of our lives together,” she wrote in the caption.

She is understood to have been dating American Plumlee – a former Duke University NCAA superstar – since 2018.

Plumlee most recently played for the Perth Wildcats in the NBL, winning the national championship in 2020.

After their wedding, the couple hosted a reception at popular Italian restaurant Locanda Verde with their stylish and handsome friends

The couple are believed to now be living on the Sunshine Coast after spending time in Perth.

One of the most sought-after models for more than a decade, Cat returned to the spotlight three years after stepping off the catwalk on a career break in Perth.

The Brisbane-born beauty, who exploded onto the international modeling scene in 2007, decided to retire from the industry for personal reasons at the start of the Covid pandemic.

A Girlfriend Model Search winner at the age of 14, she rose to international superstardom in 2007, appearing on the covers of French and Australian Vogue and running campaigns for fashion giants Versace, D&G, Jean Paul Gaultier and Donna Karan.

They enjoyed a delicious meal, dancing and speeches during which Miles presented his bride with a Rolex watch

The statuesque beauty has long been known for her offbeat style

Cat and Miles announced their engagement in June 2022

https://www.dailymail.co.uk/tvshowbiz/article-11629269/Model-Cat-McNeil-goes-underwear-free-outrageous-wedding-dress-marries-NBA-star.html?ns_mchannel=rss&ns_campaign=1490&ito=1490 Model Cat McNeil wears a cheeky wedding dress with no underwear at her wedding to the NBA star

The Connecticut police officer fired after he was filmed swearing at a woman, accusing her of trying to run him over

Chelsea: Joao Felix's red card made for a disastrous start to the desperate loan spell