Tragic schoolgirl Molly Russell liked suicide videos of “the most disturbing kind” before taking her own life, an inquest heard today.

The 14-year-old schoolgirl from Harrow, north west London, researched self-harm and suicide online before she died in November 2017.

Executives from Meta, the parent company of Instagram and Facebook, and Pinterest have flown in to testify in person at Molly’s inquest at the North London Coroner’s Court.

The investigation will examine algorithms used by social media companies to channel content to users and keep them engaged.

Molly’s family also wants the investigation to consider 29 internal meta-documents purportedly containing research into the effects of self-harm and suicide on teenagers from online material.

Before showing the footage, coroner Andrew Walker warned the court that the videos were “nearly impossible to view.” 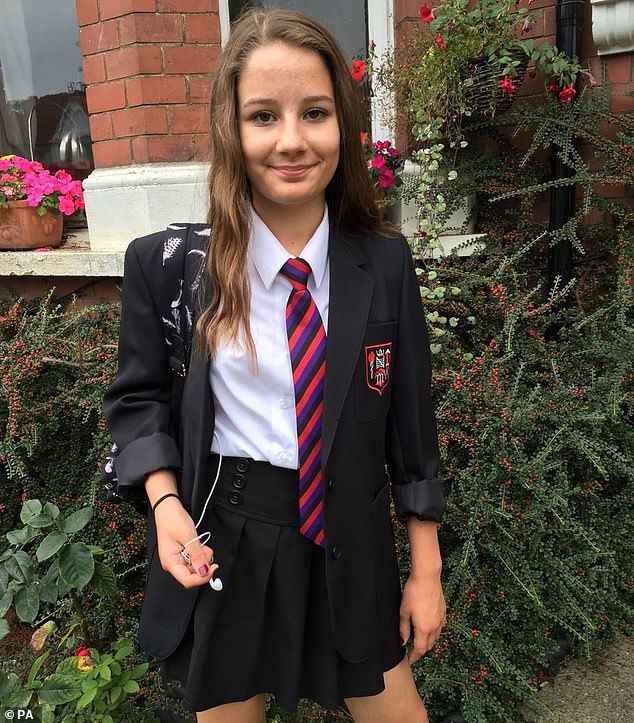 Tragic schoolgirl Molly Russell (pictured above) liked “glorifying” suicide videos “of the most disturbing kind” before taking her own life, an inquiry in London said today

He said: “The video content could be edited but Molly had no such choice. In my view, the video footage should be played as it stands alone.

“Be warned, the footage glorifies suicide. It is of the most embarrassing nature. Watching is almost impossible.

“I say this specifically to members of Molly’s family, but I think the footage should be seen.”

Her family decided to stay in the courtroom while the videos played.

Social media content, all of which Molly “liked” before her suicide, showed people falling off buildings, jumping in front of trains and others hanging from a noose.

Molly, from Harrow, liked disturbing videos she was watching on social media, a court has heard

The words “fat,” “worthless,” and “suicidal” flashed across the screen between videos against a backdrop of aggressive music.

On Friday, head of health and well-being at Instagram’s parent company Meta, Elizabeth Lagone, defended the social media platform’s content policies – saying suicide and self-harm footage could have been posted by a user as a “cry for help”.

Ms Lagone told the court it was an important consideration for the company, even in its policy at the time of Molly’s death, to “consider the wide and incredible damage that can be done if the fighting (of a poster) is silenced”. .

Instagram’s guidelines presented to the court at the time said users were allowed to post content about suicide and self-harm in order to “bring together to support” other users, but not if they were “encouraged or encouraged.”

Ms Lagone then took the witness stand before the coroner said: “My starting point is that the internet is a very dangerous place for those who enter it.

“Every effort should be made to make this journey as safe as possible.”

When asked by family attorney Oliver Sanders KC if it was obvious that it wasn’t safe for children to see “graphic images of suicide,” the executive said, “I don’t know … these are complicated matters.”

Mr Sanders drew the witness’ attention to experts who had informed Meta that it was not safe for children to view the material, before asking: “Have they told you otherwise before?”

Ms Lagone replied: “We have ongoing discussions with them, but there are a number of … topics that we speak to them about.”

Addressing Molly’s family’s claims about internal research, Ms Lagone told the court she was not aware of any research by the tech giant into how content was affecting users of its platforms.

Coroner Andrew Walker questioned the meta executive about investigations into the impact of self-harm content on users and asked if there had been any internal investigations.

She said: “I’m not aware of any specific research on the impact of content. From an ethical point of view, that would be very difficult research.’

Ms Lagone later added: “We are confident that our policies take into account the needs of our youngest users.”

On Thursday, Pinterest’s head of community operations, Judson Hoffman, apologized after admitting the platform was “not secure” when the 14-year-old was using it.

Mr Hoffman said he “deeply regrets” posts Molly viewed on Pinterest before her death, saying it was material he “would not show my children”.

The investigation, which is expected to last up to two weeks, will continue.

https://www.dailymail.co.uk/news/article-11242913/Molly-Russell-liked-posts-glamorised-suicide-killing-inquest-hears.html?ns_mchannel=rss&ns_campaign=1490&ito=1490 Molly Russell “liked” posts that “glorified” suicide before killing herself, the inquest has learned