A woman trapped under rubble for 20 hours after Russian airstrikes destroyed her home could not call for help because she is deaf, her sister says.

A Russian missile destroyed a high-rise civilian apartment building in the central Ukrainian city of Dnipro on Saturday, killing 40 people.

Kateryna ‘Katya’ Zelenska, 27, was later identified by her sister Alina in an image reshared on Instagram.

She said: “This is Katya – my sister! She was only found this morning and thank God she’s alive. She lived with her family in this cursed house on Peremoza!

“She couldn’t call for help because she’s been deaf since childhood!” 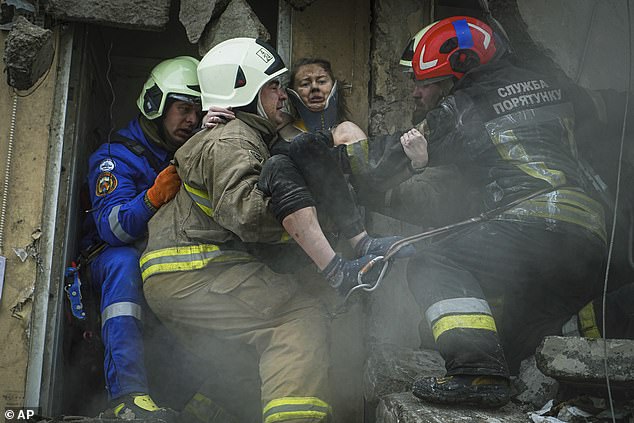 In a photo released by the State Rescue Service of Ukraine, Katya is rescued from the rubble

Russia fired 33 cruise missiles on Saturday, of which 21 were shot down, according to General Valeriy Zaluzhny, the supreme commander of Ukraine’s armed forces.

Kyiv and Kharkiv were also targeted by rocket attacks.

Firefighters in Dnipro worked Saturday night and Sunday day to evacuate survivors and dead from the devastated residential area.

The city’s mayor, Boris Filatov, said today there was a “minimal” chance of finding any more survivors as the death toll has reached 35.

At the time of writing, the number of dead recovered is 40.

75 were confirmed injured, including 14 children.

The condition of 30 residents is still unknown.

Some of those trapped in the building, which housed 1,700 people, were able to attract attention with flashlights on their mobile phones.

Mother Kateryna, who couldn’t cry for help because she is deaf, was found after 20 hours in freezing temperatures with a body temperature of 31C.

The average body temperature of a healthy adult is 37°C.

She was hospitalized and remains in intensive care where doctors are trying to save her life.

Kateryna’s missing son and husband died in the attack, according to the Our City website.

Locals were “shocked” that a residential building with no obvious strategic value would be attacked by Russian forces.

Ivan Garnuk said: “There are no military installations here. Here is nothing. There is no air defense here, no military bases. It only hit civilians, innocent people.’

Dnipro residents joined rescue workers at the scene to help clear the debris. Others brought food and warm clothing for those who had lost their homes.

Liverpool's Virgil van Dijk will do something incredible in FIFA 19