Family, friends and the traveling community mourned the death of Tyson Fury’s cousin today and followed his coffin as it was carried to his funeral in a traditional gold, red and green horse-drawn carriage.

Rico Burton, 31, was stabbed to death outside a bar in Altrincham, Greater Manchester, in the early hours of Sunday August 21. Liam O’Prey, 21, has been charged with murder.

Today, hundreds of Rico’s family and friends gave him an emotional farewell during a service at St Michael’s Church in Flixton.

Mourners, many wearing T-shirts with his face on the front, arrived at the service in carriages and trailers. Mr. Burton’s coffin was carried to the funeral by a horse. Dozens of people followed him, some sitting next to the coffin on Rico’s final journey.

After his death, tributes poured in for Mr Burton, led by the boxer’s famous cousin Tyson Fury. The two-time world heavyweight champion from Wythenshawe also called for an end to knife crime in a post on his social media channels following the tragic death of his cousin. It is not known if Tyson was among the huge crowds. 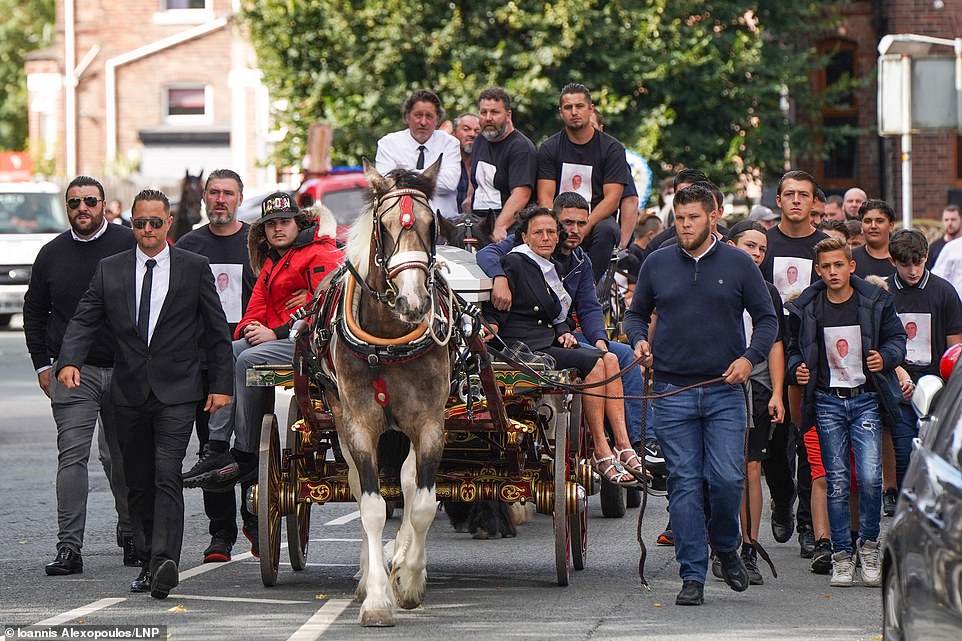 The funeral procession of Tyson Fury’s cousin Rico Burton arrives at St Michael’s Church in Flixton, Greater Manchester, where the coffin was transported on a gold, red and white horse-drawn carriage

Tyson Fury’s cousin Rico Burton (pictured) died in the early hours of August 21 after allegedly being stabbed. His murder was discovered by his cousin, boxer Tyson Fury

Many of the mourners came in their own carriages, and these children wore t-shirts with Rico’s face on them

Another carriage arrives for the funeral, which is attended by hundreds of mourners to pay their respects

Mr Burton – who had himself been a top junior boxer – died around 3.30am after being stabbed in the neck outside a bar in Altrincham, Greater Manchester.

Witnesses said paramedics desperately performed CPR on Mr Rico, but he was pronounced dead at the hospital. Fury, a two-time world champion nicknamed ‘The Gypsy King’, has urged the government to bring back ‘higher penalties’ for the knife crime ‘pandemic’.

“My cousin was murdered, stabbed in the neck,” the boxer wrote on Instagram. “This is getting ridiculous – idiots carry knives. That has to stop.

“The UK Government needs to raise penalties for knife crimes as soon as possible, it’s a pandemic and you don’t know how bad it is until it’s one of you. RIP Rico Burton – may the Lord grant you a good place in heaven see you soon.’

He ended his post with the hashtag “only cowards carry guns”.

Fury, 34, is said to have heard the devastating news while on holiday in Menorca with his wife Paris and father John. A 17-year-old boy, believed to be another relative, was also stabbed in the attack and suffered “life-changing injuries,” police said.

Greater Manchester Police confirmed they had arrested a 21-year-old man at the scene on suspicion of assault.

Liam O’Prey, 21, of no fixed address, has been charged with murder and a range of other offences.

Superintendent Ben Ewart said the force is investigating whether a previous argument led to the fatal stabbing. Sources said it may have been the culmination of a long-running dispute between two traveling families from the community.

A close-up of a flower display in honor of Rico Barton, who was stabbed in the neck outside a pub in Altrincham

This floral tribute was a white floral heart with a blue ribbon and the word “cousin”.

Dozens of floral tributes formed part of the entourage

The funeral at St Michael’s Church Urmston of Rico Barton, who was stabbed in the neck outside a pub in Altrincham

An aerial view shows Greater Manchester Police at the scene of the murder of Rico, cousin of world boxing champion Tyson Fury, in Altrincham last month

Honors poured in for Mr. Burton, a roofer who was also a boxer until he was 19.

Steve Egan, the former coach of Mr Burton and Fury, said he was “devastated”. The 60-year-old said Mr Burton won two national titles as a junior. “He was a fantastic guy… he was such a good fighter,” he added.

Mr Egan added: “From what I’ve heard it was just a minor brawl. A few other guys tried to get into a club and they wouldn’t let them in. The argument wasn’t with Rico, he was trying to calm him down. It was settled, then suddenly the guy stabbed her. It’s incredible, so pointless.’

A witness said: “A couple of men were arguing outside and then suddenly two men were on the ground. It all happened so fast, but no one knows what caused the fight.

Local Michael Edwards said he was woken up by emergency vehicles at 3.30am. Greater Manchester Police have urged anyone who may have seen the attack to come forward.

Latest figures show that knife crime in England and Wales rose by 10 per cent in March this year compared to the 12 months before.