In the past week alone, Prince Harry has given bombshell interviews to ITV, CBS, Good Morning America and People Magazine.

But following the Duke of Sussex’s promotional blitz to promote his new memoir, Spare, the Duchess of York has also given a new interview.

Tonight, Sarah Ferguson gave a behind-the-scenes look at her Retro Radio interview recording, which has yet to air in Budapest this week.

On Instagram, she praised Abaházi Csaba for being “such a great host” and thanked the station team for welcoming her to the studio. 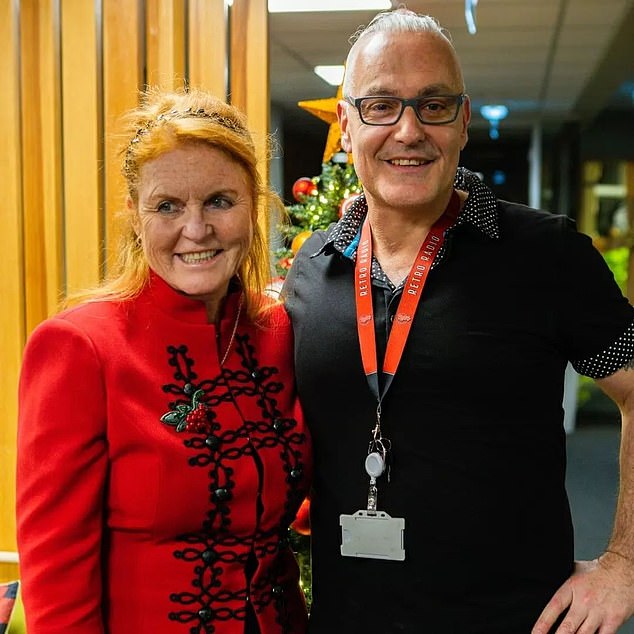 The interview appears to have been promoting Sarah’s upcoming novel, A Most Intriguing Lady, due out this spring.

In one photo, the mother-of-two can be seen signing one of her books with a black pen on the studio’s recording desk.

In another, Sarah appears cheerful as she chats with the show’s host, Abaházi, who stands across from her.

She captioned the post: “We had so much fun recording for Retro Radio in the studio! Don’t worry about me while I remember. Thank you for having Retro Radio and thank you Abaházi Csaba for being such a great host!’

The Duchess of York, 63, headed to Retro Radio in Budapest and reminisced with producers and presenters

On Instagram, she thanked Abaházi Csaba for being “such a great host” and thanked the broadcaster for having her

A second added: “Anytime you feel like being on my show I’d love to have your company.”

During the 90-minute special, the father-of-two accused his family of being “complimentary” in the “pain and suffering” inflicted on his wife and likened her to “abusers.”

Prince Harry insists he “never intended to hurt his family” with the content of his new bombshell memoir Spare – and claims he just wanted to tell his “truth”.

During an interview with 60 Minutes, Harry said he had no choice but to voice his grievances about the royals publicly because when he did so privately, stories “were leaked”.

Hours later, the Duke’s interview with Anderson Cooper was broadcast in the US – in which he claimed he “never intended to harm his family”.

The next day, Prince Harry told Good Morning America that the Queen “knew how difficult it was for him” but hinted that the late monarch was “unable” to take on his and Meghan’s role in the royal family to change.

Following this, Prince Harry’s interview with People magazine – in which he claimed he needed to disclose his 25 Taliban killings for his “own healing” – hit newsstands.

On Tuesday night, Prince Harry appeared on Stephen Colbert’s The Late Show and starred in a skit with Tom Hanks, who poked fun at the royal family with trumpet fanfares and uniformed heralds.

Sarah’s new radio interview comes after she paid tribute to her former mother-in-law, the Queen, in a New Year’s poem.

The poem read: “While the primroses appear so clear on the shores of Windsor to see new beginnings, new ways, new rainbows, you are hidden in our hearts even though you are apart – so welcome 2023 knowing that you are free. Happy New Year.’

Prince Harry kicked off the latest in a long line of television interviews, ridiculing royal tradition and mocking the monarchy – with the help of Hollywood A-lister Tom Hanks

‘The gifts that keep on giving…’: Sarah Ferguson (pictured) shared a series of heartwarming photos with the Queen’s corgis on the morning of her 63rd birthday in October 2022

She then captioned the poem: “We will always miss you dearest friend. You remain in our hearts. Happy New Year.’

On her 63rd birthday in October, Sarah snuggled up to Queen’s corgis and called Muick and Sandy the “gifts that keep giving.”

Although Sarah and Prince Andrew divorced in 1996, the Duchess is said to have remained close to the late Queen.

She spent Christmas 2021 with her and now looks after two of the late Queen’s corgis – Muick and Sandy – alongside her estranged husband. The ex-couple still live at the Royal Lodge in Windsor.

Speaking on the Tea with Twiggy podcast while promoting her Mills & Boon romance novel Her Heart For A Compass, the Duchess previously credited the Queen for being “modern, flexible and forgiving”.

Sarah Ferguson shares emotional New Year’s poem to the late Queen, saying her ‘dearest friend’ is now ‘free’ but ‘in our hearts’