Fury, Washington DC’s new $22m Korean War memorial, is riddled with THOUSANDS of misspellings, has omitted the names of 400 dead – and includes troops who survived

Hundreds of names engraved on a memorial to the Korean War dead were misspelled or omitted altogether, with some survivors’ names erroneously added, a historian said.

Hal Barker, a war historian and founder of the Korean War Project, said he identified 1,000 misspellings and 400 names omitted from the $22 million memorial.

The original Korean War Memorial on the National Mall in Washington DC was dedicated in 1995: an updated memorial with a memorial wall was unveiled in July.

Barker said he was amazed at the scale of the mistakes.

“It gives me a headache,” he told the Washington Post.

“The fact is that we have a memorial that has a large number of errors and there is no way to pay to fix them.” 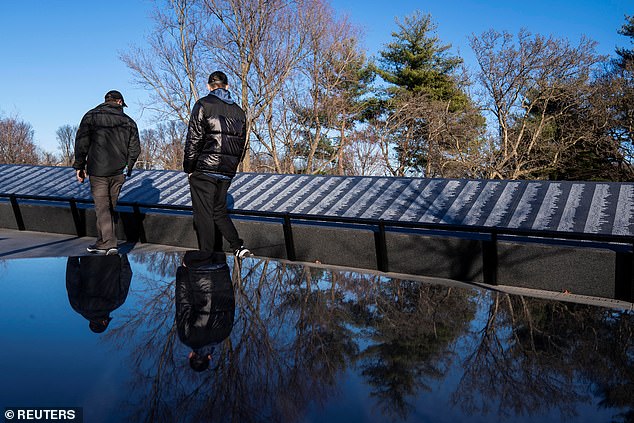 The Korean War was fought from 1950 to 1953 and pitted the United States, South Korea and their allies against North Korea and China, with support from the Soviet Union.

It started when North Korea invaded the South to unite Korea under the communist regime in Pyongyang and the US came to Seoul’s aid.

The US lost 34,000 soldiers during the war and over two million Koreans were killed, civilians and combatants.

The memorial in DC contains 7,100 names of Koreans who were part of the Korean reinforcements to the US Army, in addition to the American names.

Among those omitted from the memorial is Navy Ensign Dwight C. Angell, who was shot down off the coast of China on January 18, 1953 at the age of 24.

Megan Marx, the daughter of Angell’s first wife Gerry, told the newspaper she plans to travel from her home in Colorado on Wednesday to celebrate the 70th anniversary of his death at the memorial — although his name isn’t there.

She was also present at the inauguration in July.

Marx said her mother, who died in 1999, was haunted by Angell’s loss.

“All of these things with Dwight were never far from the surface for her,” she said.

“She never stopped looking for him.”

Those whose names were misspelled include Marine Corps Staff Sgt. Ambrosio Guillen, 23.

Guillen was posthumously awarded the Medal of Honor for Valor, but is spelled Guilien — despite being a local hero in his hometown of El Paso, whose school and veterans center are named after him.